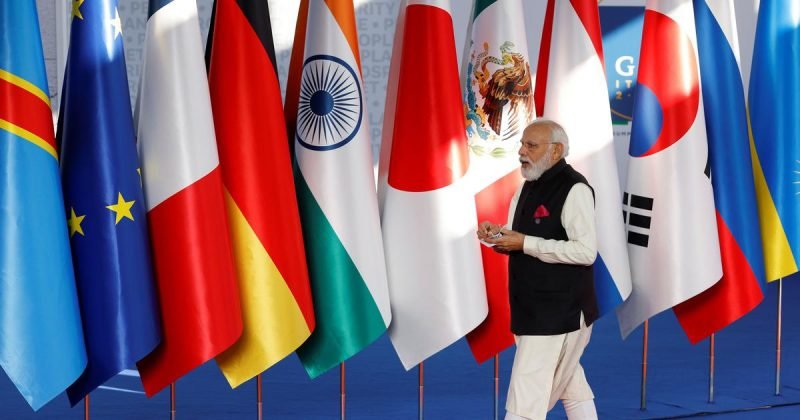 India’s foreign policy is becoming more dynamic and proactive under Prime Minister Narendra Modi’s leadership. Many significant achievements and advances have transformed India’s global positioning. PM Modi’s international outreach efforts have laid a solid platform for advancing India’s economic, strategic, and cultural interests. India’s foreign policy has been granted a new lease on life. The ‘Modi effect’ is now being felt in multilateral forums such as the UN, the G20, the Climate Change regime, and the global trade system. India is now recognized as a significant actor with the potential to be a significant power and a problem-solver. He has brought new hope of peace, stability, and economic success by expanding India’s alliances and collaborations with essential countries in various regions of the world. Under Mr Modi’s able leadership, net Foreign Direct Investment (FDI) inflows into India reached an “all-time high” in April 2016, according to a report by the New York-based Moody’s Investors Service, “reflecting India’s relatively strong growth prospects and government efforts to liberalize foreign investment regulation.

India’s foreign policy under Prime Minister Modi, in my opinion, is primarily realist. Modi’s realism has two implications: increased reliance on coercive signalling, brinkmanship, and a willingness to deploy military action for projecting power, as well as a partial and incomplete shift toward external balancing. [1]The first can be witnesses in India’s changing relations with Pakistan. In response to terrorist attacks by the Pakistan-based militant group Jaish-e-Mohammed (JeM) on an Indian Army camp in Uri, Jammu and Kashmir (J&K), on September 18, 2016, Modi decided to break with his predecessors’ tradition of restraint and announced that India had carried out surgical strikes across the Line of Control (LOC). While such cross-border operations on terrorist launch pads have been frequent, India’s acknowledgement was a significant sign that it was willing to raise the stakes and impose consequences. India’s approach to foreign negotiations is shifting from one based solely on principles to one based on transactional trajectory[2](Chikermane). While principles continue to govern actions, India is no longer willing to use them as a cage. The doors have suddenly opened wide since Pulwama. Flying fighter planes into Pakistan is one example of political compulsions and posturing masquerading as strategic needs. However, it has set a new standard for India-Pakistan terror-military interactions, stating that if you send terrorists, we will send our military. India’s approach to the Quad and its balancing approach towards China is remarkable. While India has expressed support for the Quad in the aftermath of Sino-Indian border conflicts, External Affairs Minister S. Jaishankar has also reaffirmed India’s commitment to maintaining its strategic autonomy.

Economic sanctions on Chinese technology and goods, as well as the militarization of the border, demonstrate that Modi is not reluctant to the use of coercive measures. However, for the Quad to realize its military potential, other members may have to invest in India’s military (via technology sharing or aid) and economic capabilities (through FDI) to persuade New Delhi to share the cost of Asia’s broader security concerns.

Modi’s “Act East” policy of forging stronger relations with ASEAN countries has proven effective; his warm reception of foreign leaders in Gujarat and his visit to Israel demonstrate that India has matured and aspires to play a more prominent role in the world. India’s “Act East” policy has gained traction, and Modi’s efforts have lifted the cloud over India’s strategic and civilizational partners. Modi has cultivated relationships with allies worldwide while maintaining an uncompromising stance supporting Indian interests, ensuring that India has a powerful presence on the international stage.

While, Modi may be praised for his “bold stance” against China, but on the world stage, India has so far compromised its position. Modi’s misplaced arrogance compelled him to defy conventional wisdom and launch a charm offensive against Chinese President Xi Jinping. Despite the disintegrating Indian economy, Modi ignored the Doklam warning and continued to expect Xi to treat India equally. Meanwhile, through outreach to India’s neighbours and offers of economic and strategic cooperation, China had already started to limit New Delhi’s sphere of influence.

As far as QUAD is concerned, India is a minority party with little to give in terms of economic benefits. New Delhi will have to strengthen its strategic and military ties with other like-minded democracies. Still, the other Quad nations are unlikely to intervene if India and China engage in a full-scale confrontation. Unless India’s economy becomes more efficient and firmly integrated with the Quad, the country’s value to other partners will be constrained by its size and strategic location.