Cyprus: The Green Zone of Nicosia’s No Man’s Land 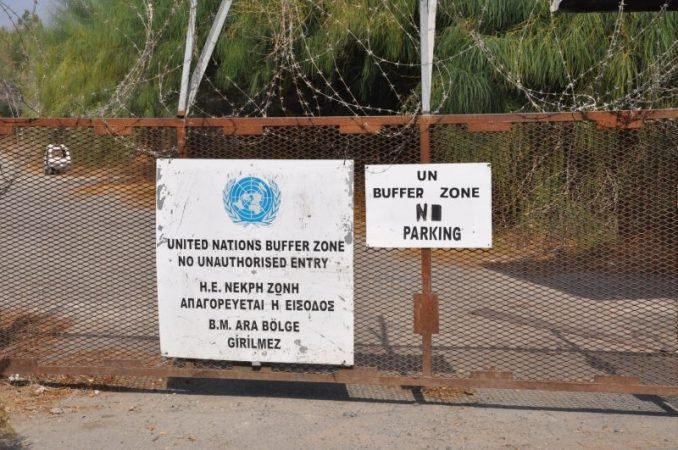 Tracing through the pages of history, Cyprus has been the melting pot of cultures at the crossroads of east and west. With surges of foreign subjugators, the Venetians, Ottomans and the Greeks, setting foot in the island, many of the world’s greatest civilizations have all left their stamps which exist till date. The disputed land has now grabbed the attention of a different type of visitor – the one who scribbles, scrapes the surface of the wounds of Cyprus’s recent past.

Cyprus gained independence in 1960, marking an end to 80 years of Imperial British colonization. The newly found republic land witnessed the power-sharing government of Turkish and the Greek Cypriots. However, as co-founders, it wasn’t very long before the union came crashing down as the seed of hatred, communism and division were already planted within the hearts of the people by the Britishers. Half a century ago, thousands of lives were claimed in bloody conflicts surpassing from two wars of 1963 and 1974. 1963, a full-fledged war broke out with both the communities at each other’s throat that left ordinary people as collateral damage, envisaged disappearance and mutilated only to be remembered as the aftermath of the doomsday. The right-wing Greek Cypriots looked for all possible unions with Greece which caused an escalated fear within the Turkish Cypriots community to emerge as a minority within their own homeland.

Tensions soon intensified, giving way to the bloodbath on Nicosia’s streets and lanes. Around 500 casualties with an influx of Turkish Cypriots’ deaths called for a truce to be signed in the Summer of 1964.  In Feb 1964, after receiving the first-hand sources laid down in the information report, under the direction of UN Secretary-General U Thant, the Security Council passed an authorized regulation of advanced units comprising 6500 UNPKF personnel to be positioned in Cyprus. A line was drawn through the heart of the city setting the two communities away from each other. This came to be known as the Green-line or the Green-zone. Post this agreement, the country testified long stretches of peace with sudden flares of unrest which dissolved within days.

1974: Turkish Invasion in Cyprus and the War

It was July of 1974, Cyprus descended into a full-fledged gory war after the disastrous well-orchestrated coup carried out by Greece to put an end to the Cypriot rule in June of the same year. Five days later Turkey sent in her troops under the pretext of protecting the Turkish Cypriots. The war ended with the Turkish military taking control over one-third of the island in the north. Before 1974, Cyprus was a travel hotspot with celebrities infatuated with bright blue waters and Sandy beaches of Varusha and In Famagusta.  Almost nobody could have predicted the death and destruction that was on the horizon. The war changed everything. With the sudden infiltration of Turkish troops in the north, towns and villages came under attack. Natives of Varusha and In Famagusta fled for their lives, leaving the fate of the former millionaire playground in the hands of the Turkish soldiers. By the time a ceasefire was agreed, Turkey had occupied the north.

To end the fighting a no man’s land was created. The green line now was redrawn, extending from Nicosia east and west for 189 kilometres across the full island. The country was further split, a buffer zone was established, a division was impregnated, cutting deep into the hearts of both separate communities. To the north of this zone, the Turkish Cypriots were given in-charge and to the south the Greek Cypriots. Nicosia remains the last divided capital of the world with a place of bristling tension.

It remains in place today, patrolled by the United Nations Peacekeeping Force (UNPKF). UN troops are stationed here under the authorization with and through the consent of both governing parties of north and south, in close co-operation aiming to maintain peace and stability within the region. These soldiers posted here are usually unarmed reflecting a symbol of trust on both sides in the conflict to honour and respect their position as peacekeepers in the buffer zone. The most sensitive part of the buffer zone is the old town of Nicosia, stretching 3 and half meters, demarcated with abandoned derelicts of family homes. As heartbreaking and dreadful incidents were, men, women and children from both sides suffered horrific atrocities of the wars. In 1981, through the allegiance of the United Nations, leaders of both communities came forward together to resolve one of the most painful aspects of the conflict – ‘to recover, identify and return’ to the families the remains of the missing.

What is the status of missing person in the conflict?

Psychologists have stated time and again the significance of the status of missing individuals in a conflict. Most of the time, these are people, who are executed, butchered, received a bullet at the back of their head and enforced disappearance, who hold a special status quo in the lives of their family members than who are living around. It affects the family so much so that they cannot cope, they are still stuck in the past. It creates a huge vacuum where they need some proof of death to dissolve the fact that their loved ones, who went missing are alive.

Stature of Post Cyprus Crisis in the Present Era

Secretary-General Antonio Guterres in hopes of spurring a return to negotiations to reunite the Mediterranean island nation discussed the issue. Numerous rounds of U.N. mediated talks have ended in failure. Tatar, who heads the Turkish Cypriot government recognized only by the nation of Turkey, said that Cypriots’ decision to continue the current status quo on the divided island is unrealistic. He believes that the island requires a two-state solution with comprehensive official negotiations that could only start after the Turkish Cypriot’s side is accepted as an international actor. On the other hand, Cyprus President Nicos Anastasiades told UN Member States that he is determined “to set the negotiation process” with Turkey “back on track”, on the basis of the UN framework and the agreement reached in 2019.

Role of India on Cyprus issue

In an official 5 days visit to India, Cypriot President Nicos Anastasiades had stressed the need for India’s support in the reunification process. Earlier in September, through an official statement issued by S. Jaishankar, Minister of External Affairs of India highlighted Turkey’s interests in retaining power in the northern disputed land of Cyprus after it has provided great national interests to Turkey.

Looking ahead in future

To keep the warring factions apart the dead zone still remains intact to this day, dissecting this small island in two. Time is running out to reunite a land where Greek and Turkish Cypriots once lived together in harmony. The guns may have been silent for decades but the divisions have cut deep wounds not only across the island but within the hearts of her people. Keeping all the possibilities in hand, education, and education only can be the first step for peace restoration in the region where people respect each-others culture, language, traditions and ethnicity.