Who is Kim Yo Jong? Know North Korea’s Most Powerful Lady 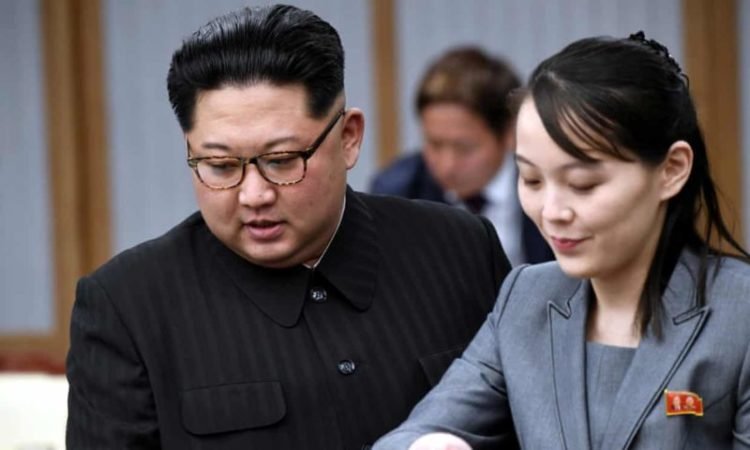 Kim Yo-jong with her brother at a meeting with Moon Jae-in in the demilitarised zone in 2018. Photograph: Reuters
PDF Button

It was the Winter Olympics of 2018 when the world formally knew about North Korean Supreme Leader Kim Jong Un’s sister Kim Yo Jong. The world’s press was flooded with the stories of the most powerful female figure of North Korea. The debutante—slender, smiling, gracious—seemed to be opposite from her hoggish brother.

But now as Supreme Leader’s health is in question, and amid conflicting reports by the world media that he could be at death’s door, the younger sister may well be first in line to carry on the family dynasty.

Kim Yo-jong’s birthdate listed as September 26, 1987. She spent her early years at her mother’s Ch’angkwang Hill residence in central Pyongyang with her two older brothers. According to family chef Kenji Fujimoto, the family would celebrate her birthdays at another home in Wonsan.

Yo Jong’s journey to the heart of the North Korean regime had arguably begun in the late 1990s when she attended primary school in Berne, Switzerland at the same time as Kim Jong-un, with whom she lived in a private home, attended to by staff and watched over by bodyguards, according to North Korea Leadership Watch.

“They were virtually in exile together, both knowing what the future had in store for them,” Bong said. “They must have gained a tremendous sense of having a common fate. As a result, she has her brother’s unconditional trust.”

Little is known about Kim Yo-jong’s life during the period between her graduation with a computer science degree from Kim Il-sung University in Pyongyang and 2007 when she began to play a junior role in the ruling party.

She is said to have been involved in arranging her brother’s succession as supreme leader after Kim Jong-il suffered two strokes in 2008 but was not mentioned by North Korean state media until March 2014, when she accompanied her brother during elections for the Supreme People’s Assembly.

Last month, she made her first public statement, condemning the South as a “frightened dog barking” after Seoul protested against a live-fire military exercise by the North. And in March, she publicly praised Donald Trump for sending Kim a letter in which he said he hoped to maintain good bilateral relations and offered help in dealing with the coronavirus pandemic.

A lady Supreme Leader in Making?

The North Korean regime is a family business, and Kim Jong-un appears to place trust in his sister. She has demonstrated skills at modernising the brand of the regime and has some sway over state propaganda. Her most important function is probably as a confidante to her brother.

Kim Yo-jong’s upward trajectory is expected to continue once the North resumes its nuclear diplomacy in a post-pandemic world. She plays a pivotal role in North Korean domestic and foreign policy campaigns because she is one of the main stakeholders in the regime’s survival.

For her leadership role in the Propaganda and Agitation Department, Kim was among the seven North Koreans sanctioned by the U.S. Treasury in early 2017 for “serious human rights abuses and censorship activities.” She is also rumoured to be involved with the shadowy Office 39, tasked with raising funds for the Supreme Leader.

According to experts, it may be impossible for a 32-year-old woman to take control of a country run by an elite group of powerful old men. However, a considerable size of opinions pours in favour of her believing she is the natural successor to Kim and that her recent high-profile public engagements show she is being groomed to take control.

According to Leonid Petrov, a North Korea expert “North Korea is a Confucian country where seniority and masculinity are respected. Kim Yo Jong is the most trusted ally of Kim Jong Un, but no more than that”

Petrov points out that in the case that her brother dies, Yo Jong could be in danger from those who seek to take control, a similar fate suffered by the wife of China’s powerful leader Mao Zedong who held a huge among of power before he died.

“If Kim Jong Un is dead or incapacitated, Kim Yo Jong is likely to repeat the fate of Jiang Qing, also known as Madame Mao, who was imprisoned soon after Mao’s death for her alleged ‘anti-party activities.’”