Rajnath Singh leaves for Dushanbe to attend SCO Defence Minister Meet: What to look forward to? 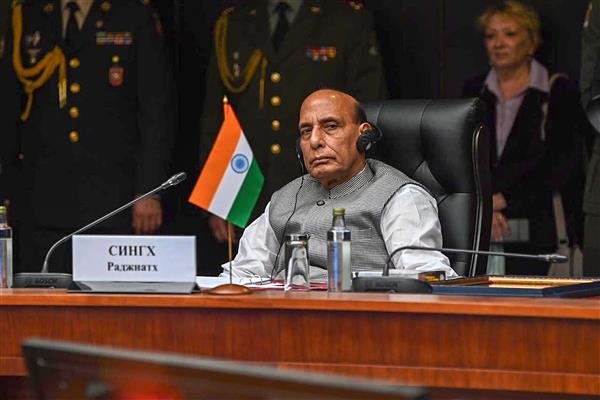 The SCO Defence Minister meet puts India’s in a very significant yet unstable position, given that bilateral talks between Rajnath Singh and his Chinese counterpart General Wei Fenghe are being assumed. The second reason which has surfaced in the geopolitics of Central and South Asia is the turmoil in Afghanistan. US Secretary of Foreign Affairs Antony Blinken is also in India to hold bilateral talks with the Indian government, and the agenda which tops the list of bilateral engagement is the rising tensions between the Afghan government and the Taliban. However, the visit of the Indian Defence Minister Rajnath Singh amidst all this amplifies the relation between India and other stakeholders in SCO.

Speaking briefly of the unsettling border dispute between India and China, and the latter’s attempt to ‘unilaterally’ change the status quo has been at odds for the perusal of India’s foreign policies vis-à-vis its neighbours. Despite the several attempts made for disengagement and withdrawal of troops from the Pangong Tsao region, China has been at attack with India denying any allegations of entering into Indian territory. Although no mention of any bilateral engagement between the two has been mentioned, however, the assumptions are being run given the small engagement between EAM Jaishankar and his Chinese counterpart during the SCO Foreign Ministers’ Meet earlier this month. But the question of Afghanistan has already set a very disconcerting atmosphere for this SCO meet’s procedure.

It is indeed ironic that the US’s Afghan Peace Process was about the restoration of normalcy within Afghanistan. The withdrawal of the US troops which again was a heavily debated issue within the bounds of academia hasn’t quite achieved what it had promised to deliver. The situation with the Taliban in Afghanistan is growing out of bounds now. The SCO meet at this juncture can be at least used to devise a roadmap to understand and assist the country to restore normalcy. However, without Afghanistan’s full membership in the SCO, it is quite arduous to expect anything grand in favour of the country. The Plan of Practical Measures to Promote Socioeconomic Restoration in Afghanistan has not much has been achieved out of it. SCO aims at tackling terrorism and extremism within Central Asia and South Asia can prove to be a good catalyst of change for Afghanistan’s situation and India being one of the closest neighbours can equally decide the fate for the country. The geopolitical situation for India is one of turbulence as it is dealing with two aggressive border disputes with Pakistan and China, and any change in Afghanistan or its government will have a direct impact on India’s foreign policy as well.

As updates from this meet remain anticipated, it would be stimulating and interesting enough to witness the conclusions that will be drawn at the end of the Defence Minister Meet in Dushanbe.