Will India be the ‘Immediate Vanguard’ against China? 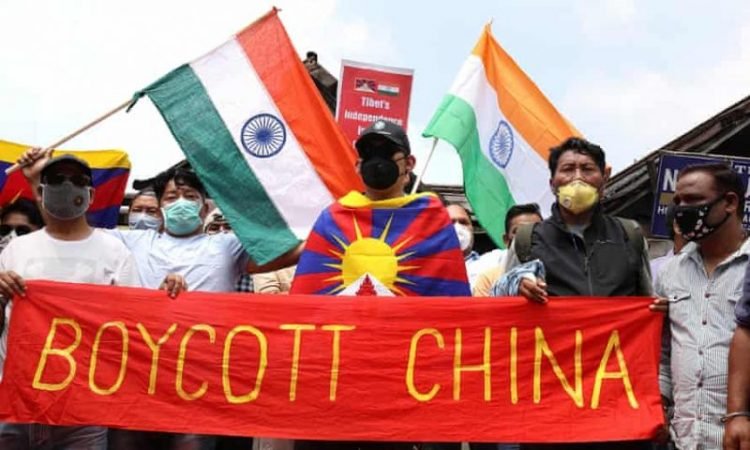 Quad nations expressed their commitment to an open, free, and rules-based Indo-Pacific through a joint vision statement issued after their first-ever Summit in March. The very next day, Chinese Foreign Ministry spokesperson Zhao Lijian, while answering to a question on Quad Summit, called on certain countries, not to hype “China threat” but rather give up their “Cold War mentality. He said, “Certain countries should shake off their Cold-War mentality and ideological prejudice, refrain from forming closed and exclusive small circles, and do more things that are conducive to solidarity and cooperation among regional countries and regional peace and stability”. In an annual press conference few days before the summit, Chinese Foreign Minister Wang Yi had condemned certain countries for “building small circles in the name of multilateralism (which) is in fact ‘group politics’”. A more assertive reply came from the party’s high command when he advocated for safeguarding the UN-centred international system. Chinese President Xi Jinping, delivering the keynote address at the annual Boao forum, often touted as Asia’s Davos, said, “We must not let the rules set by one or a few countries be imposed on others, or allow unilateralism pursued by certain countries to set the pace for the whole world.” Xi’s remarks should be seen in the light of his speech at World Economic Forum at Davos in January, in which he championed multilateralism and criticized “small circles”, a covert reference to Quad.

There has been a substantial shift in Beijing’s views on Quad 2.0 over the years. In 2017, Chinese Foreign Minister Wang Yi had laughed off the revival of Quadrilateral Security Dialogue by saying that it was a “headline-grabbing” idea that will “dissipate like seafoam in the Indian or Pacific Ocean”. Three years later, he slammed the US for trying to build an “Indo-Pacific NATO”, underpinned by the same Quad. However, the recent pro-active exchanges among Australia, India, Japan, and US have made a declaration that “Quad is here to stay”, says Tanvi Madan, a senior fellow at Brookings Institution.

Will India become a pawn in “Asian NATO”?

India has a clear stance claiming not to confuse the Quad with the Asian NATO or anti-China coalition. Speaking at India Economic Conclave, Indian Army Chief Gen MM Naravane said, “Quad will be a military cooperation, not a military alliance”. External Affairs Minister S. Jaishankar, too, said that the Indo-Pacific strategic construct is not about reinforcing the Cold War era but “overcome” it. As the world is changing, India is now also forming coalitions with other like-minded countries with which it can “work together” and it is so because multilateralism “is not delivering the way it used to”, he said at the Raisina Dialogue.

Although the partners of US in Quad never claimed the group to be an anti-China front line as stated by Chinese scholars, US under the Trump regime was vocal about Quad’s role in “putting China in its proper place”. Biden administration has signaled that Indo-Pacific will remain their priority and India will be the central pillar in their approach. If the Quad is all about India, then India’s participation in it is all about China. US has linked the Sino-Indian border conflict with a broader pattern of Chinese expansionism and uses it as leverage for nudging India toward greater cooperation with ‘like-minded’ democracies of the Indo-Pacific region. Australia and Japan are already military allies of US. However, India’s strategic autonomy doctrine remains the key challenge to the evolution of Quad into a formal military alliance. All said, US seems keen to pitch the ‘largest democracy’ against the ‘strong authoritarian’ in its quest to have an upper hand in the Indo-Pacific region, while India remains non-committal.

Is China anxious about India joining the US in the ‘Contain China’ Game?

Strengthening of India-US ties and enhanced cooperation between Quad nations has caused some anxiety in China. Although Beijing has been downplaying the significance of Quad, Chinese media and academia have mulled too much on this topic, especially on the role of India in Quad, most of them coming up with admonitions. There is a unanimous view in China that US wants India to play a pawn in the former’s plan to besiege China, and India should not fall into the trap but rather handle its differences with China separately. As the Quad approaches the intended institutionalization, China is closely watching the steps of India and anticipating how far will India go to fulfill Quad’s goals.

Hu Xijin, Editor-in-chief of China’s global mouthpiece Global Times, quite straightforward in his views said, “US wants to encourage India to engage in more conflicts with China and treat India as a cheap pawn to control China and serve US interests. If India does not handle its relationship with China properly, it will be useless to develop any kind of alliances.”

In an interview at China Forum, Zhou Bo, senior researcher at Centre for Strategic and Security Studies in Tsinghua University, said that the so-called “Mini Eastern NATO” is not necessarily against China, but it is about China, for sure. Amidst the Sino-US great power rivalry, US is focusing on rallying its allies against China. India is not an ally, yet it is very important. So, US wants to rope India into its league. However, India won’t give in easily, owing to its policy of non-alignment. As the saying goes, you can choose your friends but not your neighbors. India will not want to put Sion-Indian ties at stake. There are no rewards for India to go into a head-on with a mightier neighbor, at the behest of a far-away non-ally great power.

Another scholar Pan Guang, head of the Centre of Shanghai Cooperation Organization Studies in Shanghai Academy of Social Sciences, outrightly rejects the possibility of Quad developing into any sort of Asian NATO with India being the weak link. He told the Observer Network that India has been the pioneer of Non-alignment, so it is unlikely to join a military alliance. The popular opinion in India to garner support by deepening ties with US amidst the clashes at the Sino-Indian border has dwindled, after the disengagement of troops on the site. He further says that souring relations will do India no good, given its domestic challenges such as economic slowdown, farmers’ protest, etc. Another reason is Indo-Russian relations. India’s serious commitment towards forming a military alliance might irk Russia.

Qian Feng, director of the research department at the National Strategy Institute at Tsinghua University told Global Times that warming bilateral ties doesn’t mean that US will go easy on India. Biden administration might consider using India as a pawn to contain China under Indo-Pacific Strategy while criticizing India’s streaky record on race, human rights, and religion.

How far will India go to fulfill its Quad goals?

In the wake of the military standoff at Ladakh on the Sino-Indian border in 2020, the debate on hitching India’s wagon to US heated up. Many commentators argued that New Delhi should cooperate more vigorously and openly with Washington to deal with increasing assertiveness in the neighborhood. Some observers from defense, diplomatic, and scholarly circles agreed that India is being too hesitant to leverage opportunities in strategic partnerships at the time of crises.

Following the bloody skirmishes at the Sino-Indian border last summer, US Secretary of State Mike Pompeo had proclaimed that India needs US as an ally. However, experts doubt the efficacy of such support in a realpolitik scenario. It is too risky for India to up the ante against China in the hope that the US will back it, as US is hardly in a position to do anything substantial to help India, said KS Dakshina Murthy, Editor-in-chief of news website The Federal. Even if Quad wants to intervene in favor of India, Japan and Australia are logistically too far away and, secondly, they share strong functional ties with China even if they are not too friendly with Beijing. This loose military cooperation will not be able to deter China.

However, there are more questions than answers regarding the future course of action as India tries to balance its increasing tangible cooperation with the Quad nations and its age-old reservations about a formalized security structure. It remains to be seen what position does India, an aspiring great power country, takes in the Sino-US great power rivalry, but it is foreseeable that the US-India defense relations will continue to grow.

Japneet Kaur is a MA student at CCSEAS, Jawaharlal Nehru University, New Delhi. She holds a graduate degree in Commerce, University of Delhi, and a post-graduate degree in Advanced Intermediate Diploma in the Chinese language from the Department of East Asian Studies, University of Delhi || Saranya is pursuing her Master's in the Chinese language at Jawaharlal Nehru University. She sees language as an indispensable tool to study China’s domestic policy, its role in the neighbourhood and world stage.