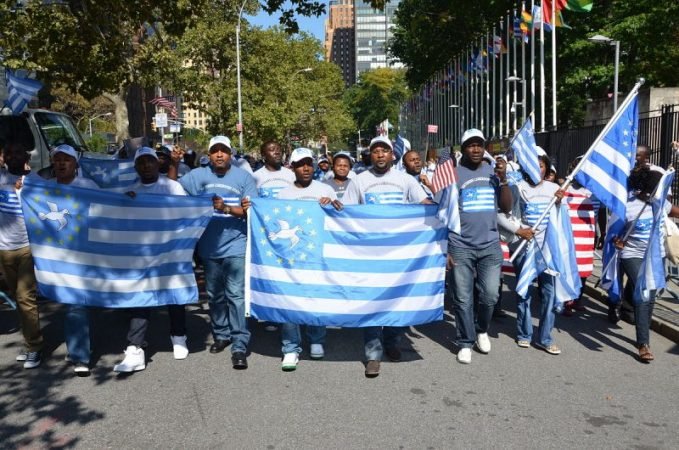 An insight into the Anglophone and Francophone fault line in Cameroon.

Charles Tilly’s famous adage ‘state made wars and war made states’ has been time and again rippling into the 21st century’s narrative of the state making or breaking. Though wars of the 19th century and Tilly’s aphorism don’t fit well in the African domain, as the coercion and capacity building created successful nation-states in Europe whereas in the connotation of Africa states tend to expand and contract their borders or create and collapse in the protracting civil wars. The nature of war differs and the agency and the motivation to fight them differ too, but the achievable outcome stays the same, that is the state for a repressed national identity.

The post-colonial states in Asia and Africa in the passage of time gave in and ruptured out of their existing state boundaries, recent is South Sudan seceding from Sudan. A coherent state configuration doesn’t homogenize its pluralistic elements but creates conducive conditions to co-exist through equitable distribution of rights. Until this realization is missing, newer states would continue to sprout in Africa.

Ambazonia: bringing the unknown to the forefront.

The Republic of Ambazonia or the ‘land of the Ambas people’ is the self-proclaimed state of the Anglophones living in the ‘northwest’ and ‘southwest’ territories of the ‘La Republique du Cameroun’. The region with its demand for self-determination declared its independence from mainland Cameroon on 1st October 2017 and since then has been administered by an interim government run by an elective body. Almost every existing country in Africa has exchanged fates with many colonial powers till they finally achieved independence. Colonialism can exist in many ways possible, perhaps that is why Nkrumah coined the term neo-colonialism to warn against the hidden threats of aid. Now, a new peril looms large coming out of the same frame and that is ‘Black on Black’ colonialism.

The politico-administrative and ethnocultural zeitgeist of Cameroon is a mix of more than  280 native languages spoken by more than 20 million people, who are culturally diverse and practice different religions. Then why fault lines between the Anglophone and Francophone Cameroon run deepest? The answer lies in the fabric of time that juxtaposed two different colonial experiments together. In the year 1961 when via referendum British Southern Cameroon chose to leave Nigeria and join French Cameroon (the claim which Ambazonia nationalists outrightly deny) hoping to exist as equal citizens. In Cameroon,  80% of the population is French and the remaining 20% is Anglo-Saxon (English), who have exclusive functional domains aligned with languages they speak. So, if the boundaries are so clear then why is there a clash?

The conflict of the present emanated from the past.

The overt form of the Anglophone nationalistic conflict came out in 2016 when lawyers, teachers, and students of Anglophone origin took to the streets demonstrating against the French capture of the English exclusive posts in courts and schools. The federal constitution of Cameroon which was adopted at the Foumban Conference in 1961 set out the provisions that allowed the administration of two populations as per their historic laws. The legal system in French Cameroon is based on the ‘French Civil Law’ and British Cameroon practices ‘British Common law’. It was the appointment of French-trained judges in the Anglophone courts and the administration of French-educated teachers in the Anglophone schools that triggered the protest. This ephemeral breakout wasn’t just the result of a few overlapping thresholds, but decades of marginalization and the concretization of the ‘Us vs Them’ divide.

For every strand of realism, nation-states are the primary actor in the international system. The 1933 Montevideo conference laid down the cardinal points for a state to exist and function both internationally and domestically. Ambazonia has a demarcated territory, a significant population (which identifies to it), a government still in the building stage but does it have the agency to enter into relations with other states? The call of self-determination is from whom?

The British Southern colony had had an internationally recognized status before it joined French Cameroon. Its historical trajectory can be seen in the following bullets:

Every nationalistic literature has a partisan tone, a standard Ambazonia reader will claim its statehood since 1st October 1961, but the truth remains it is a date of perceived independence and not a real one. The UN Resolution 1514 (XV), a declaration of decolonization that grants independence to colonial countries and people, this is a paradoxical historic folly of imposition of the external decision on distressed people by the same organization.

How Cameroon is exactly at fault? The cultural and actual boundaries in Cameroon don’t coincide. Nationalism in the 21st century is beyond a football game, Anyhony Smith’s primordial concept of ‘ethnie’ is a time transcending positioning of a nationalistic belonging. The idea of Ambazonia also lies in the extremes of history that go as far back as 500 BC when Hanno the Navigator discovered the Ambas Bay. The answers of the present dejection are often sorted in the past and maybe in the recent past. French Cameroun colonist mindset has compelled it to adopt a stringent unitary setup diluting its federal undertone as promised by the Foumban constitution which was abrogated in 1972 by President Ahmadou Ahidjou. In 1984, Ahidjou’s successor President Paul Biya in a presidential decree completely shed off the duality of Cameroon by changing its name from ‘Unitary Republic of Cameroon’ to ‘Republic of Cameroon’. These symbolic acts of deprivation are always carried out by exclusionary policies on the ground, which ultimately led the Anglophone community to come out on roads tearing the mist of denial by the Cameroon state.

The Road Ahead! Cameroon’s Collapse or Amabazonia’s submission.

The prism of conflict, in this case, is asymmetric where warring factions have inequitable structural strengths.  Amabazonia since 2016 protests are defended by many separatist groups spearheaded by Ambazonia Defence Forces (ADF), famously known as ‘the boys’. On the other hand, Cameroon’s state Army is using shrewd military tactics against the guerilla warfare of these militias. There is always a thin line between a protector and a perpetrator, those who are waging the war (Ambazonia Separatists) against the perennial perpetrators (Cameroon state) change hats many times in the day. To sanction their acts they funnel out the funds from the Anglophone diaspora or try abducting teachers and students by occupying schools (World Report, 2020).

Owing to the crisis, the Anglophone population is becoming ‘internally displaced’ in their own land or escaping the situation by moving to neighbor Nigeria. These tumultuous situations along with Boko Haram’s presence in the north are increasing the fragile status of Cameroon as per many indices, I have selected Fund For Peace (FFP) Fragile State Index to support the claim of shredding Cameroon’s coherence.

The glance into the future can be seen through many lenses. Does Ambazonia stand the chance to become the newest country in Africa?

Anyangwe, Carlson (2008) Imperialistic Politics in Cameroun: Resistance & the Inception of the Restoration of the Statehood of Southern Cameroon, Bamenda: Lagaa Research and Publishing CIG.

Anyangwe, Carlson (2010) “The Secrets of an Aborted Decolonisation: The Declassified British Secret Files on the Southern Cameroons, Bamenda: Lagaa Research and Publishing CIG.

B. Anderson (1983), Imagined Communities: Reflections on the Origins and Spread of Nationalism, London: Verso.

Tyler, Mark (2017), A Comprehensive History of Ambazonia from its Discovery to Independence to Contemporary Issues, Independently Published.

Anum Khan is a junior research scholar and a final year M.Phil student at the Department of African Studies, University of Delhi.