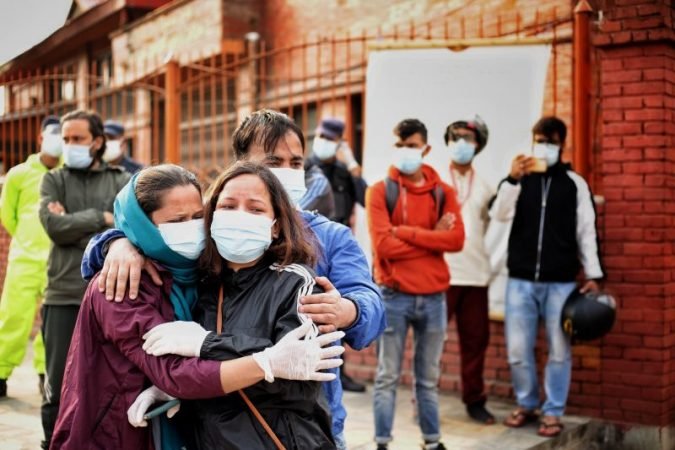 The tiny Himalayan nation has almost reached its breaking point, with the healthcare system falling apart due to the sudden surge of COVID-19 cases. Nepal that was recording 100 cases a day in April has now seen a record high of about 8,000 COVID infections per day.

According to the International Federation of Red Cross and Red Crescent Societies, the situation is an impending crisis with the country reporting 20 cases per day per 100,000 people, a number that is similar to the Indian rate from the past week. At the current rate of virus spread along with shortage of vaccines, the Nepalese government is losing control of the situation with their fragile infrastructure.  Last week, Nepal reported a daily increase of 8,777 infections, 30 times the number recorded on April 9.

The nation has just 0.7 physicians per 100,000 people, according to World Bank data, less than India’s 0.9. The devastating second wave has resulted in even the most capable of private hospitals in the country to refuse admission to severe covid infected patients. There is a shortage of hospital beds all over the country, along with a shortfall of oxygen supplies. There are only 1,600 intensive care beds and fewer than 600 ventilators for its population of 30 million.

The condition has worsened to a point where the government is asking the Mount Everest climbers to return their oxygen canisters that can be refilled and used for covid relief. These oxygen tanks are usually disposed of or abandoned on mountain slopes during the expeditions. The climbers and their Sherpa guides are estimated to have carried at least 3,500 oxygen tanks this season. Kul Bahadur Gurung, a senior official with the Nepal Mountaineering Association

has been quoted saying, “We appeal to climbers and sherpas to bring back their empty bottles wherever possible as they can be refilled and used for the treatment of the coronavirus patients who are in dire needs,”

The current crisis is speculated to have been caused by the relaxation in lockdowns along with nationwide festivities taking place earlier this year. People were seen to move around in public places without masks and attend large religious gatherings without any social distancing measures. The government was also slow to take action against curbing the spread. The Prime Minister of Nepal, KP Oli was in fact quoted saying that the remedy to covid is gargling with guava leaves, which has no scientific verification whatsoever.

Nepalese migrants have also returned from India due to the second wave in the country. With easy mobility across both borders, the migrants seem to have carried the new strain before the border restrictions  were imposed. Nepalgunj in particular, a cross-border point near Uttar Pradesh, India has seen a high surge of covid cases in the country. These workers usually belong to the rural, mountainous parts, where there is already a dearth of medical facilities. This is also one of the main reasons for the high death rate in remote parts of Nepal.

The much criticized Kumbh Mela gathering in Uttar Pradesh that exacerbated the infection rate in India also saw Nepalese visitors. The former royals King Gyanendra Shah and Queen Komal Shah were reported positive after their return from the same event. Around the same time, another religious festival ‘Pahan Charhe’ took place in the capital city of Kathmandu that saw thousands of attendees, despite authorities ordering them not to.

The government imposed a two-week long lockdown on April 29, but it was too late then. The Oli administration also authorized climbing permits to more than 700 climbers for 16 Himalayan peaks – 408 to Mount Everest amidst the sweeping second wave, a decision that is now highly criticized by experts.

Nepal is currently seeking immediate international aid after facing tremendous pressure on domestic resources. The Health Ministry has put out an urgent call for supplies — including oxygen generation plants, ventilators, and 37 million doses of vaccines. Most countries are battling their own pandemic war which might delay the response to the call. However, the Nepalis are hopeful about receiving help from the United States after the Biden Administration has pledged covid relief to developing and underdeveloped countries in the world.