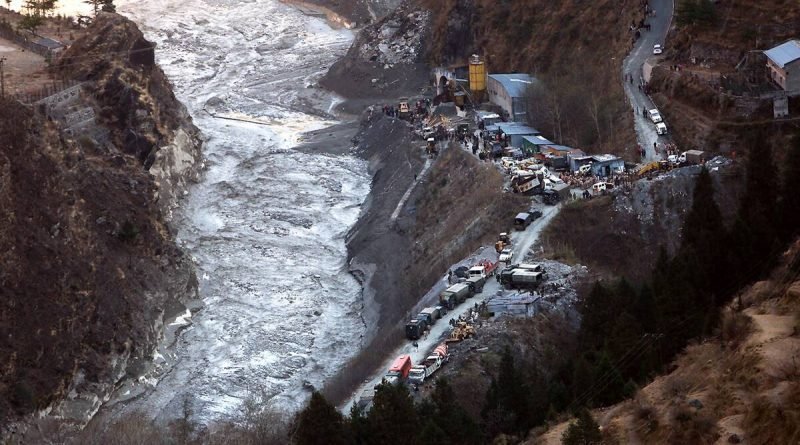 A ‘glacier burst’ was reported in the Chamoli district in Uttarakhand on 7th February 2021. The so-called glacier burst has so far claimed 18 lives with nearly 200 people missing. The massive outburst had led to a rise in water levels in ‘Rishiganga river’, washing away two hydel projects. Satellite images of the broken Rishiganga Dam project surfaced up on the internet. The dam is reported to be destroyed by the flash floods. As an outcome of this massive burst, flash floods have affected river Alaknanda, displacing lives of hundreds. However, the death toll figure is fluctuating and the total number cannot be acclaimed as of now. The startling incident has left a wake-up call for politicians and environmentalists, questioning the pace of development in the area and are we striding towards the road of development compromising on the environment.

The Geological Survey of India reported that to call the incident an ‘avalanche’ would be incorrect at this moment, but the word which fits the horrifying incident in Uttarakhand is a ‘glacier calving’. This phenomenon occurs when the when a large chunk of ice breaks away from a glacier or iceberg. In this case, a large chunk of the Nanda Devi glacier led to the mishap. The GSI is looking into the matter as the glacier burst remains to be parallelly similar to the Uttarakhand flash flood in 2013. The Chief of GSI, Dinesh Gupta stated, “Post this devastation, we’ll again constitute a committee as it’s too early to predict regarding the cause of the incident. Prima facie, it’s glacial calving at the highest altitude in Rishiganga and Dhauliganga area and the upper reaches.” The whereabouts of the Uttarakhand incident will require further study and research, but what has happened cannot be undone and it has drawn international attention from leaders across the globe.

United Nations Secretary-General Antonio Guterres and United Nations General Assembly President Volkan Bozkir have extended to assist Uttarakhand in the crisis. Spokesperson of the Secretary-General tweeted, “The Secretary-General is deeply saddened by the reported loss of life and dozens missing following the glacier burst and subsequent flooding in Uttarakhand state, India, on Sunday. The Secretary-General expresses his deep condolences to the families of the victims, the people and Government of India. The United Nations stands ready to contribute to ongoing rescue and assistance efforts if necessary.”  Apart from the United Nations, India’s closest allies and foes have too extended their condolences to families of the bereaved and those who are still missing. Afghanistan, the United States, France, Maldives, Bhutan, Pakistan, China and Turkey have reacted to the Sunday incident. French President Emmanuel Macron was the first head of state to have reacted the Uttarakhand issue. He tweeted, “France expresses its full solidarity with India, after a glacier burst in the Uttarakhand province, leading to the disappearance of over 100 people. Our thoughts are with them and their families.”

Apart from the international commentators, Indian politicians and administrators were left startled and flustered by the unfortunate incident in Uttarakhand. The Prime Minister who had visited Assam on the same day as part of campaigning for the upcoming elections. He took to his Twitter account immediately amidst his visit and tweeted, “Am constantly monitoring the unfortunate situation in Uttarakhand. India stands with Uttarakhand and the nation prays for everyone’s safety there. Have been continuously speaking to senior authorities and getting updates on NDRF deployment, rescue work and relief operations.” Uttarakhand Chief Minister Trivendra Singh Rawat has been consistently monitoring the situation and has conducted an ariel survey of the affected areas, himself. The latest update received from the Uttarakhand Chief Minister mentioned about the joint team of National Disaster Response Force (NDRF), State Disaster Relief Force (SDRF) and the Indian Army conducting a rescue operation inside the Tapovan tunnel. Ration and safety kits have been distributed to the victims of the flash floods, but the rescue operation continues.

The perils of such a natural calamity are humungous and the damage to the ecosystem, uncountable. But these disasters are a reminder of climate change and the price that is paid because of rapid development in areas which are fragile and already prone to natural calamities. The glacier burst or calving is not man-made, but climate change is and the responsibility lies on the shoulders of politicians and administrators on how climate change can be dealt with. Very often, its witnessed and heard that our leaders mention of ‘sustainable development’ but the reality presents a different picture whereby ‘sustainable’ is completely out of frame. The destruction of the Rishiganga Dam is an indication that development is fragile grounds around sturdy mountain ranges require planning and proper execution, for when calamities as such happen it is the normal bystanders who become the outright victim of it.

Glaciologists have so far presented that the mishap cannot be ruled out on basis of constructions of dams and other hydel projects, but climate change as a factor cannot be ignored. The possibilities of a glacial lake present in that area are not known to the locals as well as scientists studying the area. But this raise concerns on the topography change and how it could affect the ecosystem in these areas. The Wadia Group of Himalayan Geology will be sending a team of scientists to study the sudden outburst, as stated by their Director, Kalachand Sain. Another group of experts have claimed that this Glacial Lake Outburst Flood (GLOF) is not “unusual” but it is imperative to find what triggered the event and future possibilities of such incidents. Hence, it is significant to adhere to the ideas of climate change, green economy and sustainable development are knocking at our doors, but we still fall short to open that door and address issues pertinent in and around those geographical areas and the country at large.

The ill-fated episode in Uttarakhand must serve as a wake-up call to address issues on climate change and national disasters. Meantime, the success of rescue operations and relief measures is hoped for.