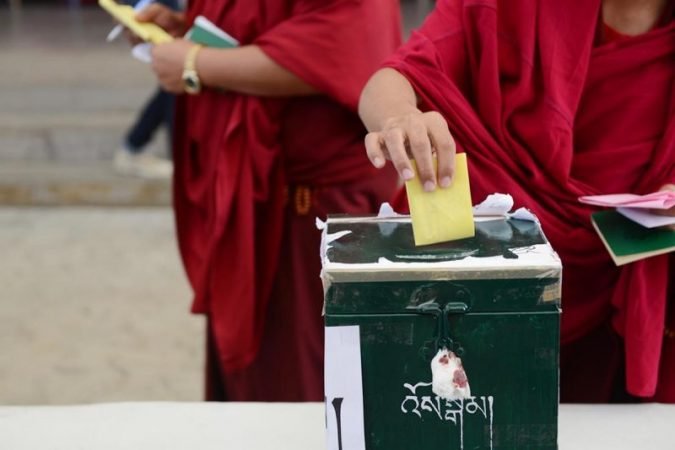 One of the most important ways that the exiled people from Tibet continue to express their freedom is by taking part in elections.

This is vital when it comes to deciding who should be represented in the government-in-exile, based in Dharamshala, northern India.

Eligible Tibetan voters living in the diaspora, mostly in India but also spread across the globe, cast their votes in the first phase of election held in January 2021.

Contrast this to the dire situation inside Tibet, where the repressive Chinese government denies even basic rights to the people who live there, including the right to cast their votes in free and fair elections.

From Japan to Australia, New Delhi to New York, Europe to Africa, more than 60,000 Tibetans participated in the democratic election process, which is held once every five years.

The Tibetan Election Commission, based in Dharamshala, today announced the official results of the first phase of elections. Mr Penpa Tsering, former Speaker of the Tibetan Parliament-in-exile, who secured about 40% of the votes cast and Mr Kalsang Dorjee Aukatsang, former Representative of His Holiness the Dalai Lama for the Americas, who secured about 24% of the votes, are thus confirmed as the the top two  candidates. Both of them will now be contesting in the next phase of election to be elected as the next Sikyong, i.e., political leader of the Tibetan people. The remaining share of the votes went to five other candidates who were in the race.

The second and final phase of the election is scheduled to be held on 11th April 2021 with the declaration of final election results scheduled for 14th May, when the next Sikyong will be revealed.

The election is particularly important because the Sikyong represents the Tibetan freedom campaign.

For many years, this role has been fulfilled with great humility by His Holiness the 14th Dalai Lama. However at the age of 85 he is no longer able to travel as frequently as he used to in the past. As a result media coverage for the Tibet issue has declined comparatively.

The current Sikyong, Dr Lobsang Sangay, will be completing his second five-year term in May 2021. He cannot stand for a straight third term.

It will be a challenge for the next Sikyong to keep the Tibet issue relevant on the world stage already crowded with pressing issues such as tackling the Covid pandemic and global climate challenge to name a few.

However, international attention is focussed on China and the way it treats its citizens, including ethnic minorities.

China has also incarcerated more than a million Uyghurs. The Trump Administration termed this as ‘genocide’.

Likewise, the sentiment in India in the aftermath of China’s aggressive moves along the India-Tibet Himalayan border has soured towards the Chinese government.

Taking this into consideration, the Tibet movement will seek opportunities to work together with like-minded stakeholders to bring about policy changes favorable towards resolution of the Tibet issue.

The Tibetan election, which was held successfully despite Covid-19 restrictions the world over, proves that for the exiled diaspora, the democratic system is robust and lively.

Tenzin Kunga is a London-based freelance researcher focussing on UK-Tibet-China geopolitics. He is the Research Assistant to the Editor of Asian Affairs. Born and raised in India, he also speaks fluent Hindi, Tamil and Kannada.