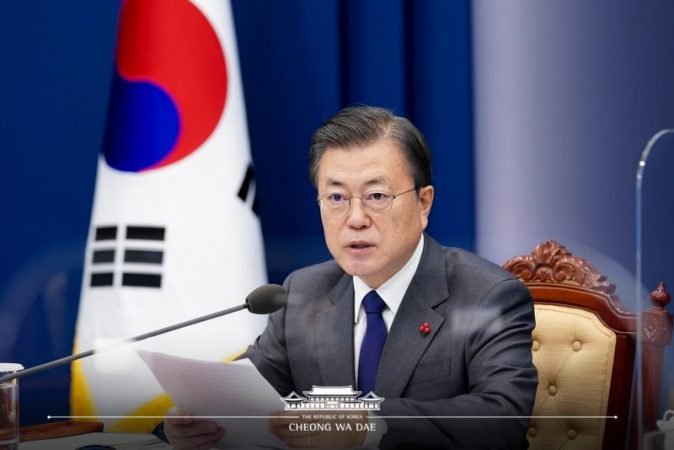 This year’s conference of the World Economic Forum is taking place online instead of in Davos, Switzerland. It has nevertheless attracted many of the world’s leaders, including South Korea’s president, Moon Jae-In.

Duncan Bartlett offers an analysis of some of Mr Moon’s key points.

Mr Moon said inequality was worsening, not only within countries but also between nations, as a result of the pandemic. He outlined his plan to press businesses in his country, which are prospering at present, to share their profits with those less fortunate. He said this could be a model for the world to follow.

Quote: “More wisdom will be needed to work out the details, but if these initiatives can be realised they can become a benchmark for inclusive policies to be used in overcoming future pandemics together.”

Analysis: This remark shows that Mr Moon takes a left wing political approach towards addressing domestic problems in South Korea. Social inequality was highlighted in the Oscar-winning film “Parasite” which emphasised the cramped living conditions of city dwellers. Mr Moon’s efforts to solve the problem through housing reforms has achieved only limited success. People with safe jobs in big companies like Samsung and Hyundai or the government often enjoy a high standard of living. However, self-employed people, retired people and students often struggle. Forcing big companies to redistribute some of their wealth fits with Mr Moon’s progressive agenda. However, the initiative faces strong protests from the right wing political opposition, which calls it a “socialist” measure.

President Moon Jae-in said that South Korea’s economy will recover to its pre-pandemic state in the first half of this year and will then achieve the highest growth in the OECD. He outlined policies to stimulate and uplift the economy, as well as creating jobs and expanding the social safety net.

Quote: “Through the New Deal for Balanced Regional Growth, the local economy will flourish and people’s lives will improve in a balanced way.”

Analysis: Mr Moon has been pushing for greater investment in technology, linked to a plan to reduce emissions and combat climate change. He calls this the Digital New Deal and the Green New Deal. It is quite possible that South Korea’s overall GDP growth rate could rebound to 3 percent in 2021. However, this is not primarily as a result of the New Deal, which is still in its early stages. South Korea has been fortunate because its covid infection rate has been relatively low. If the government keeps its promise to inoculate the entire population this year, life could return to normal much more quickly than in other parts of the world.

Mr Moon did not talk about foreign policy during his 15 minute speech at the World Economic Forum. However, during a news conference on January 18th, he said he intends to make North Korea his foreign policy priority.

Quote: “We’re focusing our diplomatic energy toward a quick resumption of dialogue between the U.S. and North Korea.” A source in the South’s Foreign Ministry, quoted by the Nikkei Asian Review.

Analysis: President Moon persuaded Donald Trump to hold direct talks with the North Koean leader Kim Jong-Un yet this has not prevented the North from pursuing its weapons programme, using threatening language and cutting off relations with the South. International sanctions on North Korea remain tight. Mr Moon has pledged to reward the North with economic support if it takes a more cooperative approach.

Mr Moon recently appointed a new foreign minister named Chung Eui-yong. He is a former national security adviser and a staunch proponent of the South Korea-U.S. alliance. This could be seen as a signal by Mr Moon to the Biden administration that South Korea is prepared to give America its backing, in return for help on the North Korean issue.

President Moon had a telephone conversation with President Xi Jinping of China the night before his speech to the World Economic Forum. Mr Moon told Mr Xi he wants close exchanges with China in various fields such as pandemic response, economy, trade, culture and education.

Quote: “China and the ROK have stuck together through thick and thin and have joined hands to promote exchanges and cooperation in various fields, which have yielded fruitful results.” Source: China’s Ministry of Foreign Affairs.

Analysis: If the World Economic Forum had taken place in Davos, Mr Xi and Mr Moon would have enjoyed a dinner together followed by private talks. The official account of their telephone conversation suggests Mr Xi is keen to try to assert his influence on South Korea. For South Korea, the tense relationship between the US and China is a problem. The country remains at the centre of a geopolitical tug of war between the two great powers. Mr Moon’s goal is to maintain a peaceful, balanced relationship with both of them. It remains to be seen whether this will be easier under Mr Biden than it was under Donald Trump.