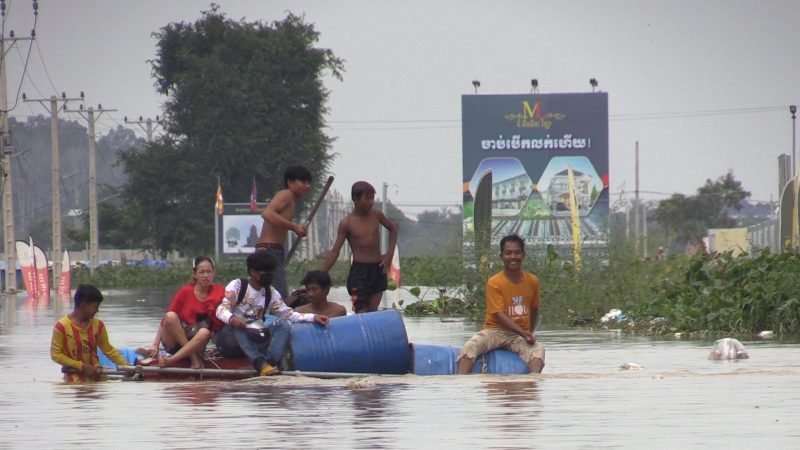 Cambodia’s most famous architect, the late Vann Molyvann, said that “cities should be built not by landfill but by incorporating water into their design.” His advice was ignored, and Cambodians displaced by floodwaters are now paying the price.

So far this month, about 77,000 households in 11 provinces have been affected by flash floods. At least 24 people have been killed, and tens of thousands displaced from their homes. These figures are likely to rise, as further rains are forecast through the rest of the month.

The full toll will take time to emerge and may never be accurately tallied. Urban flooding is known to favour the spread of waterborne diseases such as gastroenteritis, dysentery and cholera.

The root causes of the devastation are the corrupt distribution and management of land and the absence of any system of rational land-use planning. This is not to be wise after the event. The way in which Prime Minister Hun Sen’s policies have worsened the risk and impact of flooding was clear to everyone before the current floods.

The worst affected area is Battambang province, where almost 39,000 households have been affected. Floods there are a regular occurrence, with all parts of the provincial capital having been hit in 2000, 2003, 2005, 2006, 2007, 2011, and 2013. Research in 2019 found that flooding in Battambang city is usually “a result of poor urban planning and management. The city has been built without any appropriate controls.”[1]

In and around the city, wetlands, paddy fields, and floodplains have been converted into real-estate developments, with access to the land dependent on political connections and wealth, rather than any objective administrative process.  An unnamed municipal official in charge of land registration in the city admitted to the researchers that land-use plans and building regulations play a crucial role in the floods: “If we manage to control or regulate land development or construction based on the regulation at the different levels, both the municipality and provincial levels, then there will be no flooding.”[2]

Trapped in the Lowlands

It’s a similar picture in Phnom Penh, also affected by the floods this month. The whole city sits within the floodplain of the Mekong River, which rises by between 8 and 12 metres during the annual monsoon season. Despite its rapid growth, the city lacks an overall drainage and flood-protection system.

Researchers led by François Mialhe have found that the destruction of the city’s wetlands means that poor people living in informal settlements are more vulnerable to flooding than wealthier citizens.[3] Developers in Phnom Penh have sought higher land that allow drainage, meaning that more water builds up in the lower-lying areas of the city.[4]

The impact of filling in lakes in the city is worsened by the scarcity of public parks and green spaces that can absorb rainy season waters. According to Mialhe, the filling of lakes and the destruction of alluvial forests represents “a net loss of ecosystem services, some of which, such as flood mitigation, affect many thousands of people. A spatial planning strategy should be deployed as a matter of urgency given the brisk pace of land-use changes under way.”

At the national level, the wholesale destruction of forests permitted by Hun Sen, often acting in the interests of Chinese investors who want to develop the cleared land, has reduced the ability of our soils to absorb water. According to Global Forest Watch, tree cover in Cambodia dropped by 26% between 2000 and 2019. The connection between deforestation and flooding has long been understood. Globally, it has been calculated that cutting natural forest area by 10% results in flood frequency increasing by between 4% and 28%.[5]

Forests must be replanted as a matter of urgency. But in an institutional vacuum such as that which exists in Cambodia, planting trees is not enough. The best long-term way to improve flood resilience in Cambodia is to create a modern land registry, run by institutions capable of delivering a rational pattern of land use. This supposes a consolidation of democracy.