Iraq – Before and After Saddam Hussein 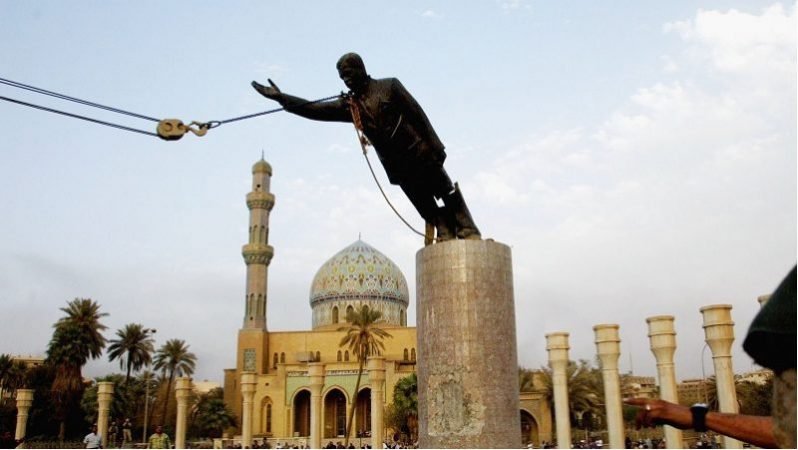 The state of Iraq in which shares its borders with Iran in the East, Jordan in the west, Syria in the North-West, Turkey in the North and Saudi Arabia and Kuwait in the South has three main demographic groups. The Shias of Iraq form majority of the population who mostly live in South Iraq followed by Sunnis who live in North and Western parts of Iraq and Kurds who live in far North of Iraq. Post World War 1, the British Mandate imposed Hashemite rule which was seen as a pro-Western Government by the common people of Iraq. The Hashemite ruler Faisal 2 was overthrown in 1958 by army officers led by General Abd-al Karim Qasim. Qasim was executed after five years of his rule though he survived an assassination attempt planned by Saddam Hussein and his group for which Saddam had to escape to Egypt for three years. Qasim was succeeded by Abdul Salam Arif who was overthrown in a bloodless coup in 1968 which paved the way for Ahmed Hasan al Bakr to power and Saddam Hussein as his deputy.

Saddam Hussein assumed the presidency of Iraq in the year 1979 after the resignation of al Bakr. Soon after coming to power, Saddam Hussein read a list of 68 names who were the members of Ba’ath party to be found guilty for treason, out of which 22 were given the death sentence. This unprecedented move was seen as the beginning of one of the most brutal dictatorships in the world.

In 1979, Iran witnessed the world’s first Islamic revolution where supporters of Ayatollah Khomeini overthrew the Shah Government of Iran. Iraq has a majority Shia population faced a threat of undergoing the same. With an aim to get control over the border region of Khuzestan in Iran which is an oil-rich province and to minimize the threat of possible revolution, Saddam launched an attack against Iran in 1980 but was surprisingly met by strong Iranian resistance. Eventually, after two years Iraq had to vacate all the territory it occupied and instead called for a peace deal to end the war. Iran on the other hand was determined to teach Saddam a lesson and continued the war. Iraq was able to defend the Iranian aggression with the help of its Arab allies Saudi Arabia and Kuwait and the indirect support it had from the US and USSR. The war finally ended in a stalemate in 1988 with Iran accepting the UN-mediated ceasefire.

The war had put Iraq under a huge debt of 30 Billion dollars from Kuwait. When Kuwait refused to cancel the debt, Saddam Hussein ordered Iraqi forces to invade Kuwait in the year 1990. The threat of possible aggression by the Iraqi forces against Saudi Arabia which is the world’s largest oil producer country evoked the US and its allies to station its forces in Saudi Arabia. When Saddam Hussein refused to withdraw from Kuwait, President H.W Bush on 16 January 1991 launched Operation Desert Storm which became one of the largest air campaigns. Kuwait was finally liberated from the clutches of the Iraqi forces after six weeks of Air attack and just 100 hours of the ground campaign.

The rhetoric of possessing chemical and Nuclear weapons by the State of Iraq under Saddam Hussein prompted the allies of the United States to support it in waging war against Iraq.  President Bush accused Iraq of harbouring Al-Qaida terrorists who were suspected of being involved in planning 9/11 attacks. Despite Iraq agreeing to follow the United Nations protocol, President Bush threatened Saddam Hussein with a warning to either leave Iraq or be ready to face dire consequences. As a result when Saddam refused to pay heed to the ultimatum, President Bush launched Operation ‘Iraqi Freedom’ in the year 2003, an attempt on part of the United States and its allies to invade Iraq militarily. Within no time, US forces were able to capture Iraq and on December 13, 2003 they were able to find Saddam Hussein who was hiding in a hole on a farm near the Northern city of Iraq, Tikrit.

Following the invasion, an interim Government known as Coalition Provisional Authority (CPA) was formed under retired Army Lieutenant General Jay Garner who was removed shortly after assuming the position by U.S government citing his incapability of implementing De-Ba’athification process. American diplomat Paul Bremer who replaced Jay Garner as CPA chief gave orders to terminate Ba’ath party members who previously held public sector jobs and Ministerial posts as a part of De-Ba’athifiaction plan. He also passed orders to disband the Iraqi Army which in turn created huge resentment among the Sunni population of Iraq. In June 2004 the CPA ceased its power to the Iraqi Interim Government.

In 2005, for the first time after time after the US invasions, elections took place in Iraq to elect 275 Transitional National Assembly Members whose purpose was to draft a new constitution. United Iraqi Coalition which consisted of 22 Shia Parties bagged the majority of votes nevertheless a minuscule percentage of Sunni voters came out to vote. In December 2005, Iraqis voted to elect a new parliament in which the United Iraqi Alliance again emerged as the single largest coalition falling just 10 short for what was required to rule without outside support. As the Shia population of Iraq assumed powerful positions in the Government, violence towards the Sunni population increased. There were frequent clashes between Shia and Sunni militias with the latter frequently resorting to attacking Shia pilgrimage sites.

Sectarian violence between the two rival sects of Islam was on a rise. One of the most infamous and influential Sunni Jihadist at that time Abu Musab al-Zarqawi along with his bunch of radical Sunni fundamentalists formed one of the deadliest groups spreading violence against the Shia community. He formed an alliance with the Al Qaida which didn’t have much influence in Iraq and the alliance came to be known as Al-Qaida in Iraq(AQI). AQI was becoming a challenge for the US forces to counter as it was slowly spreading its tentacles over major cities of Iraq. But what came as a surprise to the rest of the world and seen as a victory for American foreign policymakers, Sunni Militia groups which were earlier fighting against the US troops switched sides to fight against the Al-Qaida in Iraq(AQI) and other Jihadi groups. The Sunni Awakening Movement as it was known brought US forces and Sunni militias under a common umbrella which grew into a larger force within a year. In 2006 Zarqawi was killed in a US airstrike. The same year Saddam Hussein was also executed who was found guilty of committing crimes against humanity by Iraqi Special Tribunal. President Bush in 2007 called for an additional 20000 troops to be deployed in Iraq to control the growing insurgency. US forces partnering with their Sunni Allies were able to eliminate the AQI threat from Iraq. The fragmented AQI after Zarqawi’s death renamed itself as Islamic State in Iraq which until 2011 had very less influence in the region.

With President Obama assuming the office of US Presidency in 2009, the US forces slowly ceased its control over Iraq and started handing it over to Iraqi authorities. Owing to his poll promise, by 2011 President Obama directed all the US troops to withdraw from Iraq. Abu Bakr al-Baghdadi became the chief of Islamic State of Iraq after the death of his predecessor in 2010. Baghdadi tried to rebuild the group with the help of Saddam Era military and intelligence officers who were formerly loyal to the Ba’ath party. In neighbouring Syria, Sunni rebels rose against the Assad regime. Eyeing a perfect opportunity to increase the group’s influence outside Iraq, Baghdadi sent his operatives to Syria to fight alongside the Sunni rebels setting up a joint front al-Nusra . In 2013, Baghdadi announced the merger of all Al-Qaida allied forces in Syria with his forces in Iraq to form the Islamic State of Iraq and Levant. Top Leaders of Al-Qaida and Al-Nusra were unhappy with the unilateral decision taken Baghdadi and refused to validate the group.

Within a year of its formation, ISIS launched a military-style invasion into Iraq which had the support of its Sunni population who were not ready to accept Shia dominance in the Iraqi government post-Saddam rule.  Within a few days, ISIS was in control of the majority of Syria and a major part of Iraq. They were able to capture a part of Tikrit and Mosul in 2014 with latter having a population of 2 million people but were pushed back by Peshmergas from capturing Kirkuk. It took two years for the Iraqi Army with the help of Pehsmergas and assistance from the US Air force for starting to recapture their major cities. In 2017 Iraqi Army had taken all the territory and Oil deposits it had lost to ISIS under its control.

In 2018 Iraq was due for its parliamentary elections. The election was a three-cornered fight involving the incumbent Prime Minister of Iraq Haider al- Abdi’s Victory alliance, Iran backed Fatah block and the Shiite cleric Moqtada al Sadr’s alliance ‘Saairum’. Sadr who was seen as an adversary of the United States and was a vocal critic of Iranian influence in Iraq was unable to take the position of Prime Minister as he didn’t contest elections. On October 24 after much deliberation and continuous accusation by the opposition of the elections being rigged, Adil Abd al-Mahdi was sworn in as the Prime Minister.

The most recent event which is said to have a huge impact on the Geopolitics of West Asia was the killing of General Qassem Soleimani who was the commander of Iran’s Quds force in a US drone strike at Baghdad Airport. Iran in retaliation had launched missiles at Iraqi bases which were inhabited by US troops. US President Donald Trump claimed in a statement shortly after the attack that none of the US personals were killed in the strike which eventually avoided escalation of the conflict between Iran and the United States on Iraqi soil.