The Delusional Despot: Erdogan’s experiments with the Muslim World 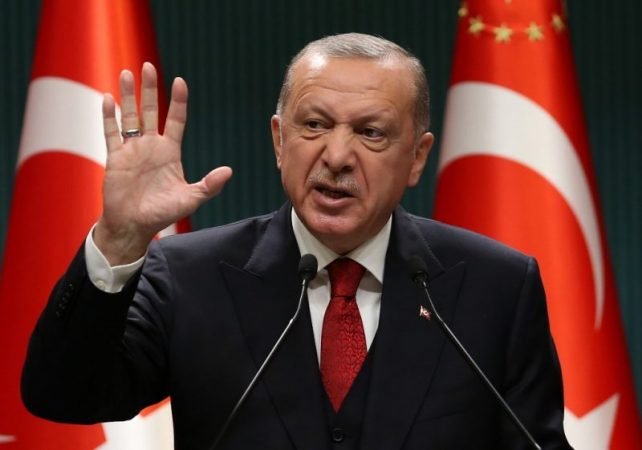 President of Turkey, Recep Tayyip Erdogan gestures as he gives a press conference after the cabinet meeting at the Presidential Complex in Ankara, Turkey, on September 21, 2020. (Photo by Adem ALTAN / AFP)
PDF Button

“In the Midst of Chaos, there is also opportunity”

Modern-day Turkey was founded in 1923, envisioned on the principles of secularism and western modernity by Mustafa Kemal Ataturk. The nation upheld its constitutional values throughout the troubled times of the Islamic revolution in various countries. Hence, Turkey remained unaffected even when its neighbours were threatened by Islamic fundamentalists. But the accession of Recep Tayyip Erdogan to power has altered its national character. Erdogan, with his iron fist, has occupied the pillars of democracy, suppressed dissidents and limited citizen’s freedom of expression. He has launched multiple global initiatives centred on pan-Islamism (or the notion of ittihad-i-islam prevalent during the Ottoman period) to satisfy his conservative vote bank in Turkey and to form a new Muslim front without the Arab dominance. In short, Erdogan wants to be the new Caliph of the Islamic world by replacing his nation’s moderate Sufi heritage with an aggressive Salafi Islam.

Erdogan became the Prime Minister of Turkey following his Justice and Development Party’s (AKP) victory in 2002 general elections. Subsequently, he won 2007 and 2011 elections and later elevated himself as President of the Republic in 2014. According to its constitution, the post of the Turkish President was ceremonial. Erdogan, though a constitutional referendum in 2017 made massive changes to Turkey’s constitution and changed the mode of governance from Parliamentary system to Presidential form. He abolished the post of Prime Minister and made a provision to include 2-3 vice-presidents. Further, the number of times an individual could hold the office of president was limited to 2. But in the event of parliament calling for an early election in President’s second term, the individual had the right to contest election once more. Thus he has legitimised his stay at the office of President till 2028.

AKP is known for its ultra conservative-Muslim vote bank. Most recently, the world-famous Hagia Sophia museum was converted to a Mosque and Erdogan lead the gathering of devotees for the first prayers to post its conversion. Even though this move attained global condemnation, Erdogan’s posturing as a crusader of Muslims has found an audience in the Islamic world. Later he also ordered the conversion of Kriye Museum, which was an ancient Orthodox Church, to a Mosque. ‘Imam Hatip’ School is another instrument used by Ankara to Islamise the Turkish society. These state-run schools are meant to give education based on Islamic values to young students. There has been a steep increase in the amount of money pumped by the Erdogan administration to strengthen these Imam Hatip schools to materialise his agenda for the total Islamisation of Turkey.

Following the failed military coup of 2016, Erdogan jailed around 40,000 people and dismissed another 130,000 from the government service. In Turkey, Anti-government protestors are condemned, witch-hunted and physically targeted. Turkish media is kept under draconian censorship laws and the government is accused of sabotaging the judiciary. The Turkish government had also launched an International news channel in 2015, TRT news, to spread government’s propaganda worldwide.

Erdogan: An over ambitions trouble maker

Ankara had been designing strategies to deploy its soft power to have a maximum global impact.  Turkish TV show Ertugrual became immensely popular in Pakistan and Azerbaijan. This soap, based on the life of Ertugrul Ghazi was a quality product from the Turkish entertainment industry in its visualisation and story-line packed with emotional overtones. It generated a feeling among its viewers about the lost glory of Islam, which the Turkish administration wants others to take up. The show was produced by Kemal Takden who is indeed a member of Erdogan’s AKP. After the broadcasting of ‘Ertugrul’ in Pakistan, two of the legendary hero’s statues were erected in Lahore.

To gain sympathy among the hardcore Islamists worldwide, Erdogan has been raising Kashmir issue at various international forums like the United Nations and Organisation of Islamic Cooperation (OIC). He had condemned India’s decision to abrogate Article 370 and convert the state into two Union Territories. Recently, while addressing the United Nations General Assembly (UNGA), Erdogan called Kashmir “a burning issue”. India slammed his statement by calling it a “gross interference in India’s internal issues”. His reference to Kashmir goes in tantrum with Pakistan Prime Minister Imran Khan’s address to the UNGA. Khan mentioned Kashmir 18 times in his televised speech which was refuted by India calling his arguments as ‘lies, misinformation and war-mongering’. Erdogan’s ‘Kashmir-rant’ is seen in the context of growing diplomatic relationship between Ankara and Islamabad, which alarms New Delhi.

There are intelligence reports of Turkey’s alleged involvement in activities aiming at destabilizing India. The report claimed that Turkey had dubious economic dealings with various hardliner Islamic organisations working in India. While addressing the National Assembly of Pakistan, Erdogan had compared the “Struggle of Kashmiris” with the Ottoman Empire’s fight during World War 1. It directly indicates the Turkish approval of Pakistan using its proxies in India to spread terror. Even after trying to internationalise Kashmir issue, the Pakistan-Turkey axis couldn’t find much participants to speak against India.

With more Arab nations warming up to Israel following the ‘Abraham Accord’ (Turkey right away condemned this agreement) and OIC not being keen on entertaining Pakistan on Kashmir issue, there is an attempt to create an alternative platform for like-minded countries. This proposal with China’s blessings includes Pakistan, Turkey, Qatar, Malaysia and Iran. These Islamic nations, united to show the spirit of Islam remains mum on China’s persecution of Uighur Muslims in Xinjian, in fact, Erdogan even decided to extradite Uighurs to China. Turkey sends Uighurs to a 3rd country from where China could claim them. Iran is notorious for sponsoring terrorists in multiple nations including Yemen, Lebanon and Palestine. While in Pakistan, Shias are persecuted by the majority Sunni population. In Turkey, Kurds are constantly targeted by the Erdogan administration . It is quite embarrassing that these nations, with a poor record of human rights, lecture India on Kashmir.

Turkey was also accused of serving as an entry point to the radicals who came from far away territories to join the said caliphate of Islamic State transgressing Iraq and Syria. The Turkish forces have occupied a zone in Northern Syria and have supported the rebels who fight against Syrian President Bashar Assad and Syrian Kurdish Force. Recently, Syrian foreign minister Walid-al-Moallem while addressing UNGA called Turkey the ‘main sponsors of terror’. He also said that “the current Turkish regime has become a rogue and outlaw regime under international law”. With the Syrian forces backed by the Russians attacking rebel towns and sanctuaries, there were reports of casualty on the side of the Turkish military. Turkey’s antagonism towards the Kurdish forces that fight against the terrorist outfits is also creating troubles in north-eastern Syria. Erdogan threatened his NATO ally Greece of waging war over Mediterranean territorial disputes. He also intimidated the European Union of flooding them with refugees from Syria. Turkey even downed a Sukhoi Su-24M while the Russian Jet was bombarding the rebel-held areas. Turkey is peeping into every geopolitical problem of the region, making it even worse.

Erdogan’s ultimate aim is to place Turkey in the emerging world order. But the tactics he opted seems to damage the very foundations of the republic. Even when the Islamic nations are liberalising their social norms, Turkey, seems to be taking a time travel back to its pre-modern past. The invisible hand of China shouldn’t be missed while understanding the disruptions caused by Turkey. China is effectively using Turkey to carry forward its motto of challenging the hegemony of the United States. What China promises Turkey, for the time being, is the promise to liberate it from any of the possible economic eventualities. But this could well be a part of China’s debt-trap diplomacy to make Turkey one of its feudatories. Erdogan believes that he could become the ultimate ruler of the Islamic world by turning his republic into a rogue state. The Turkish President’s unrealistic aspirations look fine on paper, but even in the game of chess, a pawn cannot be promoted as another King. Erdogan’s masquerading as the neo-Caliph will not hold the troubled times awaiting him in the geopolitical realities of the region.

Ganesh Puthur is currently pursuing Post Graduate degree in History from the Department of History, University of Hyderabad, India