COVID-19 in Japan: How did Japan manage to maintain a lower fatality rate? 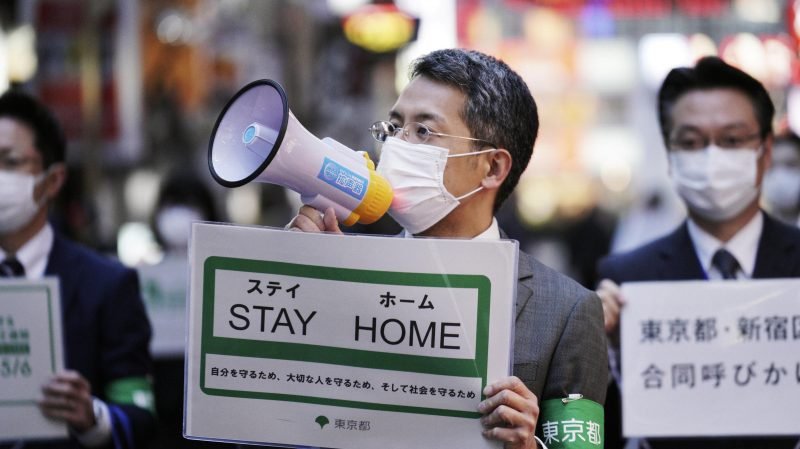 Staff of the Tokyo Metropolitan Government urge people to go home from the Kabukicho entertainment district in the Shinjuku Ward in Tokyo Friday evening, April 24, 2020. Japan's Prime Minister Shinzo Abe expanded a state of emergency to all of Japan from just Tokyo and other urban areas as the virus continues to spread. (AP Photo/Eugene Hoshiko)
PDF Button

In February, the Diamond Princess Cruise ship became an international vessel that shipped the deadly virus into Japan. After sailing on the waters of Hong Kong, Vietnam, and Taiwan, the ship returned to Yokohama and started disembarking people who showed signs of Covid19 on its way. According to the researchers from Tokyo’s National Institute, the ship became a virus hotspot and was later quarantined for 14 days. The quarantine measures were criticized for being inadequate as many passengers violated the rules and helped the virus to spread. According to The Hindu, out of 3,700 passengers, more than 540 people were infected and 14 of them died. This incident started the chain of infectious virus and forced the government to shut down schools, bars, travelling, etc.

It is true that Japan got affected quickly due to the ship incident. As of 26/08, there are a total of 63,822 cases, among which 51,688 recovered and only 1,209 died in Japan. The American Center for Disease Control and Prevention states that the risk of severe illness from Covid-19 increases with age, especially those who are 85 and above. However, Japan has defeated this fact by successfully keeping its mortality rate lower.

Controlling the Virus Spread with a Lockdown

The government did no delay to adopt a 3C model. Under this model, citizens were asked to avoid closed spaces, crowded places, and close-contact settings such as Karaoke, bars, pubs, and public spas. Apart from this, Japan took a cluster-based approach and tracked groups that could have potentially spread the virus. According to The Diplomat, this approach tracked the source of infection and isolated infected people to prevent further spread. Hence, instead of conducting massive testing, Japan opted for pinpoint testing.

Just like other East Asian countries, Japan also follows Confucius ethics that prevent physical contacts like hugging, kissing, shaking hands, etc.  Moreover, in Japan, conversing in a crowded place is labelled in a bad manner. Apart from these factors, a Tokyo University professor Tatsuhiko Kodama believes that Japan may have had COVID before that immunized people against Covid19. According to the BBC’s report, the professor explained that there are two types of antibodies (IgM and IgG) and IgG antibodies were found faster than IgM antibodies in many Japanese. Professor Kodama explains that “in a primary viral infection the IgM response usually comes first and the IgG response appears later. However, in secondary cases (previous exposure) only the IgG response increases rapidly.” Thus, it shows that people in Japan may have been exposed to a similar virus in the past. Professor Kodama assumes that this could have been due to a SARS-like virus that hit the East Asian region (Japan, South Korea, China, Taiwan, and Hong Kong) before.

On being asked if Japan possessed a special power to mitigate the death toll, Deputy Prime Minister attributed this fact to the ‘superior quality’ of Japanese people. His comments were condemned as Japan has a notorious history of portraying racial superiority through the act of imperialism. The editor of Asian Affairs magazine and an expert on Japan, Mr Duncan Bartlett has shed some light on Deputy PM Aso’s comment. He states that “Japanese are very clean and hygienic people, who use masks frequently. Moreover, Japan also provides a sophisticated healthcare system and insurance that look after people who fall sick.” Thus, people’s hygienic lifestyle, responsible attitude towards society, and well-maintained hospitals attribute to Japan’s higher living standard and lower death rate. Moreover, the mask culture that some of the countries are experiencing now is common in Japan. Masks are a part of people’s casual attires. In 1919, Japan had to face flue pandemic and thus masks are worn even if someone catches a minor cold. Also, when Tuberculosis hit Japan in the 1950s, the government set up nationwide public health centres to track infections and report them, which has currently helped in controlling the Coronavirus pandemic.

Loss due to Corona

One of the biggest blows that Japan faced during the pandemic is the postponement of the Tokyo Olympics to 2021. Mr Bartlett points out some important points about its impact on the Japanese economy. He states that it is a “massive disappointment for the people, who were excited about the games.” If you go to Tokyo Metropolitan Government Building, you would be able to find an exhibition about the Tokyo Olympic Games 2020. Many enthusiastic people would warmly welcome you and give you a brief tour explaining the games. Apart from this excitement, the Coronavirus will impact the economy of Japan negatively. Japan faced economic degradation during the Great Eastern Japanese Earthquake in 2011 and hence the Olympic event was supposed to make up for the economic loss that happened during the disaster. Also, the games would have boosted tourism in Japan, which would be impossible at the present times. Moreover, even in 2021, Japan would have to take extra precautionary steps as it would have to invite people from all over the world and organize sports in close quarters.

Although there has been an economic loss in business due to the Coronavirus, people have found innovative ways to run their business under the ‘new normal’. For instance, according to The Japan Times, many restaurants have started using life-like mannequins to keep customers from getting too close.  Removing tables gave the restaurant a ‘vacant’ look but with the addition of dummies, people do not feel lonely and enjoy their meals.

Currently, there is a sudden rise in Covid19 cases, especially in Tokyo. Many experts have credited this to the government’s haste to normalize the situation and reopen business instead of putting a proper lockdown like other countries. However, Mr Bartlett has a different point of view. According to him, Japan is a democratic nation. The government can only advise but not send armed police to stop people from going to bars. Thus, it depends on people’s compliance with the government’s assistance. Also, in Tokyo, clusters are reappearing. After the lifting of a nationwide emergency, people are letting their guards down. They are partying late at night and gathering in crowded spaces such as bars and restaurants. Mr Bartlett also emphasized on the fact that the political background of Japan cannot make the government to impose its will over people.

Still, it is no less than a miracle that a nation with no lockdown and open borders, more dense population and, aged people has managed to lower its death toll and control the pandemic. Also, one should not forget that both government and people have worked together to bring the numbers down. The government lifted the restrictions first from the areas where youngsters lived. Moreover, the government also distributed free masks to every household. Fortunately, Japan has a population with the lowest heart diseases and the cases of obesity. This has reduced the number of people with comorbidities and thus shrank the casualty rate due to Covid19 in Japan.