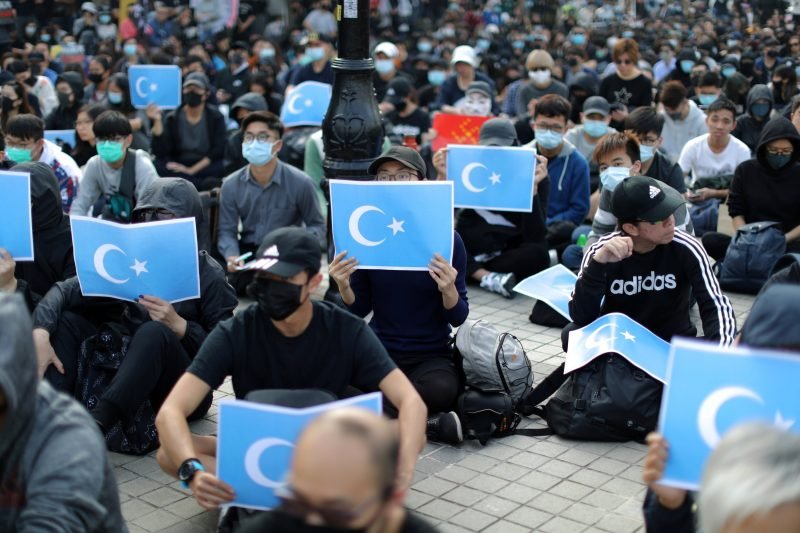 On March 19, 1996, the Standing Committee of the Political Bureau of the Chinese Communist Party held a top-secret meeting on “The Maintenance of Stability in Xinjiang,” presided over by Chinese President Jiang Zemin. A record of the meeting, known as CCP Document No. 7 of 1996, was disseminated as an internal document to the various Chinese government and CCP agencies.

Many organizations have emerged suddenly as “institutes,” “research institutes,” “writers unions,” “Uyghur mothers associations,” “educational associations,” and “cultural societies,” among others. These organizations have mobilized people around them to the point of paralyzing East Turkistani independence political activism; what is even odder is that their methods in terms of research are reminiscent of the Chinese method.

The Chinese state’s machinery usually operates by exploiting people’s desire for money and sex. Likewise, investigations have revealed that what keeps these organizations on their feet is money and abnormal sexual relations. Students have been tied with these organizations and forced to do their bidding due to the desperate need for small amounts of financial aid. In contrast, new immigrants are lured with the promises of helping to obtain green cards or residency, while others are threatened with arrest, deportation, or denial of their asylum applications. As a result of these methods mentioned above, those who became associated with these organizations and desired independence cannot express their desires openly and confidently or even leave these types of organizations.

put the financial burden of their intelligence operation on the Uyghurs themselves, who paid to be “smuggled out.” Chinese intelligence operatives put forth mysterious “able-bodied” people with “acquaintances” and “experience” to provide the “service” of smuggling Uyghurs out into Burma, Thailand, Malaysia, Vietnam, Cambodia, and Laos in exchange for money. As this was done through Turkish cooperation, they were then sent to Turkey and then into Syria and made out as “Uyghur terrorists.” It’s important to note that in October 2010 Turkey and China elevated their bilateral relationship to “strategic cooperation,” signing over 8 different secret agreements on economic, political, cultural, intelligence, and security cooperation.

Not ending there, “two birds were struck in one fell swoop,” and East Turkistan’s self-sacrificing spirited Uyghur people were sent out of East Turkistan using a method like “diverting the flood into the desert.”

These people do not have a strong sense of knowledge—the knowledge of how politics and intelligence work in general and of how religion can be used for political purposes. They only have pure and simple-minded beliefs and lack proper religious knowledge, which has benefited Chinese intelligence. In addition, because they were illiterate and ignorant enough to believe foolishly those who spoke with excitement and cunning words, it only helped to facilitate the work of Chinese intelligence with ease. In East Turkistan, where there is no way to cross one checkpoint from one town into another without special permission, they were loaded onto buses in large numbers and never questioned how they could come safely to the Chinese border in Yunan. On the contrary, because of these Uyghurs’ simple-minded beliefs, the Chinese intelligence’s mullahs (religious clerics) lured them into believing that “If Allah protects you, then no one can harm you.” Without raising any suspicions, these simple-minded Uyghurs ended up in Turkey and then Syria, foolishly thinking it was a “miraculous work of Allah.”

After arriving in Syria, they were divided into various groups. Some even joined ISIS, unaware that they were serving as the physical evidence to help justify the Chinese government’s propaganda. They still foolishly believe that they are fighting jihad “for the sake of Allah.” Even now, because they are under the control of Chinese intelligence, there is no way they will be of any use to East Turkistan; their lives might be spent fulfilling the tasks given to them by Chinese intelligence.

As a result, the political and ideological strata of the East Turkistani diaspora have been injected with another, perhaps even more complex group(s), of so-called “mujahideen” who have lived in Syria for some time and later returned to Turkey. Since their ideological stubbornness and fanaticism has been shaped by Chinese intelligence, they do not see any of the political activities taking place in our diaspora as right, deeming all of them as wrong and heretical—i.e., “anti-Islamic.”

Additionally, following the start of the ongoing genocide of Uyghurs and the opening of concentration camps, the Chinese government has thoroughly monitored Uyghurs even in their own homes and restricted travel for practically every Uyghur. Even under this type of tight security and surveillance, some Uyghurs were able to leave East Turkistan untouched in 2017 mysteriously. Thus, it is beyond the capabilities of one person to convince this wide array of different groups and classes of people in the diaspora to cooperate while maintaining their organizations’ independence, let alone unite them under one banner.

The issues mentioned above are how the Chinese intelligence has disintegrated the East Turkistani diaspora. Under these circumstances, an organization or a group of organizations cannot be able to do something remarkable without the help of a powerful state. Any organization structure that wants to convince the people must do something visible and win the people’s trust. Given the situation that most of the people in the East Turkistani diaspora are failing to follow, and capable people are refusing to get involved in the independence movement, how is it possible to do something exemplarily and meaningful? These two issues are progressing together in a vicious cycle. Also, because our deprived people have been deceived repeatedly too many times in history, it is understandable for them to distance themselves from organizations. Our people have been waiting for the various organizations to prove themselves. On the other hand, it is difficult for organizations to prove themselves worthy of support as they are mainly distant from most of the people.

It is also conceivable that those benefactors who wish to support the East Turkistan cause are losing hope as they see the broad unprofessional behavior of East Turkistani / Uyghur organizations. As a result, to this day, no external power has truly extended its hand to help this deprived nation.

What needs to be done? It is clear that those who wish to help are observing our situation closely, and they might not be able to decide which organization, group, or entity to support. If this type of observation continues without action or tangible support, it will be a continuous observation. In that case, the quality and professionalism that the benefactor(s) are expecting will not come about; instead, the professionalism and quality of the East Turkistani organizations will only decline and may even be completely eroded.

Thus, if the benefactor(s) chooses and helps an organization with the correct ideology and mission and is untainted from Chinese influence, then the organization’s structure, quality, and professionalism and the entire East Turkistan national movement will be improved and be revitalized. Following that, the general East Turkistan diaspora will be convinced, and the majority of them will follow that organization or entity. Only in this manner can the destruction and malign activities of the Chinese intelligence hindering the East Turkistan national movement from progressing be overcome.

China continues its ongoing genocide in East Turkistan and continues to expand its political, military, and economic influence into the Indo-Pacific, South Asia, and Central Asia through the Belt and Road Initiative. Additionally, China is also repeatedly violating India and Taiwan’s sovereignty and territorial integrity through sporadic incursions and threatening them with further invasion. In this context both the international community, especially India and Taiwan, must understand that supporting the restoration of East Turkistan’s independence is both the morally correct stance and a way to make common cause against a shared common enemy. This support is also crucial for the regional security in Central Asia and beyond, which is being rapidly overshadowed by China. Resisting Chinese intelligence operations in the East Turkistani diaspora and genuinely offering a hand of help to East Turkistan is a fundamental step that needs to be taken.

Ghulam Yaghma is an Uyghur Canadian writer, poet, and East Turkistani independence leader. He is the current President of the East Turkistan Government in Exile. You can follow him on Twitter @YaghmaGhulam