Massive torch rallies in PoK due to Chinese dams 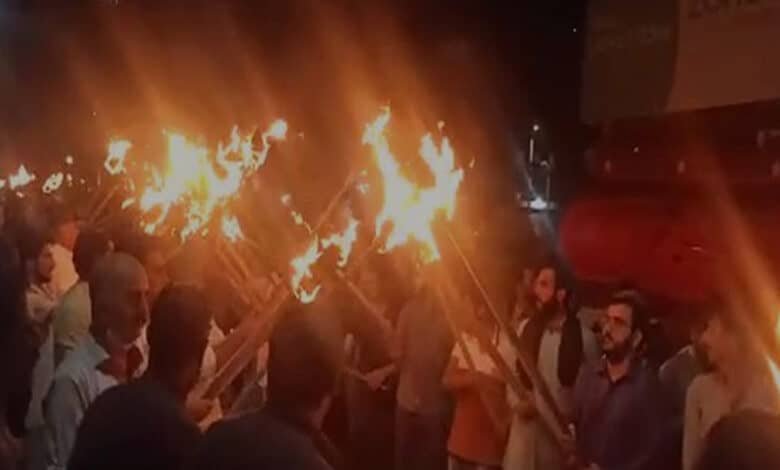 Last night, a massive torch rally held in Muzaffarabad in the wake of protests going on in Pakistan occupied Kashmir (Pok) over the construction of Chinese Dams. They were against the major Chinese dams to be constructed on Neelum -Jhelum River in PoK. Over a thousand people participated in the protests. There were chants screaming, ‘Neelam Jhelum bhene do, humein zinda rhney do’.

Since India has revoked the special status of Jammu and Kashmir, Pakistan was seen spurring up its engagement in the PoK region. Meanwhile in Pakistan occupied Kashmir, China is fishing in troubled waters again, helping Islamabad to build dams on controversial territories. Recently, China and Pakistan have jointly signed a deal to construct the Azad Pattan hydropower project and Kohala hydropower project on the Neelum-Jhelum River. This $1.5 billion project is the second massive hydropower project signed between Pakistan and China under CPEC this year. Azad Pattan is one of the five hydroelectricity projects proposed over Jhelum. Signed on June 23, the Kohala project will be producing 1,124 MW of electricity while the Azad Pattan project, signed in July 2020, will produce 700.7 MW of electricity. These projects are expected to be over by 2026.

Both these projects fall under China’s faulty China Pakistan Economic Corridor (CPEC). The CPEC is a part of China’s ambitious BRI initiative. It is a death trap for Pakistan. China has neo-colonized this entire country under this CPEC. Pakistan owes more money to china than to the IMF. The CPEC is one of the flagships projects of China’s ambitious cross-continental Belt and Road Initiative. Apart from its BRI debt traps, these establishments are apart of China’s strategy to weaponize water. It has the highest number of dams in the world which Beijing uses to control the navigation of waters in various regions of South- Asia.

$1.54 billion will be sponsored by the China Gezhouba Group company.  The three gorges cooperation is constructing these billion dollars projects, Azad Pattan hydropower project and Kohala hydropower project. Due to these projects, they’ve changed the course of the rivers. Massive constructions of dams and river diversions further rattled the locals in Muzaffarabad. The dams would likely to cause diversions in the river flows and threatens their natural ecosystem. This has firstly caused a severe rise in temperatures in Muzaffarabad and secondly had turned rivers into rivulets. Locals are hitting out Imran’s govt. High Chinese presence in the region is unacceptable to the locals. They knew what has happened to Hambantota. They believe that China and Pakistan have threatened the lives of the locals, damaging the natural resources and endangering the livelihood of its citizens.

India has long opposed the CPEC and slammed this move because it passes through Pakistan’s illegal occupation of the Indian territories. New Delhi opposed the BRI primarily because the CPEC undermined the sovereignty of India. In the past too India has opposed projects jointly announced by Pakistan and China under CPEC. It has also objected to the construction of Diamer- Bhasha dam in Gilgit Baltistan. But a strong action is required on India’s part. Because Pakistan is trying to strengthen its footholds in its illegally occupied territory through these massive projects.