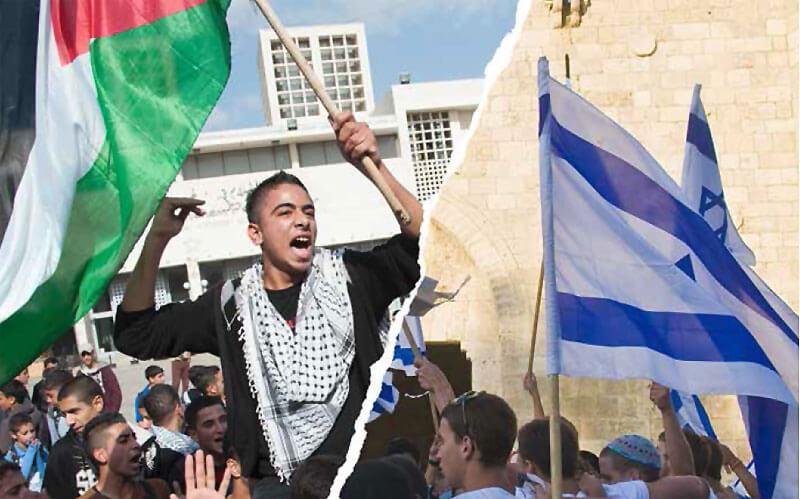 The peace of Westphalia which concluded in the year 1648 bought a sweeping set of changes in the western world. It gave birth to the concept of nation-state essentially meaning defining of boundaries of nations on the basis of a common language, ethnicity and in some rare cases religion.  This very idea of creating nation-states on the basis of ethnocentric identities resulted in the predicament of the minority population.

Jews whose traditional and spiritual home was in Palestine had to migrate to different parts of Europe since ancient times due to the hostile nature of the ruling kingdoms towards them and also in hope of better economic conditions. At the end of the nineteenth century, there were more than seven million Jews in the world out of which more than 6 million Jews lived in Europe.(jewishen.org). With the rise in ethnocentric nationalism in Europe there were was a wave of anti-Semitism that resulted in hate crimes and discrimination in the public sphere against the Jewish population. It was due to this very reason that a Hungarian-born Jewish journalist named Theodor Herzl who worked for an Austrian newspaper gave birth to the idea of creation of Jewish state.

Theodor Herzl is being regarded by the Jewish community as the father of political Zionism. In the late 1890s, he came up with a publication called ‘Der Judenstaat’ in which he contemplated the idea of the restoration of the Jewish state. Though he died at a very young age of 44, Theodor Herzl managed to divert the attention of the international community towards the Jewish question with him being engaging in activities such as ambitiously meeting the Ottoman Sultan in 1901 in order to purchase Palestinian land from them for the settlement of the Jewish population. The idea of Palestine being both the spiritual and national home for the Jews was picking up the fire.

Britishers made a correspondence in the year 1915 with the Hashemite family who were the rulers of Mecca to decide the fate of Arab provinces after the war.  The Hashemite in the correspondence demanded control over the Arab speaking provinces which did not include Egypt and parts of North Africa. In order to muster the support of Hashemite to fight against the Ottoman, Empire Britishers agreed to their demands with certain reservations. Britishers excluded the areas which fell to the west of Damascus, Hama, Homs and Aleppo from the territories demanded by the Hashemites on the grounds that those provinces were not entirely Arab-speaking which indeed also included the state of Palestine at that time and limiting the correspondence to only those provinces where Great Britain was free to act without hampering their relationship with the French. In 1916, another iconic agreement was signed between Great Britain and the French called the Sykes-Picot Agreement which pre-determined the division of Arab territories to be controlled by the two major colonial powers of that time after the end of World war one. In the agreement, Britain got control over the ports of Haifa and Acre in Palestine and the rest of Palestine was to be put under International administration with the consent of Russia and France.

In 1917, Britishers issued the infamous Balfour Declaration. Britain in that declaration expressed sympathy with the Jews and the Zionist cause and that Great Britain will support the establishment of a national home for the Jews in the state of Palestine. The declaration also pledged to protect the civil and religious rights of the non-Jewish population of the Palestinian state. The Zionists though misinterpreted this as support by the Britishers to create a Jewish separate state in Palestine nevertheless it was not mentioned anywhere in the declaration.

With world war coming to an end in the year 1918, Britain got entire control over the Palestinian state and Mosul which was in Sykes-Picot agreement was to be shared between Britain and French. In return French were given complete authority over Syria and Lebanon. Britain in a way had betrayed their Arab allies whom they had promised control over the Arab speaking provinces in the correspondence made between Hashemite and Britishers in 1915. In order to provide some compensation to their Arab allies who helped Britishers in the war against Ottomans, British conceded the territory falling east of Jordan river which came to be known as Trans Jordan to the Hashemite and appointed Hashemite dynasty king Abdullah ibn Husayn as its King.

Post world war 1 saw large scale migration of the Jewish population from Europe to the United States and the state of Palestine. But the United States closed its gates in the year 1925 which left the Jews of the world with only one choice and that was Palestine. Jews continued to migrate in hope of settling in their new promised homeland until a white paper was issued by the Britishers in the year 1939 to stop Jewish migration. The Britishers issued this white paper as a response to continuous resilience shown by the Arabs against the Zionist). Prior to the issuing of white paper in 1939, British also proposed of partitioning the state of Palestine where Arabs of Palestine were given 80 percent of the territory and Jews were given 20 percent of the territory. Jerusalem was neither to be given to Arabs nor to the Jews but kept under British Mandate. The newly formed Arab state will be annexed to the Trans-Jordan state. Majority of Arabs did not support the partition nevertheless leaving aside a small proportion, majority of Jews were in favour of the partition. The British finally withdrew their plan in 1938 in order to not to create animosity with the Arabs.

In the year 1939, Britain and France declared war on Germany and World war 2 begun. The Jewish community overwhelmingly supported the Allied Powers for their obvious reasons. Mufti Haj Amin al- Husseini who was appointed as the Mufti of Jerusalem by the Britishers in 1921 was vocal in his support for the Germans after being removed from his position in 1936 for his inciting riots in 1936 against the Jewish community in Palestine. Some may not see this as outright support for the Germans from the Muslim community as might argue that Palestinians also volunteered to fight for the Allied powers.

With the emergence of two new superpowers the Soviet Union and the United States, the Palestinian equation also changed. The United States became a key player in solving the Palestinian dispute as power possessed by Great Britain was in a rapid state of decline after the world war. Post world war 2, there was a genuine wave of sympathy towards the Jewish community due to the atrocities they had to face in Nazi Germany. The Anglo-American community was formed in the year 1946 to look into the affairs of Palestine. The committee decided to issue 100,000 certificates to the Jews for immigration to Palestine. The committee also nullified the 1940 land transfer regulation which forbade the sale of land in certain parts of Palestine to the Jewish community. Arabs, on the other hand, stood against the Jewish migration.

Britain with not being able to cope against the widespread violence committed by the extremist groups of both the Arabs and the Jews finally approached the United Nations to solve the dispute. The 2/3 majority of United Nations General Assembly voted in favour of partitioning Palestine with Jews receiving 55 percent of the territories and Palestinians getting 45 percent of the territories. Arabs who were already against the idea of partition were fumed to see 1/3 of the population of Palestine receiving 55 percent of territories. Arabs had outrightly rejected the proposal.

With Jewish Paramilitary force occupying the Palestinian land, the Arabs launched a war on them in 1948. All the Arab neighbouring states Egypt, Libya, Syria, Lebanon and Jordan joined the war against the Jews. The war resulted in the defeat of the Arabs. Jews got control over 75 percent of Palestinian territory whereas Egypt captured the Gaza strip and Jordan occupied the West Bank and East Jerusalem. The Jews of Palestine fought another war in 1967 against its Arab neighbours which is popularly known as Six-Day war which ended Jews in capturing West Bank, Gaza Strip, Golan heights East Jerusalem and Egypt’s the Sinai Peninsula. Under obligation of the United States and to put the effort into making peace with the neighbours, Jews vacated the Sinai Peninsula and handed over to Egypt in 1982.

In order to bring peace and stability to the region, several meetings were carried out in the months of 1992 and 1993 to sign Oslo Peace Accords. The Oslo Accords called for a withdrawal of Jewish forces from Gaza and West Bank and grant five years of limited autonomy to the Palestinian authority. In 1993 Palestinian Liberation Organization had reaffirmed the right of the Jewish nation of Israel to exist in a Palestinian state in return for the Jews to recognize Palestine Liberation Organization as the sole representative of Palestinian people.

After the failure of David Camp Accords in the year 2000 there was a rightward shift in Israel’s foreign policy. In the year 2005, the Jews withdrew from Gaza strip which later was occupied by Hamas in 2006. There have been a series of regular conflicts between Gaza and Israel’s Armed forces since then. The dispute between Jews and Arabs has still not been resolved even after so many years. The dispute between Jews and Arabs is a classic example of the problems created by the colonial powers by drawing artificial borders for their own interest.