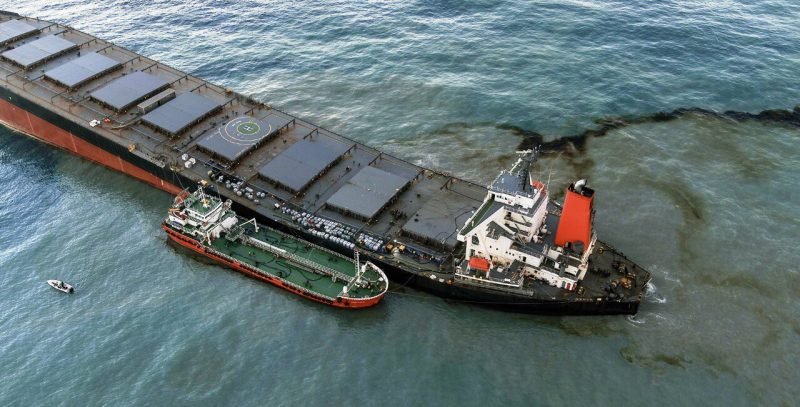 India and Mauritius have shared a very close relationship over the years with the bond only getting stronger by the day. India is Mauritius’s largest trading partner and is the recipient of a very high investment from India for its domestic infrastructure projects. It was on the 7th of August that the Indian Ocean island declared “a state of environmental emergency” after it experienced an oil leak from a Japanese owned ship. The ship ran aground offshore for a few days and ended up spilling the oil around the waters of Mauritius. President Jugnauth has already written to many countries seeking for help in clearing out the oil, which could possibly be a fatal threat to the lives of 1.3 million people living on the island. In the midst of all this, India open-handedly came to the assistance of Mauritius by offering to help with the oil clearance as quickly as possible.

Oil spills and their threat

Oil spills have time and again caused great havoc to marine habitat, exposing them to harmful chemicals and pollutants. It has the capability to permanently damage the fisheries and can be critical to the livelihoods of people dependent on these. Also, seafood from areas which have experienced oil spills has scientifically proven to be poisonous due to the presence of lead. While gigantic and extremely heavy spills catch the attention of people, small spills occur all the time slowly damaging and contaminating the water bodies. Oil is an important energy-generating resource and can be cheaply shipped only through the seas. Hence, great caution along with avant-garde technological methods must be adopted to minimise the damage caused.

What was the spill and extent of the spill?

It was on the 25th of July that a ship named MV Wakashio ran aground near the coral reef of  Mauritius which ended up spilling around 4000 tons of oil in the waters. The ship then eventually started cracking increasing the pace and the extent to which oil was leaking into the water. This comes as a big blow to Mauritius whose economy is heavily dependent on tourism especially along the sea. A state of emergency was declared by the government citing the reasons that the spill could heavily damage the water species, the food, health and tourism industry of Mauritius and hence a quick and strong action needs to be taken. Satellite images have surfaced all over the internet with comparisons showing the extent of the spill and the discolouration of water it has caused. The oil had also started accumulating near the shores of the island posing a serious threat to the people who could come in direct contact. Marine biologists point out that this level of a spill is enough to damage marine life, which is so inherent to the country of Mauritius. Though, Akihiko Ono, the executive vice-president of the ship’s operator, Mitsui OSK Lines, showed accountability by “profusely” apologising for the mishandling of the leaks and the havoc his company has caused.

How has the damage been sustained?

The moment the information about the leak came out, the first thing that was done was to try and pump out the remaining oil completely from the ship in order to try and avoid any further leaks into the ocean. Around 400 sea booms have been deployed in an effort to contain the spill. Various environmental activists and young students have come out to help in these tough times by volunteering in their own capacity to clear up the oil from the sea. Handmade floats made by these very people included materials known to have absorb oil, like cloth, leaves and even human hair. These floats have been reported to substantially reduce the spread of the oil to other parts of the sea. Mauritius, which asked for help from the entire world including the international body, United nations has received great help. France has also deployed special equipment for pollution control to Mauritius and India too offered to help Mauritius in these difficult times. The government of Mauritius came under strict criticism by the people that they did not act soon enough and a large part of the damage could have been prevented if the authorities acted swiftly.

Indian Oil Ltd situated in Mauritius has already positioned a barge at the site to extend assistance which in evacuating fuel oil from the vessel. Moreover, the Indian government in a statement released said that they are “exploring all possible avenues and requirements” for the salvage operations needed to protect the environment. They also revealed that they in constant touch with the authorities in Mauritius taking a close look at the situation and studying it. It is crucial to see how well the operations conducted will bring about relief to the small island on the Indian Ocean. Recently the Indian Prime Minister Narendra Modi inaugurated the new Supreme Court building in the capital city of Mauritius as a part of their successful bilateral engagement.