‘Namaste Caribbean’: Another Indo-CARICOM Meet During the COVID-19 Crisis? 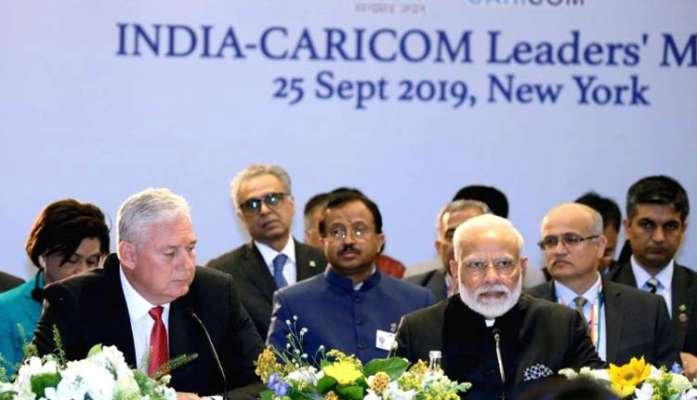 The Caribbean island nations have perceived India’s national image with leadership qualities. This perception would include two anticipations during the global pandemic caused by Coronavirus: i) India has the national ability to overcome the pandemic and its aftershocks in its own soil and ii) India would make its presence feel in the Caribbean by asserting the leadership qualities yet again during this crisis.

By the time of the drafting of this piece, the World Health Organisation (WHO) has reported 9,152 cases of COVID-19 infection and 308 deaths in India. The similar data for the Caribbean countries available with WHO shows that these island nations are in the initial phase of contagion with a low death count. So far only Dominican Republic has reached a stage of concern with WHO reporting 2,967 cases and 176 deaths. The reported cases in Barbados, Jamaica, Cayman Islands, St. Martin, Bahamas, Guyana, Haiti, St. Lucia, Dominica, Grenada, St. Kitts and Nevis, Suriname, Antigua and Barbuda, St. Montserrat, St. Vincent and Grenadines are between 2 to 50 with only a few or no death. Cuba with 669 infections and 18 deaths and Trinidad and Tobago with 112 cases and 8 fatalities seem to be falling in a third category.

Statistics is not an end in itself. It is symptomatic and to be read contextually for inferences. One inference that the WHO’s COVID-19 data on the Caribbean suggests tentatively is that the alleged link between the spread of the Coronavirus and a globalising world is not sufficiently substantiated. Several seriously minded academicians have wrongly characterised the Caribbean as an area of geographic isolation. The socio-cultural and economic history of the Caribbean makes it probably one of the most globalised and internationally one of the most intimately integrated regions with the rest of the world.

Also read: India as a Pharmaceutical Power of the world

Not a single report or academic piece produced on the political economy of the Caribbean have missed appreciating the Caribbean nations as ‘small open economies’ as these countries are small in geographical size and their economic risks and opportunities are directly influenced by the global boom and bust to the extent of economic resurgence or destruction. In a thought-provoking unpublished note produced previous week by Winston Dookeran and shared with this author thus speculates the post-COVID-19 aftershocks for the Caribbean in the following words:

“As the [global] economy enters into a ‘loop type’ cycle of shocks […], Global economic growth will drop dramatically. […] But buffers and shock absorbers are weak in the Caribbean economy. […] A tall order in any circumstances, but has dire complications to debt, credit, incomes and poverty levels. […] We are in unchartered waters, and the choice between ‘lives and livelihood’ would soon be a harsh reality. […] The COVID 19 pandemic cannot be solved by internal efforts only.  Global coordination and diplomacy are needed to add new resources – technical, business and financial – to the solution matrix.”

Winston Dookeran is an economist and has served his own country (Trinidad and Tobago) and other key regional positions in the Caribbean. Dookeran’s note is empirically grounded. Coincidently, Indian Government has also recognised his constructive contributions in the lives of the Indian community (the Indian diaspora) and the national politics in his country by conferring the prestigious Prabasi Bharatiya  Samman in 2017.

India has shown cultural, economic and strategic interests in the Caribbean in the recent past which is quite expected as almost half of the national population of Guyana, Suriname and Trinidad and Tobago are of Indian origin. India is a net importer of petroleum, whereas these three regionally influential Caribbean nations are rich with huge hydrocarbon reserves.

India has to keep nurturing its Caribbean ties and has to rise up to the challenge that the COVID-19 has posed and what Dookeran has correctly speculated for the Caribbean economies. In reality, it is an opportunity for India to assert its national leadership yet again in that region and bring India close to the heart of every inhabitant in the Caribbean.

India should rush with the supportive drugs and medical care to the island nations; should announce a fresh package of credit and economic aid; convene another round of high-level meet/teleconference with the Caribbean Community so that the strategic ties are reinforced at both ends.

Sushma Swaraj, India’s former Minister of External Affairs had said in India-CARICOM Foreign Affairs Meet in 2015, “We have also been offering concessional financial credit to some CARICOM countries for projects in sectors such as irrigation, drinking water, infrastructure, agriculture and renewable energy. We would be happy to extend such soft loans to other countries in CARICOM as well. It will not only bring us closer but enhance our links and further strengthen our political, economic and people-to-people ties.” In the Indo-CARICOM Leaders’ Meet in 2019, Prime Minister Narendra Modi has repeated that such meets would “take forward our vibrant South-South cooperation and partnership” with the Caribbean nations.

One the one hand, the Coronavirus crisis is on its way to cause devastating consequences in the Caribbean where travel and tourism is the mainstay of the economies. On the other side, lockdown, isolation and social distancing as anti-COVID-19 measures are like a culture shock for the Caribbean where people greet each other by friendly hugging and shaking hands. India’s material steps with a Namaste greeting would contribute towards the civic spirit in the Caribbean and would bring good wishes back to India that the Indian nation too needs in abundance at this moment.

Dr Ujjwal Rabidas is an Assistant Professor at Amity University, Noida., India. He can be reached at latinujjwal@gmail.com