Sino-Russia Relations – Then and Now 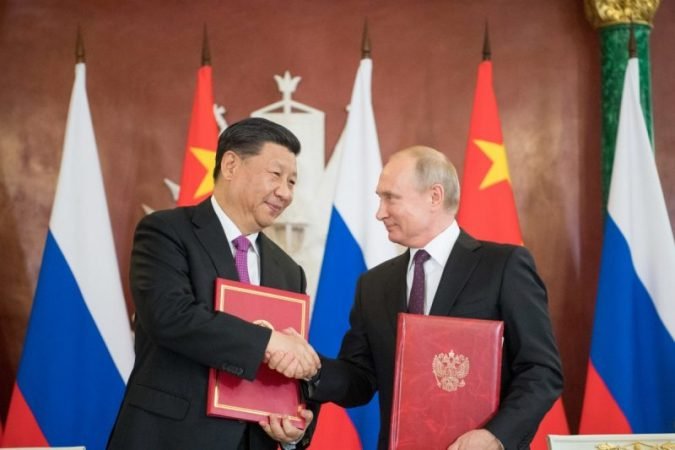 Stalin and Mao once signed a Treaty of Friendship, Alliance, and Mutual assistance way back in 1949. It is not a hidden thing that the Stalinist model has been inherited time and again by Beijing whether to fund industrial growth or adopting methods like Collectivization. No doubt, the two countries share a past along with an affiliation to a common ideology. But it saw rifts between Mao and Khrushchev in the year 1957 because of their difference in approach towards dealing with the West. However, situations improved by 1985. Gorbachev introduced policies like Perestroika (economic restructuring) and Glasnost (political freedom) with the collapse of the Soviet Union. After, the collapse of the Soviet Union, Both China and Russia got into a relationship of ‘comfortable compromise’ where both were opposed to America as a hegemon. This new equation lacked the ideological affiliation shared by the two in the past but no doubt it was an alliance where both the countries agreed to disagree with each other which was absent earlier. Post-Cold war, new actors emerged in the foreign policy decision making of China.

Similarly, Russia’s foreign policy approach also saw a drastic change with a change in leadership from Boris Yeltsin to Vladimir Putin. In the year 1999, China was approached by Russian PM Yevgeny Primakov to include India and form a ‘strategic triangle’ to challenge the United States. Both the countries called for ‘multi-polar’ world order and were miffed with the United States for its anti-ballistic missile plans and invasion of Iraq. In fact, the Shanghai Cooperation Organization (SCO) was announced in the year 2001 as a mechanism to oppose intervention in other countries under the garb of humanitarianism. It is also known as ‘Alliance of the East’. SCO is known for its statements directing the United States to withdraw its troops from Central Asia. Thus, the most basic idea behind the Russia- China alliance was strong opposition to the United States. However, the eminent elites in the Russian academia have always warned Russia to beware of China too. Egor Gaidar, an intellectual from Russia had predicted it way before that China will be Russia’s biggest competitor in the 21st Century. So, Russia should also deploy forces in the east. This has actually turned out to be true today. China’s rise is hindering opportunities for Russia in the Central Asian region. Beijing is gradually challenging Russia’s interest in the region which is known for its Russian sphere of influence.

China- Russia cooperation is also driven by the idea of Waltzian Neo-Realism. According to Kenneth Waltz, in the anarchic world order, States are governed by Security Dilemmas and the reason for their cooperation (China- Russia here) is resistance against the United States. But this is also true that China and Russia have never made efforts on their part for a military alliance though they have conducted a lot of Joint military exercises. Another possible interpretation for the alignment of the Russia- China despite huge disparities in their power is Deterrence. According to Neo- Realists like John Mearsheimer, Jervis- Nuclear Weapons do act as a deterrent against wars. The fact that Russia is a nuclear power hinders China from using conventional arms against it despite the differences in the state capacities.

China became Russia’s largest trading partner in the year 2012 with a bilateral trade volume of $88.2 billion. And the most important component which is being exported to china is Russia’s energy. China is both world’s largest importer as well as consumer of oil. Many of Russia’s undeveloped hydrocarbons share geographical proximity with China. Thus, both countries are complementary to each other when it comes to energy exchange.

It is also to be noted that even Belief systems do play an important role in shaping a country’s foreign policy. Both Russia’s and China’s alliance can be seen as a common belief of aversion to the western style of democratic government. Both countries core spiritual values are inconsistent with the ideas of the West.

However, with the onslaught of the Covid19 pandemic, the world order is more likely to change. It would be interesting to see where Russia- China relations will stand post Covid19. With news of accusations against Russia for conducting cyberattacks in the UK against those developing the Corona Virus vaccines. Beijing has come out openly in support of Moscow. It has asked to stop accusing any country without any proper evidence.

It is also to be noted that Russia has recently halted the delivery of S 400 missile defence systems to China. These missiles can destroy targets at a distance of up to 400 kilometres and a height of up to 30 kilometres. The deal was signed in the year 2014 and the first S-400 was sent to China in the year 2018. The supply has been postponed because the President of St. Petersburg Arctic Social Sciences Academy, Valery Mitko has been accused of being hand in glove with the Chinese authorities to keep an eye on Russia. However, this has been rubbished by China citing it as rumours. This brings India into an advantageous position.

But the question arises here, Is the distancing by Moscow from Beijing is temporary? Of course, it is. Russia cannot afford to lose allies like China. It is constantly in search of its new crude export destinations. India, being one and is one of the most reliable partners of Moscow but Russia is heavily dependent on China. It shares a positive and favourable trade balance with China and losing China will only harm Russia in its long-term interests. Meanwhile, both Xi and Putin have urged other countries to not politicize the pandemic as it would disrupt the cooperation between the countries. Earlier, this month both Putin and Xi committed towards a common goal of boosting economic cooperation along with energy and civilian aircraft manufacturing keeping in mind the shared interests of both Moscow and Beijing. Now, only times will decide their position post the global pandemic.

Dueben, Bjoem Alexander (2013), China- Russia Relations after the Cold War: The Process of Institution- Building and its impact on the Evolution of a Bilateral- Cooperation, The London School of Economics and Political Science.