Beirut Blast- What does India have to say about the tragedy? 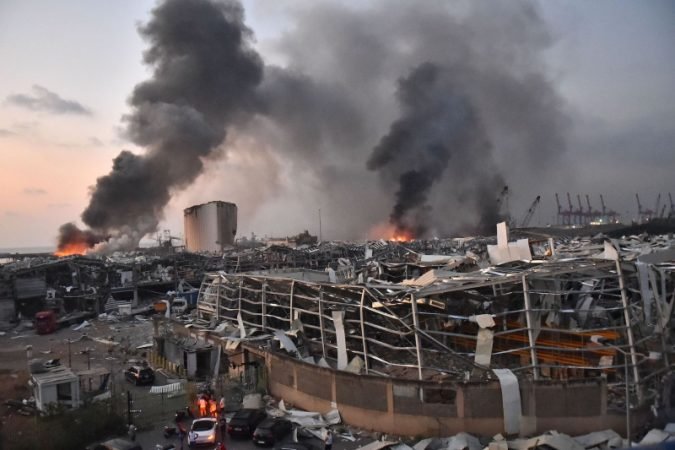 TOPSHOT - EDITORS NOTE: Graphic content / This picture taken on August 4, 2020 shows a general view of the scene of an explosion at the port of Lebanon's capital Beirut. - Two huge explosion rocked the Lebanese capital Beirut, wounding dozens of people, shaking buildings and sending huge plumes of smoke billowing into the sky. Lebanese media carried images of people trapped under rubble, some bloodied, after the massive explosions, the cause of which was not immediately known. (Photo by STR / AFP) (Photo by STR/AFP via Getty Images)
PDF Button

Being one of the most devastating tragedies in the history of Lebanon, the twin blasts in Beirut has brought the world to its knees. The blasts that occurred in the evening of 4th August, killed more than 100 people and left a lot many injured. Various reports suggested that the impact of the blasts could be felt from as far as 150 miles from Central Beirut. The Port Silos of Beirut, being the epicentre of the catastrophe was entirely covered in debris and broken metal pieces all-around within a few minutes into the blasts. Seismologists measured a 3.3 magnitude wave on the Richter scale during the blasts, which clearly indicates the effect of the blasts on the infrastructure in and around Beirut.

Between all this Chaos, the Indian Embassy in Beirut was immediately contacted by the Ministry of External Affairs to take cognizance of the situation and acquire information on the number of Indian casualties in the blasts. Later in the day, the Indian envoy to Beirut Ambassador Suhel Ajaz Khan released a statement saying that all the members working at the Embassy were safe and that the Indian community in Beirut was actively being traced and contacted to assess if there were any deaths or injured people. Along with tracking them, the Embassy has also released a helpline number for any Indian to reach out for help and assistance. A strong community of around 9,000 Indians exists in Beirut and they have been requested to stay afloat and vigilant for the next few days. Prime Minister Narendra Modi also tweeted giving condolences to the families who lost their loved ones and expressed his displeasure with the situation. A notice released at the end of the day stated that there was no Indian casualty from the blasts and everyone was keeping safe.

The bilateral relations between India and Beirut go back to 1954 and have shared friendly relations since then. The two countries connect on multiple fronts including a democratically elected government which follows a written constitution, an aspiring cult of entrepreneurship, a mixed economy focussed on growth and the freedom of citizens. Lebanon and India have been involved in multiple Quick Impact projects and various technological programmes. A flourishing trade between them is a result of the shared sense of thinking and mutually beneficial trade agreements.

Disheartening and dramatic visuals surfaced the social media displaying the ravaged neighbourhoods filled with shattered glass pieces and debris from the flattened buildings around. The biggest contrast here is that the extravagant celebrations of the Ram Mandir in Ayodhya, which according to the people reflected hope and faith, took place when the whole world was mourning for the victims of the explosion. It seemed that the loss of livelihoods of many, which may be of permanent nature was trivialised by grandly cheering for the building of the temple.

The cause of the explosion is still not very clear though some officials admitted that the irresponsible and unregulated accumulation of explosive materials including Ammonium Nitrate in the docks for nearly 6 years is what caused the sudden blasts. Life in the capital of Lebanon is still wary due to the heavy damage caused to buildings, vehicles and other infrastructural facilities making it impossible for people to push themselves out of the wreckage. The death toll has now risen to 135 and time will tell how the country will cope up with this catastrophe.