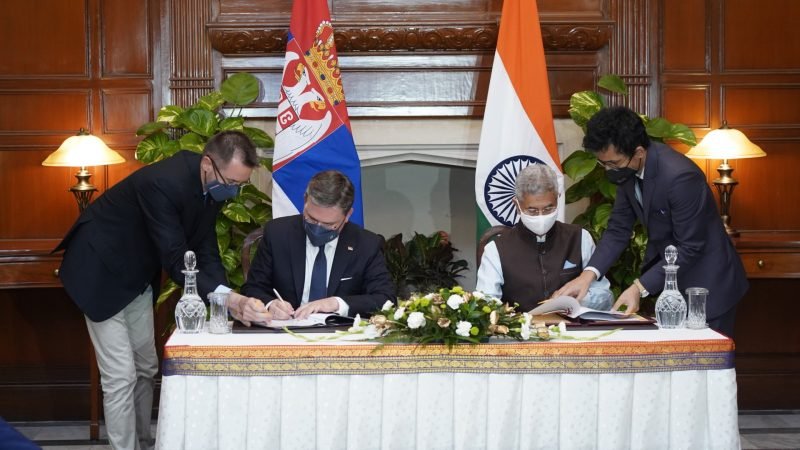 India and Serbia have had a strong and close friendship that was leveraged in the past few years through the foundation of high-level visits by the Vice President of India in Serbia in 2018 and Prime Minister of Serbia in India in 2017.

The lecture aimed at strengthening the bilateral ties to combat all forms of terrorism and how as co-founders of the Non-Aligned Movement, both the countries have shared cooperation in every political area of deep national and international interests ever since its inception.

Serbian Foreign Minister, in his keynote address, spoke about the challenging period when he took over the office of the Serbian Ambassador to India. With the Covid-19 being on the peak, the Serbian Ambassador found a home under the Indian skies. He emphasized that the essence of Indian Serbian friendship is only separated through physical distance. Both these countries operate on the same principles of traditions, history, and love for freedom. He briefly stated the mission and vision of Serbia’s foreign minister’s visit to India. To uphold the progress of solid communication, sharing standard views of deep-seated national & global interests, and promoting brotherhood were the key objectives were focused on while preparing the foreign minister’s visit to Indian territory. He concluded his speech by remarking that India and Serbia should keep each other closer to their hearts.

Mr Selaković, recalled his time teaching legal history in Belgrade while stressing upon the outstanding leadership emerging from the Indian subcontinent for ages. India and Serbia had one of the longest-running co-operation traditions exhibited by common characteristics of freedom-loving nations. Sixty years ago, the founding fathers of the Non-Aligned Movement met in Belgrade to define for the first time the wisdom in searching a different path altogether, without supporting either of two world blocs. Serbia, a successor state of the former Yugoslavia, was diving deep to retain its statehood in the best possible manner for the upcoming years. This year, on October 11th and 12th Serbia, plans to hold a commemorative session that marks the sixth decade of NAM. Serbia has been devoted to expressing its interest in becoming part of the European Union while maintaining its military neutral nation. Serbia is not aiming to become part of the NATO alliance but is dedicated to preserving its multi-bacterial foreign policy.

Mr Selaković also stressed the need to improve bilateral relations between these two nations while giving hindsight about Serbia’s economy. Despite the Covid 19 Pandemic, Serbia attracted sixty-one percent of Direct Foreign Investments. Serbia is also the first country in the region to implement the necessity of Informatics as a mandatory subject as part of the elementary schooling curriculum. Two friendly nations should thereby help each other exchange information that is crucial in maintaining the stability of all forms in the region. People to People connectivity and communication should be stressed more either in the state of the tourism industry, research, educational scope, job opportunities, or exchange of ideas and thought processes to enhance the cordial relationship between the two economies.

Many important events in southeastern Europe are determining the recent fate of geopolitics in Europe. Belgrade respects and supports New Delhi in all ways to defend its position against state-sponsored terrorism in the South Asian region and will continue to do so, as both the nations share common goals, values, and principle devotion of democracy. There is a great need to survey, review and analyze what all India-Serbia relations have achieved and to lay the framework for prospects of this bilateral relation.