Explainer: What to watch for in Japan’s leadership vote Wednesday 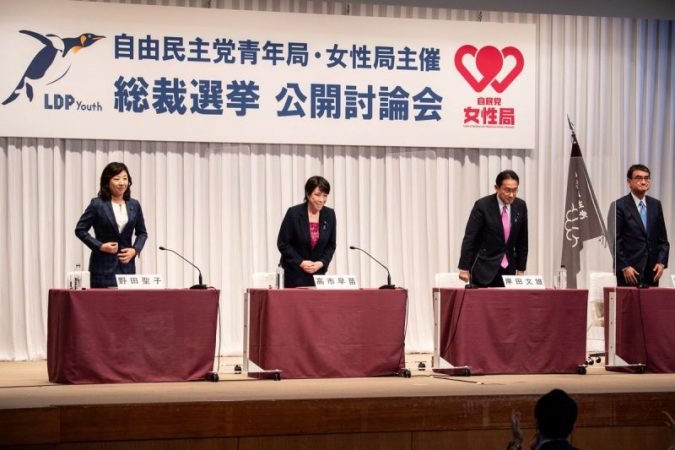 Japan’s ruling party votes for a new leader on Wednesday in an unusually unpredictable tussle that will essentially decide the next prime minister of the world’s third largest economy.

Four candidates are in the running to lead the Liberal Democratic Party, including the popular vaccine minister Taro Kono, 58, and the centrist ex-foreign minister Fumio Kishida. Two women will also historically vie for the top job, including the ultra-conservative Sanae Takaichi, 60, and Seiko Noda, 61, from the party’s dwindling liberal wing.

Here’s what to watch for on Wednesday:

The first round of voting begins at 1 p.m. Japan time and results will be announced at 2:20 p.m.

Kono, a social media friendly maverick who has shaken up the world of staid Japanese politics, is favored to win the most votes. However, projections show him failing to win the 383 votes needed for a majority.

That means the top two candidates will immediately go into a run-off vote in which the winner needs to secure 215 votes out of a total of 429 available, of which 382 are cast by lawmakers who voted in the first round and another 47 by local chapters.

In the runoff scenario, some projections favor Kishida because of the way that more conservative factions may vote to block Kono.

That said, if Takaichi is voted into second place, factional voting to block Kono could see her pull off an upset and come out on top in the second round.

In the last leadership tussle a decade ago, then prime minister Shinzo Abe lost the first round of voting, but won the second.

The results of the second round of voting are expected about 3:40 p.m. after market close.