Sino-Russian Alliance against the United States 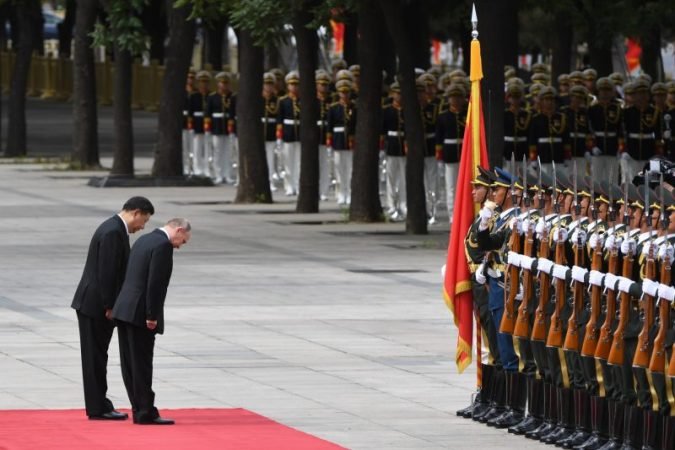 In a response to Trump’s proposal to expand G7 grouping to G11, by inviting Russia, India, Australia and South Korea, Russian foreign ministry spokesperson, Maria Zakharova said “the proposal to expand G7 is in the right direction but will fail to provide a truly universal representation. It’s hardly possible to implement serious undertakings of global significance without China’s participation”. Time and again Russia has reiterated that in a global confrontation between Washington and Beijing, Moscow will not allow itself to be a card at either’s disposal. But the geopolitical contestation, economic sanctions and increasing US unilateralism is forcing both these former communist nations to enhance greater complementarities amidst great power politics.

After the end of the Second World War in 1945 and civil war in China in 1949, the People’s Republic of China (PRC) came into being as a new entrant in the communist bloc. Under the leadership of Mao Zedong China undertook to re-organise its Socio-Political structure strictly on the lines of the core of communism.

In 1950, China and Russia signed a Treaty of Friendship and alliance and mutual assistance but it ran into trouble just 6 years later owing to ideological differences on fundamentals of communism. Nikita Khrushchev’s leaked speech of 1956 titled ‘On the cult of personality and its consequences’, in which he denounced Stalin’s confrontationist posture against the west and advocated coexistence with the west, led Mao to part his ideological journey with Russia because Mao had emulated Stalinism in PRC which he retained although with Chinese character.

USSR’s rapprochement towards the United States in the form of détente, Moscow siding with India in Sino- Indian War 1962 and USSR’s withdrawal of technical aid to Chinese Project 596 (Chinese Atomic Bomb) led to further deterioration of relations. The void created by the difference in interpretation and application of Marxism – Leninism finally led to a full-scale Sino-Soviet border war in 1969. Recognising this as a propitious moment, US the then National Security Advisor, Henry Kissinger embarked Sino- American rapprochement by paying a secret visit to China in 1971 for arrangements for the first State visit of US President Richard Nixon to PRC.

The end of the cold war, the disintegration of USSR and two decades down the line, Chinese resurgence has prompted scholars to contemplate the international politics as cold war 2.O where China and USA is battling against each other. It is quite imperative from this perspective for old and new Cold war rivals to join against a common enemy. In order to examine such an alliance, this article contemplates the stakes involved for both Russia and China in countering the USA.

China is, currently, involved in great power competition against the USA. They have not only put forth their global ambition of making Beijing the centre of the global political and economic landscape but are aggressively pursuing it. Militarily, China’s defence budget for 2020 is $179 billion while the USA’s defence budget was $732 billion. In terms of airpower, the USA is far ahead with around 13264 aircraft while China has 3210 aircraft. In terms of naval power, China has 2 aircraft carriers as compared to 20 aircraft carriers of the USA. With respect to nuclear warheads, China has estimated 290 warheads as compared to USA’s almost 6200 warheads. As Chinese are involved aggressively in the South China Sea which also has a security cover of USA, Russian alliance could possibly strengthen Chinese resolve to against USA’s might. With US unilateral moves and the secondary sanctions, doing its round, those impacted in general and US rivals (Russia and Iran) in particular, are finding window at Chinese door. The USA imposed sanction in 2018 on Chinese military department and its officials for purchasing Russian Su-35 combat aircraft and equipment related to S-400 Surface –to- Air missile system from Russia which was sanctioned for their action in Ukraine and alleged meddling in USA Presidential election 2016. Chinese Ministry of Defence denounced the sanction as ‘a flagrant breach of basic rules of international relations’ and ‘a stark show of hegemonism.’ Very recently, due to US policy of maximum pressure (sanction) on Iran and subsequent economic apathy, China has brokered a $400 billion strategic partnership for strengthening economic and security ties for 25 years. Last year China and Russia inaugurated ‘Power of Siberia’ gas pipeline from Russian far-east to china in order to meet the energy requirements. All these steps are forging greater complementarities between Beijing and Moscow and hence, the complex interdependence.

For Russia, alliance with Beijing is a boon in itself because of ever-increasing Chinese global stature politically, economically, technologically and militarily. Moreover, China is least deterred by the US sanctions as compared to others like India, Europe etc. This comes handy when US domestic laws like CAATSA is taken into consideration. Alliance with China also ensures its leverage over contentious regional and global issues like the Afghan Peace Process, a greater role in Central Asian Affairs. Last year China and Russia upgraded their relationship to the Comprehensive Strategic Partnership of Coordination for a new era. President Xi was quoted saying ‘China-Russia relationship is seeing a continuous, steady and sound development at a high level, and is at its best in history’. Although Russia has been denying any alliance in the great power rivalry, their actions and the option available to them especially under sanctions indicate there would be considerable attempts from the Russian side to forge a strengthened relationship with China. A Russian high official, Konstantin Zatulin was quoted saying “the actions of United States are pushing us together.”

USA has already conveyed that it is not going to extend New Start Treaty, an arms control treaty between the USA and Russia, which is set to expire in 2021. Moscow has categorically denied US demand from Moscow to persuade China to be a part of the treaty in order to make the treaty alive. Strategically, regional groupings like SCO and RIC sets in place a structural strategic framework based specifically on reducing security dependence on the USA. Established in the 1990s, RIC (Russia India China) is a strategic grouping aim at counterbalancing Western alliance. But India’s reluctance towards projecting any ganging up against the US is detrimental to India’s own interest. Moreover, India is also in the midst of Chinese belligerent attitude at LAC. Hence, RIC as a probable alliance against the USA is far from realising. Shanghai Cooperation Organisation (SCO) is another grouping which brings Russia and China together. The regional Anti- Terrorist Structure (RATS), a structure within SCO grouping, can also be leveraged to forge greater defence cooperation.

Economically, China has been establishing an alternative financial structure completely independent of Western dominance like WTO and IMF have. Through these financial institutions, which has major financial and management control with China, she is seeking to establish regional and global (to some extent) economic landscape centred upon China. Chinese dominated Asian Infrastructure and Investment Bank (AIIB), a multilateral development bank with 102 members, 87 approved projects and almost $ 20 billion in Asia and beyond, has posed itself to challenge western dominated Britton Woods Twins. New Development Bank, established through the joint initiative of BRICS (includes China and Russia) nations is also aimed at reducing the dependence of western dominated global financial architecture. Above all Chinese ambitious Belt and Road Initiative (BRI) is an umbrella project that would subsume both economic and defence power projection in the region and beyond making nations highly indebted and entangled with a Chinese world view. In order to deter the western high headedness and regain the historical glory of Asian civilisation (rise/ return of Asia as Joseph Nye says), an alliance between Russia, a former superpower and China, a superpower (at present) seems inevitable.

Russia may have lost its former clout in the region and beyond owing to the breakdown of Soviet system but there’s no denying of the fact that 99% of nuclear stockpile are still held with Russia and USA together. Russia stands against USA eyeball to eyeball at several theatres such as the Syrian crisis, Ukraine Crisis, North Korea issue etc. Militarily, perhaps the only country which can challenge the USA is Russia and Russia has also flexed this leverage time and again (nuclear threat on the annexation of Crimea). Russia and China have also been constantly playing together at UNSC as a permanent member, vetoing resolutions detrimental to their interest. Very recently China and Russia vetoed a resolution from its adoption at UNSC for cross border humanitarian aid from Turkey to Syria saying west to first withdraw all their sanctions against Syria which according to them is the cause of the humanitarian crisis.

Hence, Sino-Russian Alliance against the USA, especially in times when Trump administration is hell-bent on unilaterally violating all quotes of the western alliance, would prove to be a long-lasting strategy to alter century-old west domination at International politico-economic landscape.