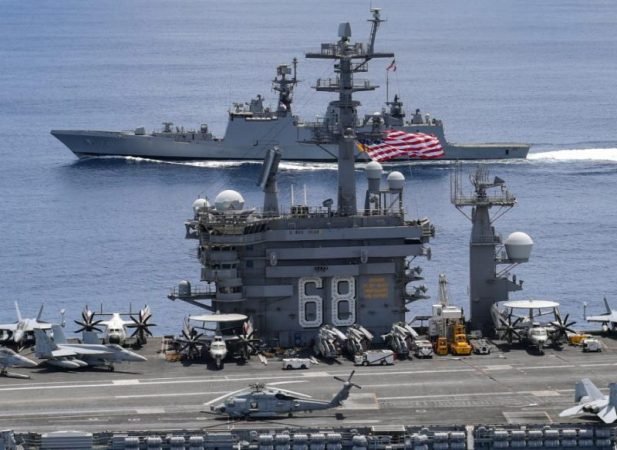 India and the USA recently concluded a PASSEX (Passing exercise) near Andaman and Nicobar Island. This exercise at the Indian Ocean happens at the time of India-China standoff at eastern Ladakh. This article will focus on the implication of this naval exercise in the Indian Ocean region, especially near Malacca Strait.

On 20 July 2020, the US carrier strike group led by the aircraft carrier USS Nimitz conducted a “cooperative” exercise with the Indian warship in the Indian Ocean region. The military exercise can send a powerful signal of understanding, deterrence, and resolve depending upon the nature, scope, and location of the exercise. This exercise between the two nations is termed as ‘PASSEX‘ as the mammoth nuclear powered USS Nimitz and accompanying three warships were passing through the Indian Ocean region after completing the “freedom of navigation” operation in the South China Sea. This “freedom of navigation” was a signal to expansionist and aggressive china to keep its ‘salami-slicing’ tactics, aimed at nibbling the neighbouring Territory, in check. General Bipin Rawat during ‘Doklam standoff’ in 2017 mentioned these tactics of China, denoting its strategy of territorial expansion at the South China Sea and the Himalayan regions. ‘Salami slicing’ is a strategy coined by Hungarian communist politician Matyas Rakosi during the 1940s to describe the strategy of non-communist parties. In Military parlance, ‘salami-slicing’ is also known as ‘Cabbage strategy.’

China is an astute player in such a strategy, where it gains the Territory without even firing a bullet. China has developed such courage over the period because of the US’s poor foreign policy. In his remark, American national security advisor Robert O’Brien mentioned that American believes that huge investment and interdependence of the economy will convert communist China into democratic. They believe that as China will grow richer and stronger, the Chinese communist party would liberalize to meet its people’s rising democratic aspiration. However, with economic growth, the Chinese communist party consolidated its power to a greater extent. CCP owns several mouthpiece and media houses, which keeps its propaganda afloat. Also, the US kept a blind eye on China’s annexation of Tibet and then keeping a soft attitude towards China’s south china sea policy had made china a expansionist and aggressive. He also argued that the Trump administration’s biggest achievement is that it shows the world the real face of China.

Igniting the trade war and, at the same time, leaving the international platform, which became the mouthpiece of China, was the initial step in the direction. Thus, showing power and strength in the Asia-Pacific is the extension of that policy only. The US indicates the littoral state to stand firmly against Chinese aggression in the South China Sea. The US tries to send messages to Beijing that the US stands committed to defending the sovereignty, integrity, and the interest of its Allies in the region. Incidentally, for the first time, the American aircraft carriers, USS Ronald Reagan and USS Theodore Roosevelt, along with the USS Nimitz, were deployed in the Pacific Ocean. During the operation, the USS Ralph Johnson, an Arleigh Burke-class guided-missile destroyer, sailed within the 12 nautical miles of Cuarteron Reef and Fiery Cross reef near Spratly Island in the South China Sea.

US secretary of state Mike Pompeo Stated that “the US position on the South China Sea is going to be more aligned with the finding of an international tribunal in 2016 in the Philippines,2013 case against China”. It indicates that the United States rejects any PRC maritime claim in the waters of Vanguard Bank, Luconia Shoals, and Natuna Besar or Brunei’s EEZ. USS Nimitz, along with the Ticonderoga-class guided-missile cruiser USS Princeton, the missile destroyer USS Sterett and USS Ralph Johnson, participated in what the US described as a “cooperative exercise” with Indian destroyer INS Rana, stealth fighter INS Sahyadri and INS Shivalik and missile corvette Kamorta. The exercise in The South China Sea and the Indian Ocean region is designed to support “a free and open Indo-Pacific and promoting rule-based international trade wherein each country can reach its potential without sacrificing national sovereignty.”

For India, it is not just about protecting the trade route but also about its leverage to de-escalate at the northern border. India displayed the intent by deploying a half squadron of maritime fighter aircraft ‘Jaguar’ at Car Nicobar airbase. The Indian air force has also raised its guard along the northern border to deal with any misadventure or provocation by Chinese forces. Interestingly, this exercise is happing at the crucial phase when both hostile nations, i.e., India and China, are de-escalating their forces after the long and bloody standoff that killed soldiers from both sides four-decade. The ‘PASSEX’ that recently conclude indicates that both the nation do not want to lose any opportunity to counter the Chinese hegemonic approach in the region.

Although, both the nation are engaged in regular bilateral and multilateral exercise ‘Yudh Abhiyas’ and ‘Malabar’ respectively. This exercise is unique as it was quick and agile in its approach. The growing aggressive nature of China, especially after the Covid-19 pandemic, brings the largest and the oldest democracy of the world much closer than ever before. Further, Now India will not hesitate to invite Australia to participate in ‘Malabar’ multilateral naval exercise in the Indo-Pacific Ocean. India has opposed the Australian entry multiple times, as later has pulled out itself after participating in the initial one. Further, Australia, which was the weakest link a decade age in ‘Quad grouping,’ is one of the strongest supporters. Further, India also concluded a short ‘PASSEX’ with Japan last month. The Indian warship Rajput-class destroyer INS Rana and Kora-class missile corvette INS Kulish patrolling the Malacca strait region took part in the exercise with JS Shimayuki and JS Kashima from Japanese Maritime self-defence forces training squadron. It indicates the colliding interests of the ‘Quad’ nations in the region.

These colliding interests of the ‘Quad’ nation will further push to covert this group from informal to a formal one. Further, if we look at the situation from an Indian perspective, it can be utilized to solve the border dispute with China. Currently, the Indian economy is one-fourth of china, and our military strength lies far behind that of China. However, the role of geography cannot be ruled out; it still sharply favours India. First, China cannot thrust its army though the northern border as the mighty Himalayas as the natural defenders. Second, India owns the commanding position in the Indian Ocean region with its tri-service base at the Andaman & Nicobar Island, not far from the crucial ‘Malacca strait.’ China’s export-driven economy is very much dependent on this strait. With its ‘Act East’ policy, India is in good terms with the ASEAN nation, and with American interest in the region, it became a favourable ground for Indian diplomats and policymakers to manoeuvre their skills to gain Indian interest. For India, the growing military engagement with the US comes with both opportunity and risk.

However, looking at the current perspective and situation, the risk is worth taking. The intentions of the PRC became clear after the Galwan valley incident. The mighty dragon is waiting for another 1962 like situation, and the appeasement policy toward china will not work in Indian interests. Thus, the policy against china needs a paradigm shift. The US has a clear interest in ensuring that India can look after its security needs in a challenging neighbourhood. India, apart from China and Pakistan tension, is facing a range of security challenges in its immediate neighbour and beyond. Nepal, Sri Lanka, Maldives, and even Bangladesh is a possible security threat in the region. However, the current relationship with the US is not that of the zero-sum game. Our relationship with the US by no means can be perceived to tackle china.  India’s relation with the US is a strategic one, but with china, our relationship is more economical. Ironically, we do not have a land border with the US but share a 3488 km long unsettled boundary with the dragon.

Despite all the dispute and anti- china sentiment, New Delhi remains wary of establishing any formal alliance with the USA. Any formal alliance with the US can result in developing a more complex geopolitical scenario in the region. Firstly, it can solidify the Russia-China-Pakistan Nexus to a great extent, and India can lose its interest in a country like Iran and Afghanistan. Second, India will be a mere protector of the US interest in the region and will lose its independence in balancing the tight relationship with the hostile nation.

The Indo-Pacific situation is not going to be calm in the coming year. The growing and expansionist china will push all gear to race for China-based world order. It will compromise the national interest of both India and the US in the region. The US interest lies in militarily strong India opposing Chinese hegemony in the region. At the same time, Indian interest lies in the presence of global power to balance the expansionist approach of china beyond the Indian Territory. The exercise recently concluded aptly indicates the confluence of interest and growing proximity between both the democracies. The sole standout posture of the exercise remains the intent of both the nation, especially India. India though racing hard to match the china’s arsenal, still lags far behind. Thus, the presence of US interest not only checks China’s aggression but also develop confidence among small countries to stand against the Chinese might. Thus, instead of launching a formal alliance, we can move closer to the treaty of understanding and mutual benefit. The formal alliance will not only undermine India’s other geopolitical interest but will make China more assertive. Although India is capable of safeguarding its territorial integrity, it needs US support in regulating China’s assertiveness in the South China Sea and the Indian Ocean region.