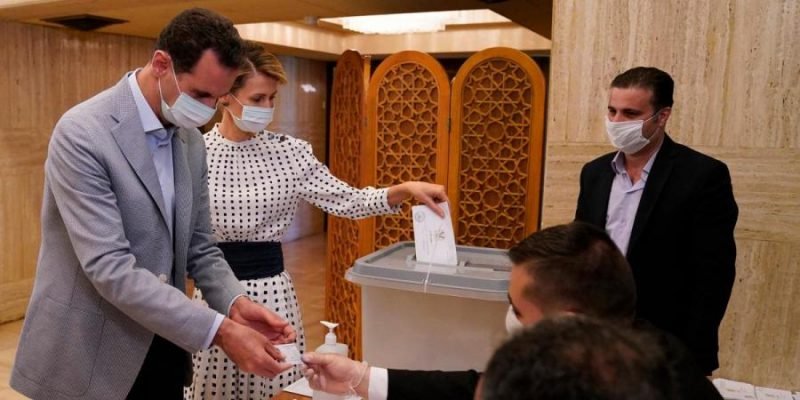 The Syrian Arab Republic held parliamentary elections on Sunday, 19 July 2020. For the first time since the beginning of the civil war in 2011, polls were conducted in the areas that were formerly under the control of the opposition. Around 2100 candidates contested for just 250 seats in 15 constituencies that have more than one seat each for which more than 7000 polling stations were set up. According to media reports, Sunday’s election witnessed high voter turn-out that the voting hours had to be extended. Some of the 2100 candidates are among the businessmen who were sanctioned under the new Caesar Act imposed by the United States. This parliamentary election, the third since 2011, was initially planned to happen in April but was postponed twice due to the impact of the early stages of the pandemic.

The Syrian government’s decision to anyway go ahead with the elections in the middle of the coronavirus crisis and fresh U.S. sanctions shows President Bashar al-Assad’s desperation to reemphasise that he still holds on to power despite external pressure on the government. Moreover, the way in which this election is conducted seems to be flawed in all its sense. Firstly, all the candidates were pre-approved by the government. Secondly, most of the candidates are either close allies of the Ba’ath party or are associated with President Assad. It is the Syrian normal that only those who portray themselves as being loyal to President Assad stand a chance to be a part of the state’s political system. Finally, the total voter population excluded Syrians who live abroad and a humongous number of refugees who fled Syria. The remaining Syrian nationals have cast their vote in the hope that their living conditions will ameliorate in the coming months. Syria’s economy has been deteriorating and the value of the Syrian pound has plunged heavily, in turn, shooting up the cost of living in the country.

The opposition cried foul at the candidates and their Ba’ath Party connections. The Turkey-based Syrian National Coalition termed it a “theatrical election by the Assad regime”. On the other hand, the Syrian Prime Minister Hussein Arnous declared, “Today is a political victory that is added to the military victories”. Analysts opine that victory for Assad is guaranteed and the road for him to continue as President is clear. President Assad clung to power for 20 years now and he has made himself the centre of Syrian politics. Iran and Russia have also been supporting his government to realise their respective strategic designs in Syria.

Moscow would like to have a friendly face in Damascus to protect its strategic infrastructure. Russia has an airbase in Latakia and a port in Tartus, both holding significance to Russian military influence in the region. Russia has given diplomatic and military backing to the Assad regime, especially since 2015. For Iran, Syria is important because it needs a strong ally in the region to resist its rivals, Saudi Arabia and Israel. Iran also uses Syria as a transit corridor to supply arms and training to the Hezbollah, which has also constantly voiced their support of Assad’s regime. Over the years, Iran has deployed its elite IRGC troops and its weapons as well as provided huge lines of credit to build up the Syrian military capability.

Against such regional and domestic backdrop, it is clear that President Assad is all set to welcome his next Presidency tenure. But this does not solve the political and economic issues Syria has been mired in. The civil war has tattered Syrian society and pushed its citizens out of the country. The economy is facing the brunt of twin problems: the Caesar Syria Civilian Protection Act (that sanctions the current Syrian government and businesses connected to it for the war crimes committed against the Syrian population) and the coronavirus crisis. While the Caesar Act claims to seek justice for the affected Syrians, the way it is choking the country’s economy has only increased the burden laid on the population.

Syria’s repressive government has snatched the political voices and civil liberties of the citizens. The recent elections seem to be nothing but an eyewash that President Assad has planned to use to incentivise his supporters and contain the public dissatisfaction. Ultimately, it is the Syrian population that suffers the ripple effects.