A détente in sight? US-China relations under a Biden presidency 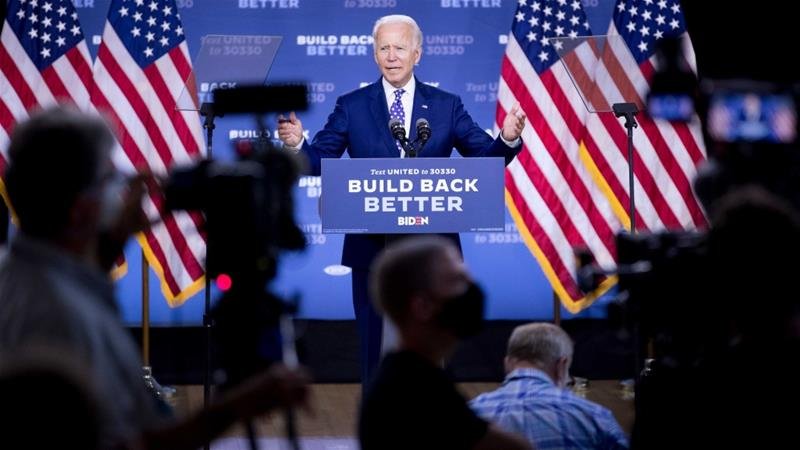 After a promising start this year, US-China relations have soared In the past few months. Joe Biden, the Democratic candidate looks more likely to win the 2020 presidential elections as the incumbent president of the United States, Donald Trump trails far behind him and has less chance of winning the elections probably due to his unresponsiveness following the COVID-19 outbreak that has seriously dented his image in America and abroad.

The victory of Joe Biden would see changes in the domestic and foreign policy of the United States. Although Mr Biden would not in a go be able to ease out the tensions between the two superpowers of the world that have reached alarming proportions in 2020 especially amid the trade disputes, COVID- 19 pandemic, China’s claim over the South China Sea, the new security law that was slapped on Hong Kong, human rights abuses committed by the members of the Chinese Communist Party against the  Uighurs. Mr Trump particularly is irked by Beijing’s growing prowess and that has seen him hurl accusations and target Beijing every single time. The rivalry between the US and China will look different under Biden’s presidency.

To have a deeper understanding of how US and China relations will look like under Joe Biden, The Kootneeti participated in a webinar discussion on A Détente insight: US-China relations under a Biden presidency organised by The Economist Intelligence Unit.

EIU believes that there are little chances of improvement in relations between the US and China. It is expected that Mr Biden would work to increase US engagement in foreign affairs, unlike President Trump. Tensions have arisen in areas other than technology as US imposed sanctions on some Chinese officials for the gross human rights violations committed by them against the Uighurs, added eleven Chinese companies in the US Commerce Department’s blacklist and the US even took a strong stance against China’s growing territorial ambitions. The conflict would remain the same as the two countries are competitors, a view that is held high in both countries.

Mr Biden can possibly focus on addressing economic and trade imbalances and pay more attention to human rights and security. An issue of cooperation i.e. Environmental Protection can prevent the ties between the two countries from further weakening. Like Mr Trump, Mr Biden sees China as a threat to US industry. Mr Biden’s economic revival plan includes ways to combat Chinese trade policies including surplus production and dumping, state subsidies etc. Tariffs have been considered a blunt tool in trade talks so far between the two countries. It is expected that Mr Biden can be softer in easing the tariffs particularly on those Chinese goods that are hard to be replaced. Mr Biden claims to achieve self-sufficiency in The production of critical supplies as personal protective equipment. Mr Biden has promised aggressive trade enforcement actions against unfair trade practises and has even promised to encourage more US-based manufacturing. Mr Biden would attempt to build a coalition of allies in Asia Pacific and Europe in order to magnify their strength vis a vis China.

Engagement with the allies to increase the impact on strategic issues is also expected. Jake Sullivan, a key Biden adviser has proposed a competition without catastrophe approach to China. The US faces an uphill task to rebuild ties with Asian countries that have already grown closer to China. Tensions with China are running high over China’s claim over the South China Sea and over the prospect that Taiwan can be the next Hong Kong. These issues will not be a top priority of the former Vice President in the initial year as the fallout as a result of COVID- 19 will draw attention more than anything else. The collision of like-minded allies to counter China might be difficult for countries that have territorial disputes with China especially given their feeble military strength when compared to China. US’s NATO allies might refuse to directly enter into a conflict with the China and severe important ties with China. Their policies would focus on post-pandemic nation-building. Although China might be wary of the  QUAD grouping, the countries part of this grouping will be not in favour of severing their economic ties with China. The possibility of a direct conflict with China is therefore unlikely. Mr Biden will be focusing on restoring the prestige of the US that has been damaged especially under the presidency of President Donald Trump. Chinese even are aware that a direct conflict with the US is a wrong idea as the most developing and developed nations will side with the US given its military capability. Biden might aim at mounting pressure on China on issues of human rights.

Mr Biden has come ahead of President Trump in the polls. With COVID-19 ravaging the American society, no signs of green shoots in the economy, high levels of unemployment, the civil unrest that has gripped the society following the death of George Floyd; an African American in police custody, Mr Biden if voted to power will inherit a world in turmoil. His policy no doubt will be more pragmatic and rational than Mr Trump. What is also important to note is the fact that in terms of interactions with China, Mr Biden and the Democratic Party have held a positive attitude. It would be wrong to blame Beijing every time for ratcheting up the tensions with the United States, the U.S. President is equally responsible. He has misled the public with his dubious facts and false claims.

Fierce competition between the two superpowers cannot be avoided but the world can hope to see improvement in the relations and a new chill in the relations cannot be tolerated anymore. Mr Biden should practise what the former US president Theodore Roosevelt believed, that if you “speak softly and carry a big stick: you will go far “.