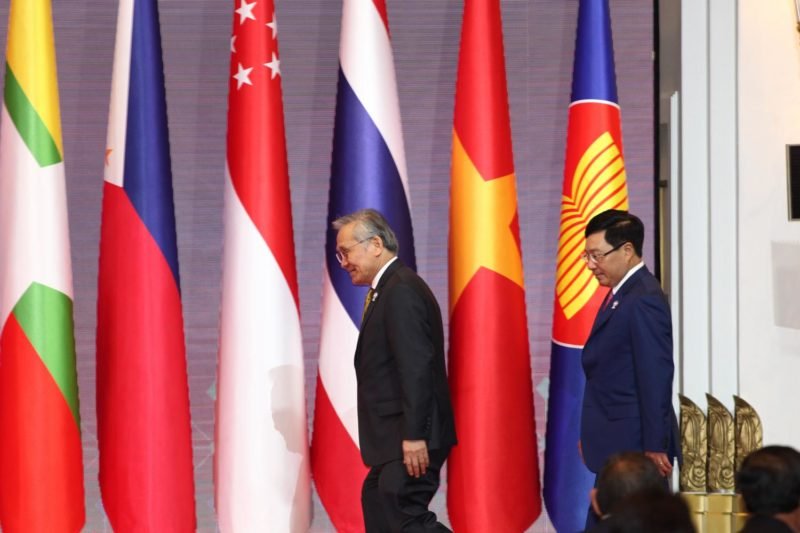 COVID-19 (C-19) event is posing serious challenges for the Association of South-East Asian Nations (ASEAN) in 2020. But Vietnam, as current ASEAN chair, is trying to make the best of the situation and demonstrate leadership. As 2020 marks a mid-term review of the implementation of the ASEAN Community Building Blueprints 2015–25, Vietnam chose ‘Cohesive and Responsive ASEAN’ as the theme for its chairmanship.

The theme is supported by five priorities identified by Prime Minister Nguyen Xuan Phuc in his keynote speech on 6 January. The priorities include contributing to regional peace, security and stability by strengthening ASEAN’s solidarity and unity; intensifying regional connectivity through the use of digital and novel technologies; promoting ASEAN identities and shared values; strengthening global partnerships for peace and sustainable development; and improving ASEAN’s responsiveness and operational effectiveness.

Despite the goal of intensifying regional connectivity, the C-19 event is disturbing global and regional supply chains. Vietnam had planned to organize more than 300 different conferences and activities during its term to celebrate the 25th anniversary of its ASEAN membership and to promote regional interactions. But the pandemic is causing numerous events to be postponed or even cancelled.

Many countries are in total or partial lockdown to flatten the transmission curve. Still, social distancing is increasing the use of telecommunication technologies used for teleworking and online teaching and learning. This trend, in line with the priority of promoting digital technologies, is enabling Vietnam to carry out its chair responsibilities by holding virtual meetings with ASEAN members and external partners.

Although division among ASEAN on how to respond to China in the South China Sea has undermined unity in recent years, Vietnam as chair of ASEAN is unifying member states in the fight against C-19. Since the beginning of the outbreak, Vietnam has worked closely with ASEAN members to help cope with the complex developments of the disease. On 14 February, Vietnam issued the Chairman’s Statement on ASEAN Collective Response to the Outbreak of C-19, which stressed the importance of ASEAN solidarity and promoted cooperation on multiple levels.

On 31 March, Hanoi held the ASEAN Coordinating Council Working Group on Public Health Emergencies teleconference for member states to share information about their situations and the implementation of control measures.

At the ministerial level, Vietnam chaired two sessions of the ASEAN Coordinating Council on 20 March and 9 April, comprised of ASEAN foreign ministers, to discuss ways to strengthen collaboration between the group and its partners.

In the spirit of a ‘Cohesive and Responsive ASEAN’, Vietnam organized the Special ASEAN Summit on Coronavirus Disease 2019 on 14 April to urge member states to remain united and to act decisively in response to the pandemic. The leaders agreed to create a C-19 ASEAN Response Fund and regional reserves of medical supplies.

Non-Aligned Movement for the betterment of Multilateralism

Vietnam is also using the ASEAN chair to advance the organization’s cooperation with countries around the world. It was primarily within the universal organization of the United Nations (OUN).

As ambassador Hasmi Agam and prof. Anis H. Bajrektarevic recently noted in their policy paper on the UN: “…what presents itself as an imperative is universal participation through intergovernmental mechanisms. That very approach has been clearly demonstrated by UN member states, as shown by the active roles played by Indonesia (in the SC, along with another ASEAN and NAM member, VietNam; and on behalf of the general membership of the UN General Assembly), Azerbaijan (on behalf of NAM) and France (on behalf of the P5 and the EU) reaching out to Tunisia – a member of the Arab League (LAS), AU, OIC and NAM. The same line has been also endorsed by the UN Members States on 18 May 2020 in relation to the independent inquiry request over the WHO conduct. … this is well recognised by UN Secretary-General Antonio Guterres himself, who recently stated that “With two-thirds of UN Member States, the Non-Aligned Movement has a critical role to play in forging global solidarity”.

But the list of Vietnam’s regional and bilateral activities is extensive too: At the ASEAN–China Foreign Ministers’ Meeting on cooperation in responding to C-19 in Laos on 20 February, Chinese Foreign Minister Wang Yi informed ASEAN of the situation in Wuhan and other parts of China. The bloc confirmed its support for China in combating the disease.

On 20 March, Vietnam chaired the ASEAN–EU ministerial teleconference on cooperation in fighting the pandemic. The two sides agreed to heighten information sharing, experience exchange, and policy consultation in diagnosis, treatment and vaccine production.

As chair of ASEAN, Vietnam was invited to the G-20 emergency online summit on C-19 on 26 March. Besides sharing Vietnam’s C-19 control experience, Prime Minister Phuc stressed the importance of solidarity, cooperation and collaboration at global and regional levels. He added that fighting the pandemic should accompany facilitating trade and investment cooperation.

Although the US–ASEAN Summit — initially scheduled for mid-March — was postponed, Vietnam held the ASEAN–United States High-Level Interagency Video Conference on Cooperation to Counter C-19, a senior officials-level meeting, on 1 April. The two sides reiterated the value of the ASEAN–US Strategic Partnership in facing the unprecedented challenges of the pandemic.

The success of this meeting led to the Special ASEAN–US Ministerial Videoconference on C-19 on 23 April with the participation of US Secretary of State Mike Pompeo. Vietnamese Deputy Prime Minister and Minister of Foreign Affairs Pham Binh Minh thanked the United States for its US$19 million for financial support to regional countries in combating the disease. Foreign Minister Pham also proposed further ASEAN–US public health cooperation by sharing information, experience and best practices.

Despite a rough start, Vietnam is demonstrating its leadership through quick responses and proactiveness in coordinating member states and external partners. Still, the accusations between the United States and China over the disease’s origin and their handling of the pandemic are putting Southeast Asia in a complicated situation. As both powers are important partners of ASEAN, growing strategic competition between the two will again put ASEAN unity to the test in the post-C-19 era.

Bich T Tran is a PhD candidate at the University of Antwerp and a Researcher at the Global Affairs Research Center, Ryukoku University.