India assured of seat under new voting arrangement at UNSC 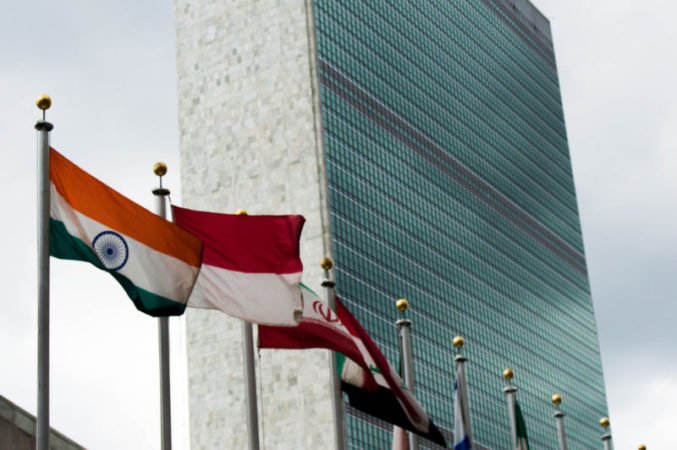 UN General Assembly will hold elections on June 17. From India’s perspective, any change in how the voting is conducted will not impact much since it is the sole candidate vying for the lone seat from the Asia Pacific grouping for the 2021-22 term.

The UN General Assembly on Friday adopted the decision “Procedure for holding elections by secret ballot without a plenary meeting during the COVID-19 pandemic”. UN press release said, “The Assembly decided to hold the election of non-permanent members of the Security Council and the election of members of the Economic and Social Council in June 2020, simultaneously, without holding a plenary meeting of the General Assembly.”

Traditionally, the UNSC elections are held in the General Assembly hall with each of the 193 member states casting its vote in a secret ballot However, large in-person meetings at the world body’s headquarters stand postponed due to the COVID-19 pandemic till the end of June. UN staff and diplomats are working remotely.

Resolutions are being adopted by the UN body through a silence procedure, under which if no member state raises any objections to the draft within a specified period of time, the President of the General Assembly will circulate a letter confirming the adoption of the text.

Under the new voting arrangement, President of the General Assembly Tijjani Muhammad-Bande will circulate a letter to all Member States at least 10 working days prior to the first round of the secret balloting, informing them of the date on which the elections will be held, the number of vacant seats, the venue where ballots may be cast and other logistical details.

If the total number of ballot papers cast in all the ballot boxes do not amount to at least a majority of the members of the Assembly, the President would circulate a letter to all Member States indicating a new date and time for the elections. The General Assembly President will circulate a letter to all Member States informing them of the results once the voting is complete and the ballots counted.

Election procedure for selection of non-permanent members at UNSC

The United Nations Security Council (UNSC) is the most powerful of the principal organs of the United Nations (UN). According to the UN Charter, the UNSC is charged with the maintenance of international peace and security.

The Security Council consists of fifteen members of the United Nations. Five members are permanent: China, France, Russian, United Kingdom and the United States of America. Ten non-permanent members are elected by the General Assembly for a two-year term by secret ballot and a two-thirds majority. The Assembly elects each year five non-permanent members of the Security Council. A retiring member is not eligible for immediate re-election. Elections are held within UN Regional Groups.

This year India is the only candidate for the Asia Pacific seat. Canada, Ireland and Norway are vying for two seats in Western Europe and other countries category. Mexico is the sole contender for the one Latin America and Caribbean seat and Kenya and Djibouti will contest the seat available for the African group. The term for elected members will start from January 2021.

The future course of action for India

India is assured a win as India’s candidature for a non-permanent seat at the UN Security Council for a two-year term has been unanimously endorsed by the 55-member Asia-Pacific grouping, including China and Pakistan. This is a major diplomatic win and India is looking forward to work very closely with the countries within the Security Council.

The 2021-22 term will be critical for India. India has been pushing efforts to reform the Security Council for years now and seeks a permanent membership of the Council. With number of countries now advocating that the current UNSC structure does not represent the geo-political realities of the 21st Century, support for India has been increasing.

India’s quest for a permanent seat at the UNSC was historically fuelled by the need to ensure the protection of national interest when the powerful world body takes up contentious issues such as Kashmir and other crucial diplomatic decisions. India has been pushing the point that it deserves to be a permanent member of the Council because of factors such as its population, its growing economic stature and positive role played by it while taking up global responsibilities like peacekeeping.

Indian diplomats at the UN suggest that India, along with other members of G4, needs a more aggressive campaign within the organs of the UN to turn UNGA resolution for expansion of the UN Security Council into a reality.