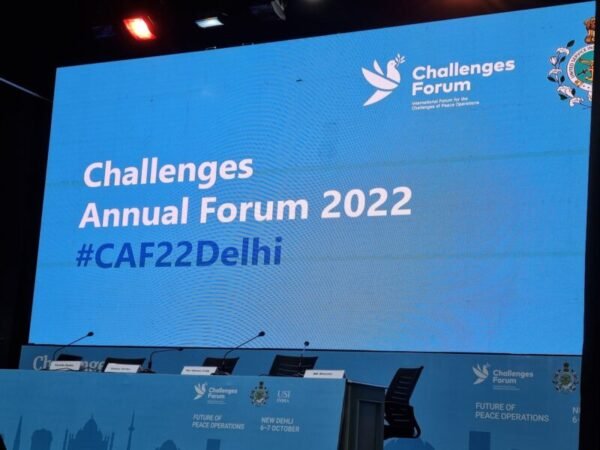 Over 100 key stakeholders from more than 40 countries gathered in New Delhi during 6-7 October 2022 for the USI – Challenges Annual Forum 2022 (CAF22). This event was hosted by the Challenges Forum International Secretariat and the United Service Institution of India (USI).

CAF22 was based on the theme “Future of Pace Operations”. The three sub-themes were chosen for extensive deliberations during the two days:

Below are the excerpts from the most authoritative voices on Peacebuilding:

The eminent panellists on Day 1 discussed various subjects from peacekeeping operations to other global concerns of recent times like climate change, regional conflicts, terrorism, misinformation, organised crime etc. Acknowledging ‘leaving behind’ an improved political and security situation as the ultimate goal of peacekeeping, the committee recognised the successes of the UN in peacekeeping and conflict resolutions including Namibia, Cambodia, Mozambique, Angola, Timur-Leste and Sierra Leone, etc.

Factors like the deterioration and changes in the political climate were mentioned. Speaking of the world where conflict is ever-evolving, an opinion was formed that multilateral systems should do more for mitigating the effects of diverse challenges like climate change. Maj. Gen. BK Sharma, Director at USI brought out the emerging challenges in technology, cyber-space, the arctic region and proliferating social media, requiring special attention in such global discussion forums.

Sanjay Verma, Secretary (West), Ministry of External Affairs, India highlighted India’s role and contribution to Peacekeeping Missions as one of the credentials for our engagement with the global community. India is one of the highest Troop-Contributing Country (TCC) to the UN efforts in conflict resolution. Mr Verma also gave pointed guidelines on India’s perspective on the UN and UN Peacekeeping, which included ample scope for including TCC in mandate formulation and planning, and democratising the UN Security Council by bringing in realities of 21st-century membership.

The Panel with other eminent speakers including Elizabeth Spehar, Assistant Secretary-General for Peacebuilding deemed it important that intermediate goals like Civilian protection and national capability building be met. For this, regional and sub-regional partners are necessary. Further diversification of operations and their multidimensional facets are also deemed necessary.

However, there was an atmosphere of condemnation for the lack of unanimity in the security council. The divided international community is regarded as the key challenge. Under-Secretary-General for Peace Operations, Jean-Pierre Lacroix, expressed concerns over regional conflicts like Mali and the Democratic Republic of Congo due to the complex involvement of local, regional and national elements. “What is peacekeeping with no peace to keep” was one of the primary concerns. Limits of peacekeeping operations and their distinction from peace enforcement too were stressed.

The reforms of Security and Peacekeeping Pillars from 2019 is an important development that Assistant General Secretary Elizabeth Spehar stressed upon. She viewed both traditional and new challenges with equal importance. She also focused on People-centric resolutions with the help of Special Political Missions for preventive diplomacy like attempts in Yemen and Syria and Mediation Divisions and Electoral Affairs Groups.

Peacebuilding funds provide resources and assist with the mobility of various tools for the same. However, the involvement of International financial institutions like the World Bank and Private sectors to strategically align with them is just as necessary. Concern was expressed for a shared understanding of the root causes of tensions and subsequent conflicts and the consequential need for joint analysis. It was opined that bottom to top approach is necessary.

Pathways for Peace 2018 Landmark Report also found a mention by the chair. Finally, the need for youth representation and participation in peace courses, the inclusion of other stakeholders and the need for peer-to-peer engagement was expressed by African Union’s Youth Ambassador for Peace in South Africa, Cynthia Chigwenya.

She expressed that economic incentives and unemployment are the factors that push the young into insurgency or a conflict in its infancy. So, it is not necessary to just deal with the symptoms but actually resolve the conflict. The chair also pushed for not just funding of NGOs for these diverse efforts but ensuring that Policy Continuity is retained. The importance of govt for such policy retentions was mentioned. Out of the funds for fragile states, only 10% was used for peacekeeping and 4% for conflict prevention was lamented.

There are numerous international instruments aimed at peacekeeping operations Is there a systematic exchange of information between the UN and regional institutions that provide safety and security for blue beret troops? The following are two areas where the host country falls short:

The UNPKO’s speciality is identifying fatalities, malicious acts, causes, and consequences while using peacekeepers as a diagnostic tool to add something. Even though they are on the rise, there has also been success in reducing attacks by implementing a strategy in which human costs are shared among different countries.

The host country should be represented, and the force commander should have previous experience and leadership qualities on the ground. Economic support for UN troops should take the form of empowering locals, as these conditions will encourage peacekeepers to stay and restore lost faith in the region.

Peacekeeping works in a linear hierarchy, which needs to be changed into strategic culture and thinking in which TCCs can play a major role and must be injected into the entire Institutional loop. UN Council reforms need to be changed and descriptive. At the regional level first Political convergence of the UN mandate and second forces operating needs to have compatibility with UN forces and the ability to work under the UN flag.

Lt. Gen. JS Lidder, former Force Commander in UNMIS where he was again employed as DSRG and representing USI, highlighted that ever since warfare began military components work on two factors:

The key is empowering the Junior leaders to make mistakes and learn from operational innovation.

Taking part in discussions, Maj Gen AK Bardalai, distinguished fellow at the USI, and former Deputy Forces Commander at UNIFIL intervened that decision-making is the key to leading a complex UN mission. When it comes to who decides, it is often a matter of character, mindset, and a few other factors. The institution plays an important role in changing people’s mindsets and intellectual abilities. The importance of narratives and the stories we tell.

We should also consider the type of communication we use and the stories we tell to connect people, stories that fit the profile of courage. While providing strategic communication, a well-thought-out political and operational strategic plan must be included. Since no mission has been able to eliminate the military and police strike, the national capitals have jumped on board.

The challenge between Need vs. Appetite to commit forces on peacekeeping, and reality vs. expectations need to be considered carefully. Various delegates were unanimous that we require overall space for diplomacy to operate. Global agreement to reach out to people. To what extent does our government represent the people and what do the people want? How far does it go? Who are the primary protectors in your opinion? We must sometimes protect civilians when the state fails to provide adequate protection. The world we had grown accustomed to resembled the world of yesterday. Countries such as Norway, Brunei, and Japan are partnering to support more missions, and agenda issues should be prioritised.

Bintou Keita, Special Representative of the UN Secretary-General at DRC spoke about the devastating events of 25-26 July 2022, which resulted in the death of at least 15 people in a violent demonstration in the North Kivu Democratic Republic of Congo. Those killed included two Indian police officers and a Moroccan ‘blue helmet’. She mentioned these as the result and consequences of misinformation and disinformation. She added “Fear, anxiety, and trauma are all having an impact on how we carry out our mandates”.

Kano Takehiro, Director General International Peace Cooperation Headquarters, Japan raised a point about the inclusion of regions and countries like South Korea, Myanmar and the South China Sea which hardly finds any discussion in the formation of the UN Agenda.

He also spoke about redoubling the efforts, so that robust & resilient multilateralism and the rule-based order continue to be the world of today and tomorrow.

Mr Takehiro highlighted that a new agenda for Peace should provide a new impetus to the U.N. report, including the Security Council. He added, “a new agenda for peace should pay balanced action to various regions of the world wherever international peace cooperation potentially needs it”,

“Certainly, a new agenda for peace should be better aligned with known U.N. peacekeeping operations,” he said.

Dr Yvan Ilunga, Assistant Professor of Political Science and International Relations, at Salve Regina University raised an important question about the idea of image, who is a Peacekeeper? Are they Peacekeepers or are they institutions?

Dr Lotte Vermji from NUPI, Norway, and Col (Dr) KK Sharma, former military observer, trainer and visiting fellow at the USI focussed on the Protection of Civilians in their discussions. They added that a community approach with bottom-up involvement of civilians can pay rich dividends in protection mandate. On protecting the protector, Lt Gen Chander Prakash from the USI and former Force Commander at MONUSCO pointed out to the lack of intuitional safeguards for peacekeepers. UN Security Council Resolution SCR 2589, passed under the presidency of India in Aug 2021 was a landmark resolution fixing the responsibility of the host government to investigate and bring perpetrators of violence against the peacekeepers to justice.

The 2-day event ended with remarks from Lt. Gen. M Fernandez, VSM, Director General, Directorate of Staff duties at Indian Army “The world is watching us today, we must act proactively, utilize the resources, the future of humanity is watching us all“. Maj Gen BK Sharma, Director USI summed up and proceedings and congratulated different working groups for very rich discussions and expected these to be vital inputs into the New Agenda for Peacekeeping.

On the sidelines of the Seminar in the facility of USI of India, New Delhi; a book on ‘India and UN Peacekeeping: Through the prism of Time’ was released by Jean Pierre Lacroix, Under-Secretary-General for Peace Operations, United Nations. The book has been edited by Maj Gen PK Goswami, VSM, retd. Deputy Director, USI of India. The book is a compilation of various articles published in the USI Journal since 1953. The articles relate to India’s contribution to UN Peacekeeping.

The book is timely as the UN itself is going through a testing time and its main instrument of Peace and Security through the UN peacekeeping operations is under many discussions. These writings act as a reflection on the thought process and are context specific of those times. The book also sheds light on the evolution of India’s participation in the UN Peacekeeping operations for the last 70 years.