COVID-19: Working on the Diplomatic Front 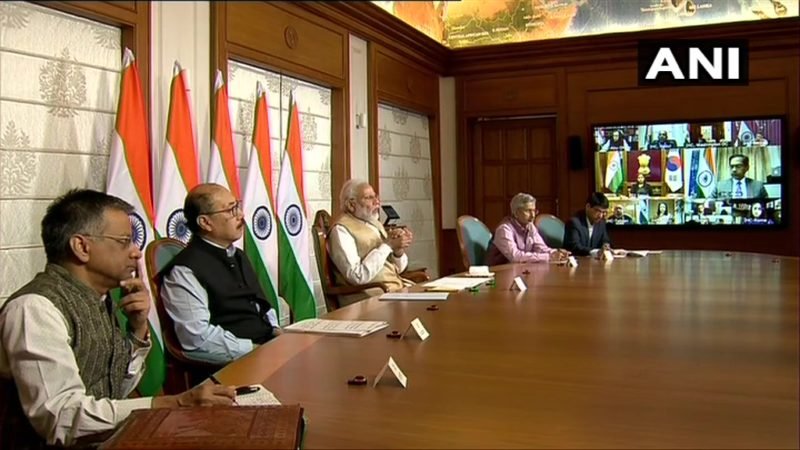 In a podcast with India Foundation, the Foreign Secretary of India Harsh Vardhan Shringla spells out the efforts being made by the Ministry of External Affairs to deal with the global pandemic and how India has played its role as the first responder in the region.

As the pandemic has spread throughout the world, the responsibility has shifted to the foreign ministry to bring back millions of immigrants stranded abroad and reach out to the countries in the region and beyond to design a more integrated approach in dealing with the crisis.

The foreign secretary outlined the role of the Ministry of External Affairs in the current context of addressing issues that have risen from the outbreak of COVID-19. There has been a significant change in the way the ministry is conducting diplomacy and communicating with their envoys. Most importantly, the ministry has had to reframe their national and international concerns in the context of the pandemic.

The most evident action that has been taken is the involvement of high-level bureaucrats such as Prime Minister Narendra Modi in multilateral discussions such as SAARC, G20 and NAM Contact Group summit. The External Affairs Minister Dr Jaishankar has been very active with his counterparts; he recently had an engagement with Quad+6 group and the BRICS group and is soon expected to talk to his colleagues in the SCO group, as well as various foreign ministers from different parts of the world. The Foreign Secretary himself is conducting the Indo-Pacific dialogue and engaging with Russia, Australia, EU and so on. The priority has been to maintain communication at the diplomatic level, and almost exclusively on the subject of the pandemic.

The emphasis has been on a holistic government approach where all the key ministries have been involved such as the Ministry of Health and Family Welfare and the Ministry of Civil Aviation. The cabinet minister has been chairing several of the inter-ministerial discussions. They are being conducted on a very regular schedule which has two distinct advantages: it has ensured the necessary contribution from all and it has increased awareness of what the other departments and agents of the government are doing.

Foreign Secretary Harsh Vardhan Shringla expressed his content with how quickly India was able to respond to the pandemic- as early as 2nd February. Steps were taken to cancel visas from China, halt international flights, facilitate the evacuation of India citizens from the worst-hit zones such as Wuhan and provide consignments of essential goods to China as well. Further measures were taken to prevent influx from other countries. Even during the lockdown, numerous government servants and COVID cell were working around the clock to ensure smooth and prompt operations.

Ministry of External Affairs also worked with the other ministries to ascertain the demand of pharmaceuticals in the global market and allocated where the surplus of much-needed hydroxychloroquine and paracetamol will go. The “medicine diplomacy” sparked great positive sentiments from countries around the world as they thanked India personally for helping in the time of need. In addition, India sent rapid response teams to areas which needed them such as Maldives, Kuwait and Seychelles. Another area India involved in was the evacuation of foreign nationals. In that effort, MEA managed to evacuate 60,000 foreign nations from India to seventy different countries which other governments were very pleased with. The ministry also empowered the heads of missions abroad to aid the stranded Indians in countries as far as Peru, Saudi Arabia and Bulgaria.

The Prime Minister himself interacted with the all the heads of missions over a video conference and gave them key directions to follow such as sourcing health equipment India requires in the fight against the pandemic. The issue of disrupted supply chains has been very significant and extensive discussions are being conducted to find solutions for it. One solution was to ramp up domestic production of medical essentials such as PPEs, and another was to research where the needed technology could be acquired from. It is India’s utmost effort to be involved in the development of the vaccine anywhere in the world and contributing towards it. MEA has been quite successful in leveraging their connections through missions abroad to the best of their requirements.

Currently, India is at its most important and critical juncture as it has permitted Indian nationals to come back from abroad and allow the movement of migrants within the nation. Under the ‘Vande Bharat mission’, thousands of Indians have been able to return. It has been a very complex repatriation exercise but it will soon be expanded in its scope. It requires widespread cooperation between the missions, headquarters and different government agencies that are involved. The foreign secretary highlighted that it was up to the mission to decide which individuals will be permitted to return to India based on their compelling reasons and that these trips were paid by the individuals themselves. The passengers have to undergo a strict series of requirements and protocols such as medical checks and quarantine.

MEA has developed an impressive digital platform which allows any individual access to necessary information about the repatriation process and employment solutions provided by Ministry of Skill Development and Entrepreneurship. Another innovative step that has been taken is the appointment of a team for each respective state to ensure smooth communications.

All this has been possible because of India’s stringent and firm actions that it has taken in the fight against the COVID-19 pandemic.