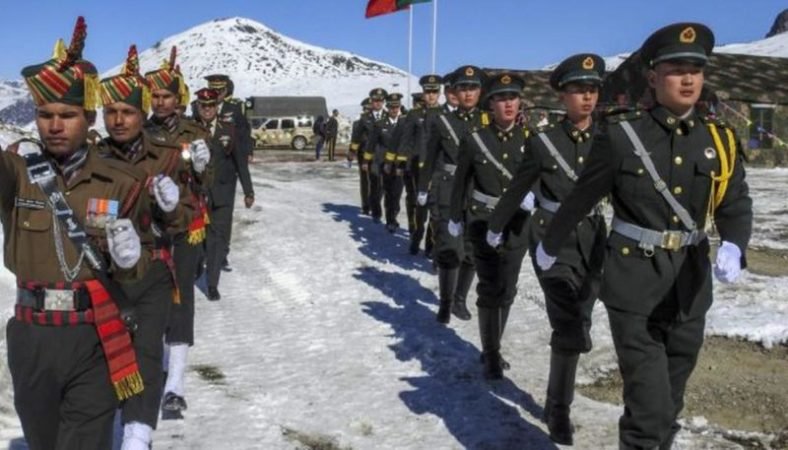 The armies of India and China have been engaged in a stand-off and a military build-up in Ladakh ever since Indian and Chinese personnel clashed both in the eastern and western sectors of the Line of Actual Control (LAC), the de-facto India-China border.

Personnel from both sides were injured in both the clashes. The Ladakh clash was, however, more serious with several Indian Army personnel requiring specialised treatment in Chandimandir and Delhi for serious injuries, with some reports saying the number of injured could be as high as 72.

It has since been learnt that, on 5 May, the two armies also had a face-off in North Ladakh’s Galwan river area. It has since also been learnt that China has made at least three transgressions into the area with at least 500 personnel at each place, pitching 80-100 tents, substantially increasing their troops, and bringing in heavy machinery, with some reports suggesting even the induction of artillery — though the artillery is reported to be well within their territory but in a supporting position to the troops on the frontline. The Indian Army has also rushed in additional troops to match the Chinese deployment and the two sides are now locked in an eyeball-to-eyeball face-off.

The Chinese have escalated the situation at Pangong Lake as well which is a 135 kilometres long glacier-melt lake. On the lake’s northern bank, there are a number of mountains that jut forward into the lake in major spurs, called “fingers” in military parlance. There are eight such fingers and the Indian understanding is that LAC is at Finger 8, even though the Indian physical control extends up to only Finger 4. The Chinese understanding is that LAC is at Finger 2 — making the area between Finger 2 and Finger 8 contentious.

Before the current situation, the Indian Army would patrol till Finger 8 and the Chinese would also likewise patrol till Finger 2 with occasional flare ups when the two would come across each other. It was at Finger 5 where the two armies clashed earlier this month and the Chinese side has since not allowed the Indian patrols to go beyond Finger 2.

The Chinese have been reported to have started to work on constructing a bunker between Fingers 3 and 4, disallowing the Indian side access to the rest of the area. They have also brought in heavy machinery including earth-moving machines and trucks and have started to work on building barracks and a warehouse in addition to the bunker. A Chinese flag has also been reportedly planted in the area.

Even though the first clash occurred on 5-6 May, tensions had been simmering for weeks prior to that. The scale of Chinese aggression has been such that, in April-end, when the Indian Army’s Leh Corps Commander was surveying the area in a helicopter, two Chinese helicopters came and chased the Indian commander’s helicopter. Later in early May, the Indian Air Force had to direct two of its fighter planes to respond to the intruding Chinese helicopters.

While transgressions at the Pangong Lake are common, this is not the case at North Sikkim and North Ladakh which do not fall into “disputed and sensitive” areas. This is not just the only point of concern. At least five rounds of talks between local military commanders have failed to produce any result.

In what would be a dramatic escalation, NDTV reported that a joint patrol of the Indian Army and the Indo-Tibetan Border Police (ITBP) had been disarmed and detained by the Chinese last Wednesday (20 May) and were released later. The Indian Army denied such an episode.

Other than this, the only official statement has been from the Ministry of External Affairs that said the Indian side is “committed to peace and tranquillity along the border, but will take all steps to safeguard the country’s sovereignty and security” and added that “all Indian activities are entirely on the Indian side of the LAC. In fact, it is [the] Chinese side that has recently undertaken activity hindering India’s normal patrolling patterns.”

Even as the security establishment and the government remains tight-lipped, it is believed that the National Security Advisor Mr Ajit Doval is keeping a direct eye on the situation and the Prime Minister’s Office is regularly briefed.

It is not just India that is facing the Chinese aggression. The South China Sea has seen Chinese muscle-flexing, Taiwan has been harassed, Australia has been bullied, and, in the latest move, Hong Kong is being stripped of its autonomy with a new national security law.

Major General (Retd.) Rajiv Narayanan, former Additional Director General of Military Operations and presently the Head at Centre for Strategic Studies and Simulation at the United Service Institution of India, believes the aggressive posturing along the LAC and in the Western Pacific needs to be seen in the light of extreme anti-China sentiments and global economic pressure on China.

“The Chinese coercive and “wolf warrior” diplomacy has failed and even many people within the Chinese Communist Party are questioning the policies and strategies of Xi Jinping,” Gen. Narayanan says.

He says Chinese President is getting aggressive with the world to externalise the threat that his authority may face.

“President Xi had to externalise this threat. He had to raise the nationalism card, particularly prior to the Two Meetings that conclude on 28 May,” he says. With regard to the Chinese aggression towards India, Gen. Narayanan says, “You need to remember that India is now chairing the World Health Organisation’s Executive Board and it would be onboard the investigations against China on the Wuhan Virus.”

But will President Xi succeed in pushing India into submitting? Gen. Narayanan does not believe so.

He says, “India has more than adequate resources to counter the Chinese which the People’s Liberation Army is also aware of. The situation should peter out post-28 May — by mid-June.”

About the gains for Chinese President from the episode, Gen. Narayanan says, “He is unlikely to get any assurances from India. What he will gain is possibly some breathing space within his party.”