May 4th: The Day that changed China 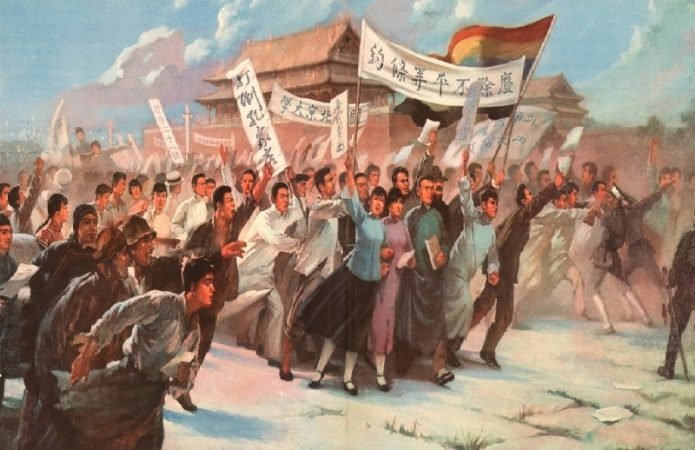 May 4, 1919, was a turning point in Chinese history. The day saw the eruption of a mass anti-imperialist, anti-traditional movement led by hundreds of students

The movement was a culmination of several events. The establishment of a Republic was short-lived after the monarchical rule was abolished in the Xinhai Revolution of 1911.

General Yuan Shikhai took over the reins of the government and concentrated all powers in his own hands. The Legislature became defunct. After his death in 1916, several regional warlords tightened their grip in different parts of China.

Shandong province in eastern China became a German colony in 1898 when Germany leased Jiaozhou as a naval base for 99 years. As the First World War (1914-1918) broke out and Germany’s defeat became imminent, Yuan Shikhai led government in China signed a secret pact with Japan for the transfer of rights of Shandong to the Asian empire.

In return for a loan, Yuan Shikhai allowed Japan to build railroads and deploy its military in the region. As the War came to an end,the word about the secret treaty got out which sparked protests.

However, political factors were not the only reason behind the movement.

While World War I halted industrial development in the West, it proved to be a boom for China’s industrial growth. Industries like textiles, flour mills,silk, matches and cement saw unprecedented growth. A prosperous merchant entrepreneurial class and a labour class emerged.

Economic prosperity laid the ground for intellectual ferment. The era of Warlordism (1916-1919) saw an ideological vacuum at the centre which provided a broader space for discussions. Peking University (北京大学) or Beida (北大)  became its epicenter. Reforms in the twilight of the Qing Dynasty allowed many Chinese students to study abroad. These students brought new ideas  with them. Many such students like Chen Duxiu, Cai Yuanpei, Lu Xun, Hu Shi joined Beida as professors.

The intelligentsia of this time regarded Confucianism to be completely at odds with individual dignity and freedom. They blamed its hierarchical and misogynistic ideology to be detrimental to China’s growth. They initiated a movement against traditionalism and called for the adoption of Western ideologies like democracy, scientific enquiry and rationality while advocating for gender equality. Hu Shi launched the Plain Language Movement which called for simplification of the Chinese characters to make it easier to learn by the majority.

Anti-Imperial feelings had become a hallmark of Chinese society since the days of the Boxer Rebellion. Anti-Japanese sentiments flared after the Twenty One Demands were put forth. Particularly offensive were the demands of Group 3 (Article 4) which stated that all urban mines be brought under Japanese control. Group 5 demands stated that all railway construction contracts be handed to Japan. After the information related to the secret treaty over Shandong was revealed, the Chinese youth saw red.

With the commencement of the Versailles Peace Conference in January 1919, hopes were high that justice would be delivered. US President Woodrow Wilson’s Fourteen Points inspired many who hoped for a better future. However, the Conference resulted in dismay as the decision at Versailles ended in Japan’s favour.

Students called for increasing defence of Shandong and cabled the Chinese delegation in Versailles not to sign the Treaty. On May 4, 1919, hundreds of students hit the road protesting against the Chinese government’s frail response. Several students were arrested which sparked a general strike in Beijing. Weakened in face of a massive crowd, the government had no other option but to release the students.  A group of Chinese students studying in France gathered outside the Palace of Versailles and prevented the peace agreement from being signed.

A tough choice awaited China. Though the Treaty was not signed, the intelligentsia realised that the West could not be trusted anymore. Western Europe, which was seen as the pinnacle of civilization, laid in ruins of the War. Moreover, their proximity to Japan, whose imperial ambitions still loomed large on China, made any alliance unthinkable. A friend was sought in the Soviet Union.  The Russian Revolution of 1917 had inspired many among the Chinese intelligentsia. Marxism- Leninism which was critical of the West appealed to many. Post the Revolution, The USSR did not have many allies and China’s attempts at friendship were warmly regarded. In 1921, The Chinese Communist Party was founded by Chen Duxiu, Li Dazhao and many other leaders of the May 4th movement.

The movement impacted Chinese society in enormous ways. It did not just lead an attack on Imperialism but sparked a cultural renaissance. The issues were not just political but also social. The movement accelerated a dialogue for gender equality. Though it is true that there were a few prominent women leaders and men dominated the dialogue for change, new ideas had entered China’s political landscape.

More than anything, it was an attempt by the people of China to pull their country out of the claws of Imperialism, to save it from further exploitation and to reform it and chart a course for its path to modernity and development.

Cherry Hitkari is a first year Postgraduate student of East Asian Studies at University of Delhi.