Can India take the centre-stage in post-pandemic order? 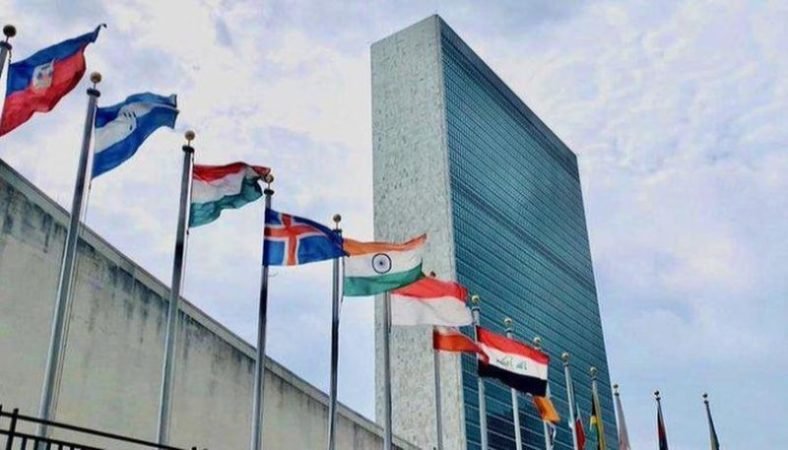 If you have been following the movies, you know that all thrillers have a common storyline: a crisis strikes the United States, spreads to other parts of the world and then an American saviour emerges and saves the human race from extinction.

The reality, however, offers a stark contrast because the crisis struck almost 11,500 km away from the US, spread to other parts of the world including the US and while the world looked up to America to save the world, it became the epicentre of the crisis with the highest number of cases and deaths in the world.

This political vacuum presents itself with ample opportunities for the post-pandemic order. While predictions are in full swing of what a post-COVID-19 world looks like, experts and analysts are putting their bets on the two most powerful players in the current global order: the United States and China. On the other hand, there’s a call for a rise of international anarchy given the gradual decline of both countries.

A closer look into the regional balance of power puts forward the idea of the rise of middle powers amidst the crisis. India in the South Asian region has taken effective steps to reinforce the notion of a collective approach in the handling of the pandemic. The idea is not per se to pitch India’s rising power against established superpowers but to recognize possibilities on foreign policy front that will enhance India’s position regionally and project a credible image globally.

The Politics of Dominance: US-China Rivalry

Never in the history of international politics has the world looked so eagerly upon cooperation between the two strongest economies.  Analysts, academicians, scientists, experts are all calling for a truce but the continuing US-China rivalry poses a global leadership dilemma. Both countries are engaged in a confrontational mode that has eliminated any possibility of a collective and multilateral response to humanity’s worst crisis. Cracks began to appear even before 2020 when the US and China were caught in between a trade war. The cracks slowly developed into fissures and pandemic simply acted as a catalyst to accelerate the process.

Internet banter, straightforward accusations, diplomatic tensions have taken centre-stage ever since the virus has entered the US. China is playing its cards carefully with mask diplomacy and is looking forward to grabbing the vacuum in the geopolitical front as the US is struggling with its coronavirus battle. Meanwhile, the US has left no stone unturned to hold China responsible for the spread of the virus and hence claim global responsibility.  The only possible outcome of this high-handedness has been the global push to WHO for an independent inquiry on origins of the virus to avoid such a disaster in future.

The relationship between the two countries is at its lowest point amidst a global crisis with the US President threatening to cut off all diplomatic ties with China.

Europe emerged as the epicentre of the virus after an initial decline in China. Countries of central Europe like Italy, Spain, France, Germany and the UK have been hit the hardest. With one of the best healthcare systems in the world, the ill-fitted response has posed several questions on the western priorities as their health infrastructure was on the brink of collapse.

The European response to the pandemic has faced innumerous challenges. It has been fractured and the regional powers have struggled with the domestic outbreak that they were unable to accept a leadership role. The advanced economies of Western Europe and the Scandinavians struggled with a deadlock during the initial economic relief negotiation over corona bonds. Eastern Europe saw an erosion of political and civil rights where democracy has taken a back seat in countries like Hungary and Poland that are currently governed by right-wing parties.

However, one of the most hardline challenges has been the role of the EU as a first responder.  Amidst the 70th anniversary of the Schuman Declaration that marks the historic beginning of European unity, analysts are looking into the cooperation between European countries and the leadership of the EU during the global pandemic. There has been a rising anti-EU sentiment that is fuelled by nationalist perceptions especially in countries like Italy and Spain that became the epicentre of the virus in Europe.  During Italy’s initial appeal for help, China filled in for the EU and delivered protective gear and other medical equipment to the country. European solidarity has been stretched to its breaking point that is visible in some countries’ unilateral response. The land of Schengen Area is witnessing border paranoia for the first time in decades after a slip up during the 2015 immigration crisis. The pandemic has rekindled the conversation around European vulnerability and widening the North-South divide, while the EU in a damage control mode has come up with assistance packages and strategies to contain aftershocks. European Commission President, Ursula Von der Leyen’s remarks on calling Europe ‘world’s beating heart of solidarity’ has done little to pacify national leaders. The current question mark over the relevance of the EU is like an open wound that will take more than Band-Aid to heal.

South Asia: The Story so Far

When India announced multilateral cooperation on the regional level, there was a ray of hope for South Asia. As early as 15th March, SAARC virtual meet was held to restore solidarity between emerging economies of the region attended by leaders of India, Pakistan, Nepal, Bhutan, Sri Lanka, Bangladesh, Maldives and Afghanistan. The move was welcomed throughout the globe and regional leaders displayed a willingness to collaborate against the virus. A COVID-19 Response Fund was proposed by Indian Prime Minister with the first contribution of US $10 million. Within subsequent days, donations by other countries followed. A follow-up conference was held on 26th March, convened by Pakistan between health experts of the countries to discuss possibilities of setting up of inter-border screening units, isolation centres, online training for emergency response teams and an Integrated Disease Surveillance Portal. Afghan President’s call for a telemedicine network to provide health care to remote areas is a breakthrough for a long-term collective response. SAARC Disaster Management Centre (SDMC-IU), Gandhinagar has also set up a website on COVID-19 for shared use of SAARC countries.

The role of the first responder can be seen as an extension to India’s Neighbourhood First policy where Indian ships and airlines have provided assistance in terms of PPEs, antibody test kits, medicines including hydroxychloroquine to several countries beyond the spectrum of SAARC. India has helped to evacuate the citizens of Maldives, Nepal, Sri Lanka and Bangladesh from the Chinese city of Wuhan, the epicentre of the outbreak. Extended support is being given out to the island nations of the Indian Ocean (Maldives, Mauritius, Seychelles, Madagascar and Comoros) by India’s recently launched Mission SAGAR.  It is a part of Prime Ministers’ vision of Security and Growth for All in the Region ‘SAGAR’ promulgated in March 2015.

India has so far been successful to assert its regional leadership in the Indian sub-continent along with a show of naval strength in the Indian Ocean. A major factor for adequate health diplomacy put out by India is the growing influence of China in the region. China’s mask diplomacy has proved to be an effective strategy in the early stages of the outbreak. It shifted the global mood towards China from responsibility to responder of distress calls. However, India has taken a cautious approach in limiting China’s role in the SAARC region by filling the void.

South Asia has been a paradox in this unprecedented scenario. At present, as of 24th May, the region with 20% of the world’s population has around 4% of the total infections.  While the rate of infection has been effectively slow, most South Asian nations face deeper challenges such as one of the lowest testing rates in the world, inefficient healthcare systems, large populations and a larger amount of marginalized sections.

There has been a call for humanitarian response and an integrated approach towards fighting the pandemic. One of the greatest challenges is the region’s economic vulnerability. According to some reports, the health expenditure in South Asia as a percentage of GDP is low at 3.5% while global average stands at 10.02%.

India was initially spending approx.  0.5% of its GDP on tackling the pandemic. It was extremely low as compared to its counterparts in the West like US that is currently spending on packages amounting to 13.3% of its GDP, Germany 10.7% while smaller economies such as Luxembourg and Belgium are spending a fifth of their GDP at 20.7 percent and 19.2 percent respectively.

With the announcement of the second stimulus package, the percentage has increased to around 10% of GDP, as announced by the Prime Minister that includes liquidity as well as fiscal relief. The largest economy of the region has set an example by providing long-time support for post-pandemic revival. However, the region’s other small economies are struggling with low-public spending, for instance, Afghanistan has spent 0.5%, Sri Lanka 0.2% and  Maldives 2.8% of their GDP on relief packages.

Another important issue that needs immediate attention is the plight of the poor and vulnerable of the country. India is currently facing the worst migrant crisis since the Partition of 1947. While its efforts have been praised by WHO and by other international players, the country has had to face sharp criticism in handling the migrant crisis. By numbers too, the situation seems far worse in India than other South Asian nations, where it is projected that 400 million workers may sink into poverty.

The recent warning by UNICEF puts emphasis on the region’s unsustainable health practices where 4.5 million children are at a risk due to disruption in immunization.  97% of them live in India, Pakistan and Afghanistan.  Disruption in global supply chains is the major hurdle for the region that depends on imports for most of the vaccines.

One of the main reasons for the dormancy of SAARC has been deteriorating India-Pakistan relations which are again being a hurdle in the association’s revival.  The scuffle of both sides on the COVID-19 Response Fund is a bad omen since the region cannot integrate without bilateral cooperation of its arch-rivals. Pakistan’s US$3 million contributions came after the emphasis on the use of funds through SAARC Secretariat as per guidelines given by SAARC charter, whereas India maintains for it to be “outside the SAARC calendar of approved activities”. There is an urgent need for dialogue and finding a common ground until the virus retreats.

To emerge stronger in the COVID-19 aftermath of India, three steps are key.  First, India needs to enhance its Look East policy and collaborate extensively with some of its East Asian neighbours. Countries like Singapore, Vietnam, South Korea and Taiwan have been successful in their containment efforts and collaboration in the health sector can accelerate India’s fight against the pandemic.  Second, India has shown a keen interest in grabbing the supply chain network from industries that are looking to shift their base from China. With adequate reforms that will stimulate growth, India can emerge with a greater role in the global economic web. Third, the primary challenge is to balance the growing power of China in Asia and the most effective multilateral strategy will be to strengthen QUAD.

A virus that knows no political boundaries has to be contained through collective effort and responsibility. The present circumstances provide the right opportunity for India to step up as a rising power in the emerging geopolitical order when major powers of the world are caught in an indefinite battle against a common enemy. Whether SAARC cooperation and regional response will help South Asian nations to balance domestic aspirations along with foreign policy or will it end as a political gimmick, only time will tell.