The US-Taliban Deal & The Perpetual Afghan Conundrum: Options for India 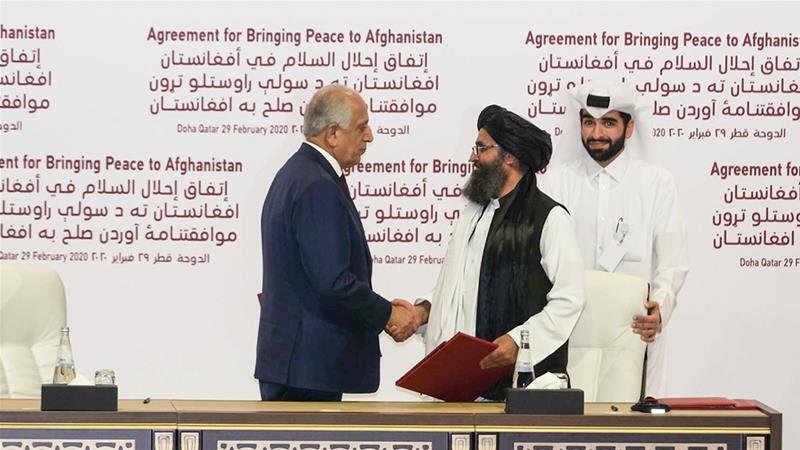 On the 29 February 2020, the USA and Taliban signed the much-delayed deal in Doha, Qatar, named as ‘The Agreement to Bring Peace to Afghanistan’. It has since found much traction only in the media as the Peace Deal, but on the ground things have spiralled from bad to worse, the latest being the attack on a maternity hospital in the western part of Kabul killing 16 people, including two new-born babies, their mothers and a number of nurses. With the Ghani Government announcing the resumption of military operations against the Taliban and other terrorists the situation is back to square one.

The moot question is how did the much-touted peace deal collapse so quickly? Can it be revived? How does it impact Pakistan’s strategic interests in the region? What are India’s options? This paper would assess these aspects, starting with decoding the deal itself, to read between its lines.

Signed with much fanfare, it carried within it the seeds of failure. The absence of the elected government from the negotiations and the deal had already sent ominous signals in the region. The signed deal mentioned four preambles, each setting the stage for instability and a descent back into chaos.

The first essentially commits the Taliban to ensure that the Afghan soil would not be used by any group or individual for attacks on the US or its Allies. This presents the Taliban with an open charter for destabilising all other countries and the region with terror as a state tool. The second provides timelines for the withdrawal of US and foreign troops from Afghan soil but does not speak of any guarantees from the Taliban.

The third preamble is by far the most damaging – “….the Taliban will start intra-Afghan negotiations with Afghan sides (italics mine) on March 10. 2020.” In one fell swoop, by demoting the elected Afghan Government as Afghan sides the US has handed Afghanistan to the Taliban on a platter. It has been given political prominence and the right to decide the structure, attendance, and the agenda for the talks.

As part of the fourth preamble, a permanent and comprehensive ceasefire and the future political roadmap are to be part of the agenda for the intra-Afghan talks, thereby leaving the future of Afghanistan in the hands of the Taliban. Taliban has wasted no time in trying to bring more regions of Afghanistan under its sway (as close to its control as in 1996-2001), thereby giving it a greater position of strength, if and when the negotiations occur.

Is it a surprise that the attacks on Afghans, both civilians and security forces, commenced by Taliban and its proxies (most supported by the ISI, Pakistan) even before the ink had dried? Historically, Afghanistan has always remained a single entity whenever there has been a strong central leader; else it has remained disparate due to its diverse tribal and ethnic loyalties. It seems that the US have resigned themselves to the fact that only the Taliban could provide that strong central leadership, having seen the failure of the (s)elected leadership.

Pakistan has always sought a pliable leadership in Afghanistan to enable it to have strategic depth against India. Its Afghan policy has always been seen through the India-centric prism. While the Taliban 1.0 of the 1990s were beholden to Pakistan for the support, the Taliban 2.0 are a vastly different kettle of fish. They are not a monolith organisation and have many fissures, of which only a few owe allegiance to Pak ISI (e.g., Haqqani network). Some are averse to Pak shenanigans, as was evident by the Taliban refuting Pakistan PM’s attempt to link the deal to Kashmir issue in August last year.

For Pakistan, an unstable Afghanistan would be better than it being peaceful and stable, since then it would lean towards India in the region – a country that has much to offer for its overall sustainable development and growth. Yet, it would aim to have its sway in the instability, with its only worry being the need to deploy troops on its western borders, which upsets its conventional balance against India.

India has always desired a stable and peaceful Afghanistan, a fact some in the Taliban are now acknowledging. The soft power outreach, community development projects, the infrastructure projects, energy projects, health cover in Indian hospitals, education scholarships, etc are slowly being recognised and has generated a sizeable pro-India sentiment amongst the common people that the Taliban cannot wish away. It is this that India needs to build upon with the vast diplomatic skills it possesses and go proactive in its approach. For long India has been reactive, awaiting the outcome of any turbulence with the mind-set of being ready to work with whoever comes to power. It now needs to be proactive during this turbulence and work with both sides to ensure that whoever gains control India’s core interests are protected to some / large extent. It would also enable India’s continued outreach to the Central Asian Republics.

There are three key aspects that India should look for in this pro-active approach, which has been provided in the US-Taliban arrangement itself. However, in the current geo-strategic environment it may be prudent to continue to follow quiet diplomacy and concurrently reach out covertly through back channels to the protagonists – Taliban and the other Afghan sides. If needed, overtly India could nominate its interlocutor for Afghanistan, but this needs to be separate from the covert approach,

India’s security footprint extends from the Suez Canal to the Malacca Straits, since instability in this region impacts India’s national interests. The best form of defence of a place/interest is to provide it depth by reaching out beyond it. With a rising India, it is time to be pro-active covertly in the region so that it does not get short-changed. This outreach cannot either be outsourced or be beholden to any nation; India needs to look after its own interests.

This is uncharted territory, wherein the intelligence agency and the military, to some extent, would also be synergistically involved along with the diplomats. The expertise garnered over many years of back-channel talks and track 1.5 / 2 / 3 diplomacy would now come in handy to ensure that India’s core interests are secured for the future generations by India itself and are not beholden to anyone else.

Maj Gen Rajiv Narayanan, AVSM, VSM, is Head at Centre for Strategic Studies and Simulation at the USI of India. He's retired after 37 years of distinguished service, as the ADGMO (B) in 2016, having been closely involved with Future Strategy, Force Structures and Force Modernisation. He can be reached at klrajiv.n@gmail.com