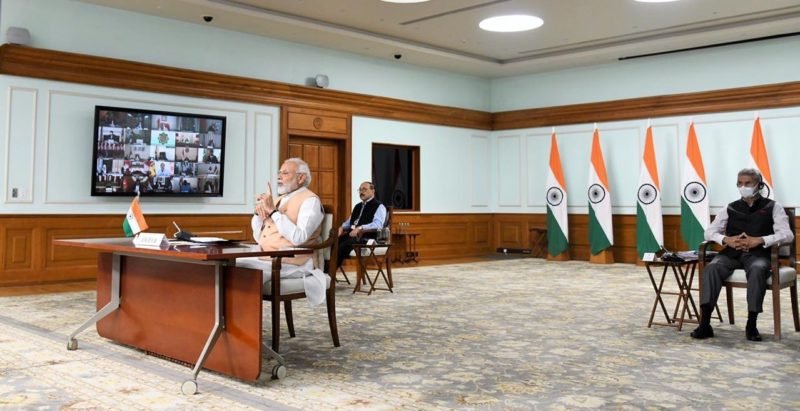 Non-Aligned Movement (NAM), a grouping of 120 odd countries with 17 observer states and 10 international organisations is the largest multilateral grouping outside the UN. As a grouping, NAM represents the developing world and staunchly opposes bloc politics and power rivalries. Set up in 1979, the grouping is a Cold War construct and is based on the foundational tenets of Bandung Principles, enunciated at Afro – Asian Conference of 1955.

During 1979, Havana Declaration, Fidel Castro described the objectives of NAM in following terms “NAM was for ensuring National Independence, Sovereignty, Territorial Integrity, and Security of Non Aligned Countries in their struggle against Imperialism, Colonialism, Neo-Colonialism, Racism and all forms of Foreign Aggression, Occupation, Domination, Interference and Hegemony as well as great Power Or Bloc Politics”.

Just as it was established, John Foster Dulles, one of the most hawkish Secretary Of States of US of all times contemptuously called NAM as “Immoral”. For American’s, it was “India’s exceptionalism” which they felt difficult to understand. Stalin remarked, “those who are not with us are against us”.  Jawaharlal Nehru, India’s first Prime Minister and one of the pioneers of NAM had said “NAM is in accordance with India’s culture and tradition. India will not join any of the military alliances, India will contribute to world peace and harmony”. In the 1970s, since the signing of Treaty of Friendship between India and USSR and India becoming a “quasi ally” of USSR, American’s came to perceive NAM essentially as “Anti- Americanism”.

NAM took decolonization and disarmament as its core agenda in the 60s. While the world was saved from a nuclear winter during the Cuban Missile Crisis, the threat of a Nuclear holocaust always loomed large throughout the Cold War. NAM as a grouping was largely successful in rallying the developing world, concerned about preserving their hard-earned sovereignty. NAM’s efforts helped to secure political independence of many Latin American, African and Asian countries, thereby adding both to its prestige as well as heft. NAM’s constant efforts to project nukes as some sort of a “taboo” resulted in the signing of PTBT in 1963, and NPT in 1968.

In 1973 at the Algiers Conference of NAM, the idea of New International Economic Order sprang up. It was proposed that countries of the north should give better prices for the exports of south and north should provide finance and technology and regulate the conduct of its MNCs that were hell-bent on indiscriminately looting the resources of the south. The achievements were limited in this phase, primarily because the west dismissed the idea as utopian and the oil economies of gulf who were expected to show greater solidarity, unfortunately, faltered to the rising geopolitical issues.

The 1980s was an era of the end of a “detente” phase in the relationship and the arms race began to intensify. As the US under Regan Administration launched the famous “Strategic Defense Initiative”, an already faltering USSR tried to match it with an equal amount of resources and technological investment. NAM had clearly failed with no substantial achievement. The only significant arms treaty of this era was the INF Treaty banning all of the two nations’ land-based, ballistic missiles, cruise missiles and missile launchers with ranges of 500–1,000 kilometres (short medium-range) and 1,000–5,500 km (intermediate-range). The treaty did not apply to air- or sea-launched missiles.

With the collapse of USSR in the 1990s, the world moved towards unpopularity with the US emerging out as an unchallenged hegemon and Fukuyama declaring the “End Of History”.  A big question mark had emerged on the very relevance of NAM, which essentially was a Cold War Construct. NAM started appearing anachronistic and seemed to have lost its raison d‘être. The Cooperative Security Thereat Reduction Treaty (Nunn Lugar Pact), dissolution of Warsaw Pact, Signing of SALT 1 and 2 and CTBT in 1996 and extension of NPT ushered in a new era of relative peace and a world free from Nukes.  All of this happened, even though NATO wasn’t disbanded and if anything, it has substantially expanded since the end of Cold War.

Commentators around the world over remarked that NAM should brace itself for a “graceful exit”, could claim the limited credit for the end of Cold War and by declaring “Mission Accomplished” wind up itself. Even the founding members such as Egypt questioned the need for NAM at the Jakarta Summit of 1991, just after the collapse of USSR.

Indian Prime Minister, Narshima Rao didn’t have even the slightest of doubt and quiet unambiguously declared that “NAM has become all the more relevant to check the unilateral actions of the single superpower”. Over the years, the interest in NAM has kept on declining. At the 2012 Tehran Summit of NAM, only 8 Heads Of States out of a total of 120 participated in the summit and the fact that PM Modi himself didn’t attend 2016 NAM summit and sent Vice President Venkaiah Naidu is a clear indication for loss of appetite in the idea of NAM. India did attend the virtual summit of NAM this year, but that seems to have been much out of compulsion rather than a commitment.

The moot question, therefore, that should agitate us is whether NAM is still relevant or has it become a thing of past. It would be wrong to say that batting for  NAM shows “intellectual laziness” and an obsession with a Cold War construct. With most of the countries, showing a low appetite for NAM, India is poised to enjoy its natural leadership and harness its potential and further its agenda of South-South Cooperation. This, of course, would allow India to exercise its “strategic autonomy”. NAM has become a part of India’s identity and India can’t shed its fascination even if it wants to. It had helped India to pursue a largely independent foreign policy, whilst also at the same time playing an active role in international politics and being able to successfully navigate through power politics. It gave India enough flexibility to maintain independence rather than simply becoming a “camp follower”. As far as domestic politics was concerned, it had allowed Prime Minister Nehru to carefully handle the divisive domestic compulsions. Even Henry Kissinger, who had all scorn for NAM recognises NAM as the best course of action which India could have followed at that point of time.

With Arms Race intensifying, Alliances becoming redundant and India Struggling to maintain an Independent Foreign Policy, NAM offers the best template. Recently last week, the United States State Department came up with its “Adherence to and Compliance with Arms control, Nonproliferation, and Disarmament Agreements and Commitments (Compliance Report)”. The report raises concern that China might be conducting a nuclear test with low yields at its Lop Nur test site, in violation of its CTBT undertakings. The report also claims that Russia has conducted nuclear weapons experiments that produced a nuclear yield and were inconsistent with ‘zero yield’ understanding underlying the CTBT.  The Nuclear Posture Review of USA asserts that the US faces new nuclear threat because both Russia and China are increasing the reliance on nuclear weapons. The US, therefore, has to expand the role of its nuclear weapons and have a more usable and diversified nuclear arsenal.

The already threatened environment is compounded by the fact that the NEW START treaty is set to expire in 2021 and USA has hinted that it would backtrack from INF treaty. Anti Ballistic Missile Treaty of the 1970s has already been consigned to the dustbins of history in 2002 itself. All this makes the situation much grimmer and jeopardises the world peace.

Thus, NAM’s role as the torchbearer of the global disarmament movement becomes all the more important. NAM could play an instrumental role in creating a stigma and a taboo for nuclear weapons, as it successfully did it in early years.

Next, the unflinching and continued support of NAM countries is also very important for a country like India that aspires itself to sit at the high tables.  While India’s temptation to join the elite group is understandable, India should not completely ignore NAM altogether. Today NAM is like an orphan, it is in dire need of leadership, direction and programme of action to get going. India must realise the potential and try to seize this golden opportunity. India would do well to use NAM as a platform to provide for dialogue between civilisations.

Next, India can use NAM for forging a better South-South  Cooperation and further affirming its role as a “Standard Bearer For South”. The immense potential of NAM must be tapped to establish  “India Way”, akin to “Third Way” of the 1960s and 1970s.

In this era of “Militarization of Sea” and “Territorial Expansion”, the time has come to revive the “Bandung Spirit” and resurrect NAM, albeit with a modified agenda and renewed vigour.

Pratik Mall is an Undergraduate student of Political Science at Hindu College, University of Delhi