Pakistan’s fight against Coronavirus threatens its drive to eradicate Polio 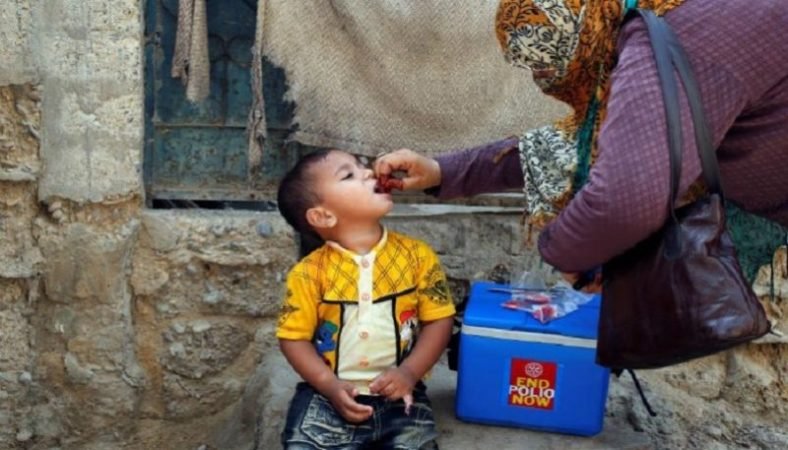 Pakistan’s long battle to eradicate the crippling poliovirus has been thwarted by militant attacks, radical Islamic clerics, and anti-vaccination propaganda.

But the South Asian nation of 220 million people is facing a new hurdle: the coronavirus pandemic.

Pakistani authorities have halted a nationwide door-to-door polio vaccination drive to stop the spread of the coronavirus — with polio workers and resources being redeployed to tackle the pandemic.

Pakistan has registered more than 19,100 coronavirus cases and 440 deaths as of May 3, according to official numbers.

But the real number of infections is believed to be much higher, as little testing has been completed.

The government originally imposed restrictions on the movement of people and enforced social-distancing measures but have since eased them.

Pakistani health officials warn that the suspension of the polio-eradication campaign will prevent tens of millions of children from being vaccinated and fuel a resurgence of the disease.

With the disappearance of wild polio cases in Nigeria in recent years, Pakistan and neighbouring Afghanistan are currently the only countries in the world where new polio cases are discovered.

The coronavirus crisis led Pakistani authorities to stop a nationwide immunization drive scheduled for April that was intended to vaccinate some 40 million children.

The campaign was seen as crucial after Pakistan recorded 147 polio cases in 2019, a sharp rise from a record low figure of 22 cases in 2017. So far this year, authorities have recorded 41 cases.

The majority of the cases of polio — a childhood virus that leads to deformed limbs, paralysis, and even death — were recorded in the northwestern province of Khyber Pakhtunkhwa.

“The number of polio cases will definitely increase because we were in the middle of an anti-polio campaign when the coronavirus outbreak halted everything,” said Abdul Basit, the provincial coordinator for the National Emergency Operation Center in Khyber Pakhtunkhwa.

“It happened in the past and it will happen again that when children are not getting an immunization, the number of cases goes up,” he said, adding that he expected it would be months before the campaign could resume.

“But right now our whole setup is engaged in efforts against the coronavirus outbreak,” he said.

Nadeem Jan, a public health specialist with Khyber Pakhtunkhwa’s government, said the polio campaign must restart as soon as it is safe to do so.

“The current number of cases we have is much more compared to previous years,” he said. “We fear that this number will go up as the polio drive is halted due to the coronavirus situation.”

Jan said all polio-eradication programs have been suspended until May 31.

“We don’t see a chance for an effective countrywide anti-polio campaign until June,” he said. “A wide-ranging campaign is urgently needed.”

Pakistan employed tens of thousands of health workers who went door-to-door to administer anti-polio drops and educate communities that were reluctant to immunize their children.

Now, those same workers are helping a national effort to stem the spread of the coronavirus.

“My duty has now been changed to tracking coronavirus cases,” said Shakeel Khan, 33, a polio worker in the northwestern Khyber tribal district.

“We are monitoring people to see if they show symptoms of the coronavirus,” he said. “We monitor who comes into the district. We are meeting local mullahs and tribal elders to advise them about physical distancing and how they can reduce the chances of being infected.”

But Pakistan’s redeployment of health workers to fight the coronavirus could come at a cost.

Ten polio cases have been recorded since the coronavirus outbreak in March, said Khan.

“Polio cases have already increased since the coronavirus outbreak,” he said. “It will keep increasing in the next two to three months if the polio campaign does not restart.”

The coronavirus is only the latest obstacle keeping Pakistan from eliminating polio.

Khyber Pakhtunkhwa is a poor and religiously conservative region that was once a stronghold of militant groups like Al-Qaeda and the Pakistani Taliban.

Many residents of the province, which lies along the porous border with Afghanistan, have been suspicious of the polio vaccine, with conservative Islamic clerics and militants claiming it is a Western conspiracy to harm or sterilize children.

In April 2019, a vaccination drive in the province was thwarted after a mass panic was created by rumors of children fainting or vomiting after they were immunized.

As the rumors spread, thousands of panicked parents rushed their children to hospitals in the provincial capital, Peshawar, forcing the health facilities to declare emergencies. The rumors turned out to be wildly exaggerated.

Public-health studies in Pakistan have shown that maternal illiteracy and low parental knowledge about vaccines — together with poverty and rural residency — are the factors that most commonly influence whether parents vaccinate their children against the polio virus.

Anti-vaccination propaganda has also been fueled by a distrust of Western governments who fund vaccine programs, including after the CIA reportedly staged a fake hepatitis-vaccination campaign in 2011 to confirm the location of Al-Qaeda leader Osama bin Laden — living in the Pakistani garrison town of Abbottabad — where he was killed by U.S. SEALs.

Since then, some clerics have even issued fatwas saying that children who become paralyzed or die from polio are “martyrs” because they refused to be tricked by a “Western conspiracy.”

Pakistani militants have also propagandized that Western-made vaccines contain pig fat or alcohol, which are both forbidden in Islam.

Militants in Pakistan have kidnapped, beaten, and assassinated dozens of vaccinators or their armed police escorts in recent years in a bid to stop local anti-polio campaigns.

Frud Bezhan is a correspondent for RFE/RL who covers Afghanistan, Iran, and Pakistan.