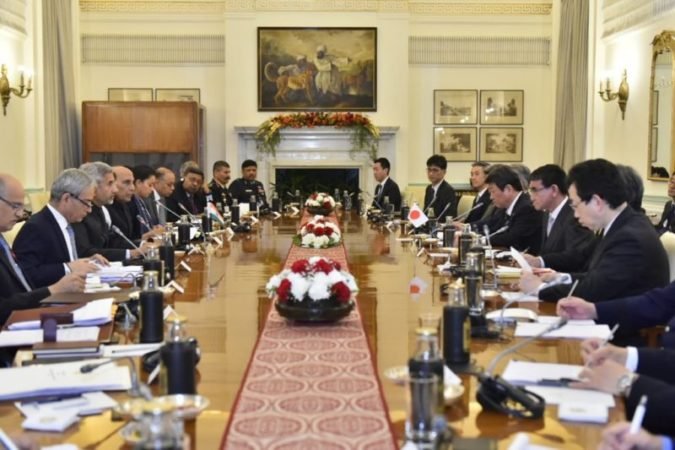 India and Japan recently concluded their maiden 2+2 Defence and Foreign Ministerial Dialogue wherein New Delhi’s Defence and External Affairs Ministers, Rajnath Singh and Dr S. Jaishankar met their Japanese counterparts, Motegi Toshimitsu and Kono Taro in Delhi. The 2+2 Dialogue mechanism is crucial because it provides a platform for partners to discuss and assess the direction and robustness of their strategic partnership, and overcome layers of bureaucracy to analyse how the two countries are advancing their defence and wider bilateral ties to deal with common security challenges.

This particular ministerial-level dialogue with Japan was especially important given that New Delhi and Tokyo have only conducted this previously at the foreign-secretary level. The only other country with which India has such an engagement at the highest level of ministerial involvement is with the USA. India has twice held such a meeting—albeit at the secretary-level— under the 2+2 framework with Australia. Such a consistent effort at sustaining and upgrading engagement with the uppermost echelons of power of its quadrilateral strategic partners belies doubts about India’s intent to enhance its partnership with these ‘Quad’ countries. This 2+2 meeting precedes a two-day summit set to take place this month in Guwahati, where Prime Minister Modi will be hosting Shinzo Abe. The summit will focus on the Act East Forum that lays stress on their joint-efforts in enhancing connectivity in India’s North-East— a major facet of their Indo Pacific cooperation.

Unsurprisingly, security and sovereignty of the Indo Pacific countries and maintenance of freedom of navigation and overflight in this critical region was the focus of the meeting, given that it has become the key driver of their bilateral ties over the last few years. In fact, the term Indo-Pacific itself has Indo-Japanese roots. Japan’s geographical understanding of the Indo Pacific comes the closest to India’s; by identifying the Indo Pacific as a region stretching all the way to the Eastern coast of Africa, Japan’s iteration of the Free and Open Indo Pacific (FOIP) covers what the Indian Navy in its Maritime Security Strategy sees as areas of primary interest to India’s national security. That is quite different from the US’s “Hollywood to Bollywood” mapping of the region wherein the littorals westwards of India’s western coast don’t fall under the responsibility of its Indo Pacific Command (INDOPACOM).

Even when they refrain from making explicit references to the People’s Republic of China (PRC), India-Japan cooperation in the Indo Pacific is primarily aimed at the threat the aggressive rise of authoritarian Beijing poses to regional stability and the rules-based order in the region. However, their defence cooperation, capacity building efforts and joint development of connectivity-enhancing infrastructure projects are also undertaken with a common view to increase the effectiveness of their counterterrorism and HADR operations The two countries have been conducting bilateral military exercises such as Shinyuu Maitri and Dharma Guardian to increase joint mobility and interoperability of their air forces and armies respectively. To enhance their naval interoperability with partner navies and increase their Maritime Domain Awareness, the two have been engaging in trilateral and multilateral naval exercises— including MALABAR and MINEX with the US Navy.

The two countries have been negotiating the Acquisition and Cross-Servicing Agreement (ACSA), the signing of which will provide a significant impetus to the armed forces of both the countries allowing them to share logistics and seek mutual base access, thereby enhancing their power projection capabilities and their ability to work together during joint operations. India already has similar arrangements in place with the US, France and South Korea. India would also soon be welcoming a Japanese Liaison Officer at the Indian Navy-Indian Coast Guard managed Information Fusion Centre – Indian Ocean Region, an information collating centre in Gurugram that gathers, monitors and analyses information on the maritime situation in the Indian Ocean.

Although, both India and Japan recognise the ‘ASEAN centrality’ of the Indo Pacific and promote economic connectivity with and across South East Asia, they recognise the limits of multilateral initiatives that advance that. When India recently pulled out of the Regional Comprehensive Economic Partnership (RCEP) fearing Chinese-domination over trade in the region, Tokyo indicated that Japan itself seeks re-negotiations of the deal to ensure the trade pact does not unfairly benefit China. Interestingly, at this 2+2 Dialogue, Japan and India were able to discuss their individual security concerns with each other: proliferation in the context of North Korea, and terrorism out of Pakistan. While Japan has often chided Pakistan for its support of terror, what is noteworthy for Indian observers is New Delhi’s condemnation of Pyongyang during this 2+2 discussion of Indo Pacific security for North Korea’s recent launches of ballistic missiles. Whereas countries such as the US and Australia have identified North Korea as a threat actor in the Indo Pacific, India has not made such an assertion.

Jyotsna Mehra is a Consulting Editor at The Kootneeti on Indo Pacific and Geopolitics. She's also a Pacific Forum Young Leader, researching India’s rise and foreign policy in the Indo Pacific. Jyotsna graduated with an MSc in Modern South Asian Studies from the University of Oxford in 2018. She can be reached at jyotsnamehra@yahoo.co.in || Twitter: @Jyotsna Mehra