Chinese Dragon at the Himalayan Kingdom: A Wakeup call for India? 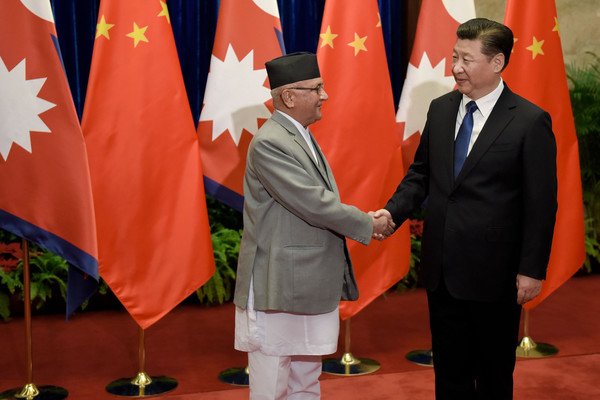 During my month-long volunteering to Nepal in August 2019, the city of Kathmandu was still in ruins from the aftermath of the 2015 earthquake that adversely affected human lives, the economy, livelihood, development, and infrastructure of the country. With the country unable to recover from the devastation on its own, I was not surprised to see most of the renovation activities being financed by China. The contribution of India, its immediate neighbour, was barely noticeable amidst the Chinese hustle.

On October 12, 2019, the much-anticipated state-visit by Chinese President Xi Jinping took place, breaking the 23 years hiatus by a Chinese leader in any Himalayan country. The last visit was carried out back in 1996 by the then-Chinese President Jiang Zemin. Therefore, Xi’s visit was a significant event for both countries in order to enhance their bilateral relations. Meeting his counterpart Bidhya Devi Bhandari in Kathmandu, the leaders agreed to cooperate in various sectors to elevate Nepal from the ongoing situation. Xi pledged to invest in infrastructure and improving road connectivity while asking for Nepal to cooperate with China. In return, Bhandari reiterated Nepal’s commitment towards China through the ‘One-China policy’, stating it will not allow any forces to use its territory against China. “China is ready to work with Nepal to implement the consensus of our leaders, scale new heights in our friendly cooperation,” China’s Foreign Ministry said, heralding a “new chapter for relations.”

Nepal is a small landlocked Himalayan country located between two regional powers India and China. It has been ranked as one of the poorest countries in Asia, with a quarter of its 30 million-strong population living on less than 50 cents a day and some 8 in 10 Nepalese living in rural areas, depending on subsistence agriculture for survival. Its geographical features pose major challenges to its development, impeding economic growth, with its internal resources insufficient to suffice the requirements of the exploding population. The country has also been a victim to a number of natural disasters. A devastating earthquake that struck Nepal in 2015 killed almost 9,000 people, injuring 22,000 and displacing many more. Cut to after the disaster,  the Nepalese Government laid out a highly controversial constitution, which was highly criticized for its treatment of ethnic minorities and women.

The turn of events that followed completely changed the environment of Nepal. There were violent and deadly protests in the country’s southern border with India, leading to transport blockade between the two countries. Bilateral trade was affected terribly and there was an acute shortage of food and fuel supply, awakening memories of a year-long blockade by India in 1989 for buying military hardware from China. All in all, the condition of Nepal could only go downhill from here.

Indo-Nepal ties hold a historical significance. It goes back to the 1950 Peace and Friendship Treaty and the Treaty of Trade and Commerce that established robust ties between the two countries. As bilateral trade ties increased, multiple other trade treaties were signed in the 1970s and the 1980s. There was also an increase in the number of joint investments in 1978  which further deepened cooperation between them. However, tensions in bilateral relationship surfaced after the Madhesi crisis in 2015, when the Madhesi community blocked important border crossings for trade with India to protest for better representation in Nepal’s constitution. With India denying any role in the blockade despite Nepal asking India to take action on it, it blamed the latter stating internal tensions for the same. Among many theories regarding the issue, some believe that the blockade was imposed by India in response to not having a bigger role in the drafting of Nepal’s Constitution. India has historically played an active role in Nepal’s internal politics. Its support of the transition from a monarchy to multi-party democracy and helping end a decade-long civil war are few of the many instances which prove that India has had a significant influence in Nepal.

India’s urge to form a separate province for Madhesis, as the people of Indian ancestry living along the Terai plains of southern Nepal are called, did not go well with Nepal. It was, therefore, rejected by Nepal to avoid identity-based provinces. This created a hostile environment and sourness between the countries, as Nepal blaming India for funding Madhesi leaders. The course of the relationship changed substantially, with Nepal’s dependence on India diminishing gradually.

Since then, China has taken advantage of the situation and have initiated bolstering ties with Nepal through the various course of actions, one aspect that China is exceptionally good at. Also, with the present government under Prime Minister K.P. Sharma Oli (leader of the Nepal Communist Party), Nepal has broadened its ties with China even more, while India seems to be lost in the game.

With Nepal’s ratification to Beijing’s Belt and Road initiative in 2017, it has given greater leverage to China in the country, which will give it easy access to keep a check on Tibet and India. This has changed the geopolitics in the region as India and China struggle to maintain greater prominence than the other in the country.

Like every other vulnerable country in Asia, China has and is investing billions of dollars in Nepal behind the guise of assisting in the development of the country. However, there is a heavy price to pay in case the countries cannot meet the terms and conditions put forward by China: the dreadful Debt-Trap Policy. Sri Lanka’s Hambantota port is the most vivid example. Unable to pay the debt back to Beijing for constructing the port, they negotiated to hand over the port and 15,000 acres of land around it for 99 years. This has given China closer proximity to India, its major rival in the Indian subcontinent, also giving it leeway in the much advantageous waterway.

Collaborating with China, needless to say, comes with compromises. Jinping spoke on reviving the Arniko Highway linking Kathmandu with Tatopani transit point which was shut down following the devastating earthquake of 2015, constructing the Kerung-Kathmandu tunnel road, supporting education sector and urban development in the country, constructing the Rasuwagadhi-Kathmandu-Lumbini railway line and most importantly, assisting in the post-quake reconstruction by promoting ‘Visit Nepal Year 2020’.

All things considered, Beijing has evinced considerable interest in supporting Nepal in all aspects. The backstory being, the aforementioned links makes the Chinese markets accessible to Nepal. It also accentuates Beijing’s manoeuvring in south Asia for defence and transit projects. Sometimes, the compromise could widen out to internal politics too. During his visit, Xi briefed the ruling party how to bolster their position through “full and strict governance”. But as China’s influence rises in South Asia, there have been concerns about whether dealing with President Xi will mean losing sovereignty. Again, Sri Lanka’s Hambantota Port can be used as an example here. Nepal’s participation in the Belt and Road Initiative (BRI) goes beyond physical connectivity to include connectivity of ideas, trade, people, finance and so much more. It is one of the most important countries for a new trans-boundary railway under the project that would link China to the subcontinent.

In the coming years, Nepal could also witness an exodus of 20,000 exiled Tibetans living in the country, considering the enmity between China and Tibet. And this could happen sooner than expected as President Xi and PM Oli discussed an extradition treaty for the same. However, to much relief, Nepal has postponed the treaty, for now, citing reasons of possible infringement of sovereignty. But when it comes to China, it surely knows how to get things done.

China has already established its businesses all over Nepal. It has managed to break the sole dependence on Indian internet providers with Chinese internet bandwidth. The country sees thousands of Chinese tourists every year and Chinese-language institutions are proliferating with time. Hundreds of students travel to China more than India for education. India needs to pay heed to this as a sign of warning and buckle up to regain its lost status.

India, which used to secure the position of the highest investor in Nepal until a few years back has been replaced by China with the latter amounting to 60% of foreign direct investment (FDI) commitments (US$79.26 million). China is the single largest FDI source for Nepal with its relevance not just in small projects, but in considerable ones, like airports, roads, transmission lines, railway, optical fibre network and many more. India now ranks second with US$36.63 million, followed by the US and Japan. This has come as a worry to India because it does not enjoy the same impact as it had, not just in Nepal but with almost all its neighbours. Losing its influence in Nepal would be a huge setback for India as it is an important buffer state with China.

India needs to wake up!

It is quite comprehensible now that India is falling behind in its diplomacy and finesse as compared to China. It should analyse the areas it is lagging on and work on it. Firstly, it should respect the sovereignty of Nepal. Just because Nepal is reliant on it does not mean it should interfere in the internal politics of the country. Being the ‘Big Brother’, it should let Nepal perform on its own and not impose its beliefs and opinions on it.

Increasing its investments and assistance to Nepal could be another aspect where India can work on. With Nepal struggling to revive itself from the destruction of 2015, India could give significant assistance in developmental activities. Backing Nepal in international forums like the United Nations could help India win back the trust. The ever-changing dynamics of geopolitics due to the presence of China are inevitable and India should take extra measures to be on par with it with minimum assertiveness. Or else, the Indo-Nepal friendship that has managed to hang on all these years could only remain in history books.