Turkey and China tie themselves in knots over Syria and Xinjiang 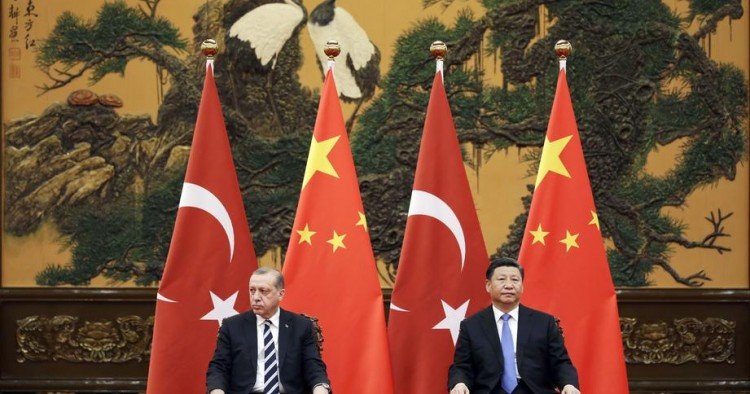 Turkey’s ambassador to China, Emin Onen, didn’t mince his words this week when he took his Chinese hosts to task for failing to support Turkey’s military campaign against a Kurdish militia in Syria.

Speaking in Turkish through a translator at a news conference at his Beijing embassy, Ambassador Onen implicitly put China on the spot by calling on it to stand with Turkey in its fight against political violence.

In doing so, Onen was laying bare long-standing strains in Turkish-Chinese relations as well as contradictions that link Turkey’s long-standing refusal to fully recognize Kurdish rights to China’s brutal crackdown in its troubled, north-western province of Xinjiang.

Chinese officials have long sought to prevent Turkey from speaking out on the crackdown by privately arguing in discussions with their Turkish counterparts that China’s massive effort to fundamentally alter the belief system of Turkic Muslims, packaged as a fight against political violence, was no different from Turkish attitudes towards the Kurds.

Turkey has justified its decades-old policy in predominantly Kurdish southeastern Turkey and its more recent interventions in Syria as a struggle against the Kurdish Workers Party (PKK) that has been designated a terrorist organization by Turkey, the United States and the European Union, and its Syrian affiliate, the People’s Protection Units (YPG).

The PKK has waged an insurgency in south-eastern Turkey for more than three decades. Tens of thousands have been killed in PKK attacks and Turkish military operations.

The YPG, which has not been designated by either the US or the EU, served in recent years as the United States’ ground troops in the battle to defeat the Islamic State’s Syria-based Caliphate.

“What we hope for is that China, whether internally or externally, is an anti-terrorist nation. They are a member of the (United Nations) Security Council, so they should understand our present situation,” Onen said.

“Certainly, we know that China is a country that is fighting against terror … We are also fighting against … (political violence) and it’s one of the most important issues,” Onen went on to say.

Onen was responding to what amounted to a Chinese condemnation of the Turkish incursion into Syria when Chinese foreign ministry spokesman Geng Shuang, urged “Turkey to halt military action and to return to the right track, resolving the issue with political solutions.”

China had earlier called on Turkey to “exercise restraint,” insisting that Syria’s “sovereignty, independence and territorial integrity must be respected and upheld.”

The stakes for both Turkey and China are high.

Both are likely hoping that Russian execution of an enhanced ceasefire initially negotiated by US vice president Mike Pence on a visit to Ankara last week will enable them to avoid a further deterioration in relations. Russia took ownership of the Syrian process during talks on Tuesday between presidents Vladimir Putin and Recep Tayyip Erdogan.

Turkey, home to the largest Chinese Turkic Muslim exile community, and long a supporter of political and cultural rights for Uighurs, the predominant Turkic Muslim ethnic group in Xinjiang, has on occasion breached the Muslim’s world’s wall of silence about the Chinese crackdown.

If Turkey, one of the Islamic world’s most powerful nations that compete with Saudi Arabia and Iran for leadership, were to revert to sustained criticism of the Chinese crackdown, it would make it more difficult for other Muslim states to maintain their silence or, in some cases, endorsement of Chinese policy.

It would ironically align Turkey with the United States, which last week imposed sanctions in a bid to force Turkey to halt its Syrian military campaign. The US, unlike the Muslim world, has been vocal in its condemnation of the Chinese crackdown in Xinjiang.

Taking China to task on Xinjiang is risky business, certainly for a country that has seen its economy falter.

Turkey has been counting on China to help it resolve its economic problems.

China transferred in June on the eve of Turkish elections US$1 billion to Turkey as part of a Turkish lira-Chinese yuan currency swap. China, which sees Turkey as a key node in its Belt and Road initiative, has further pledged US$3.6 billion in funding for energy and telecommunications infrastructure projects.

Deng Li, China’s ambassador to Turkey, warned in March that public Turkish criticism of China’s Xinjiang policy “will negatively affect mutual trust and understanding and will be reflected in commercial and economic relations.”
Ambassador Li issued his threat after Turkish foreign minister Mevlut Cavusoglu and his ministry spokesman, Hami Aksoy, in a rare expression of anti-Chinese sentiment used harsh language to condemn events in Xinjiang where some one million Turkic Muslims are believed to have been incarcerated in re-education camps and/or pushed into forced labour.

Calling the crackdown an “embarrassment to humanity,” Mr Aksoy demanded that Chinese authorities respect human rights of the Uighurs and close what he termed “concentration camps.”

Chinese Foreign Minister Wang Yi called on Turkey two months later to support China’s policy in Xinjiang in a bid to “safeguard the overall situation of the strategic cooperation between the two countries.”

The strains in Turkish-Chinese relations were put on public display in July when China’s state news agency Xinhua quoted visiting President Erdogan as saying that people in Xinjiang “live happily.”

Turkish officials insisted that President Erdogan had expressed the hope that people in China would “live happily in peace and prosperity,” not that they were living happily.

Chinese foreign ministry spokeswomen Hua Chunying, clearly believing that this time around it would be Turkey rather than China that blinks first, insisted on Tuesday that “we called on Turkey many times to stop its military action. We hope all sides will form a synergy to combat terrorism, advance the political settlement process of the Syrian issue, and jointly safeguard peace and tranquillity in the region.”

It’s a synergy built on sand as long as Turkey and China cloak their refusal to come to grips with minority rights in counterterrorism terms that are opportunistically called into question whenever they contradict their geopolitical ambitions.