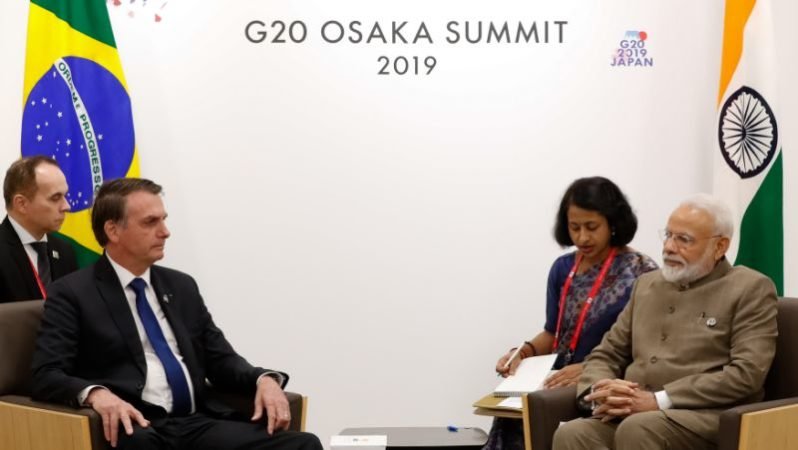 “In a world of complex threats, our security and leadership depend on all elements of our power- including strong and principled diplomacy” -Barack Obama

The Republic of India and the Federative Republic of Brazil share a close and multifaceted relationship at bilateral levels as well as in plurilateral fora such as G-20, BRICS, BASIC IBSA to name a few. The dialogue between Brazil and India as sovereign countries was initiated after World War II when Brazil and India emerged as giant nation-states.

The new nations shared commonalities: similar processes of postcolonial nation-building, a multicultural society, and a predominantly tropical geography with vast natural resources; both had also adopted a federal system to accommodate their democratic ideals.

Several Indian private corporations in the pharmaceutical, software, and engineering sectors have established joint ventures with local counterparts in Brazil. Similarly, Brazilian companies are operating in partnership with electronic and alcohol distillery sectors in India. A government program to blend ethanol with gasoline in Brazil has proved successful. Technological collaboration is also being explored in the areas of satellite construction, climate, marine sciences, biotechnology, e-banking, and e-governance. This June at the G-20 summit, PM Modi and President Bolsonaro held wide-ranging discussions on the bilateral relationship, especially cooperation in trade and investment, agriculture and biofuels in the context of climate change.

It is said that innovation is the change that unlocks new value. With India touching new heights in terms of space technology and successfully launching and venturing mission such as Gaganyan, Mangalyan and Chandrayan, India is striving hard towards its mission of being recognized as a developed nation and Brazil is supporting India’s bid and vice versa for a permanent seat in the UNSC through the G-4. In Brazil as well-favoured agreements on nuclear energy, phytosanitary, pharmaceuticals, biotechnology and information technology have seen immense progress.

But still, the nuclear agreement for both the counties is below potential. Of late both the nation’s have been striving hard and working towards space technology and investing, researching and developing on the present and future aspects of Artificial intelligence. In India, the NITI Aayog has drawn up a plan for creating an institutional framework for AI in the country. The proposal entails investing in funding five institutes or centres of research excellence (CORE), 20 international centres for transformational AI ( ICTAI) and setting up a cloud computing platform called AIRAWAT that can be accessed by anyone.

The government aims to position India as a trailblazer for emerging economies when it comes to AI and is confident that the technology can help address some of the key challenges in social sectors such as education, health, agriculture, urbanisation and mobility.

Agriculture is a major driving force in the GDP of both the nations with agriculture contributing roughly around twenty percent to India’s GDP and approximately forty-eight percent of the labour being absorbed as a source of employment. Since both the nations have a tropical climate commonality comes in terms of the produce of a few major products such as coffee, wheat, rice, corn, sugarcane etc. Agricultural growth in Brazil is nine percent more than India while the per capita agricultural growth is eleven percent more. In terms of farmworkers, India has twenty-two times more farmworkers than Brazil owing to its excessive population and the consumption by Indians is eleven times more than those of their counterparts. The agricultural trade between the two includes cocoa, lentils, onion, potatoes, dairy products, citrus, jute, tea, fish, soybeans etc.as India produces seventy-four percent more than Brazil. It can be inferred from the figures that both the countries have disguised unemployment in the agricultural sector and although after producing such an extensive and large range of products, poverty is prominent in both countries.

The problem here lies not just in the sheer number of people that the government has to feed, but the fact that the product is not able to reach all hands and feed each mouth. A seemingly simple solution would be to move this extra labour into some other sector where they can be better suited and work on a bottom-up approach when it comes to the agricultural produce. Rather than meddling with middlemen who hassle and take a huge cut of the produce, the governments should aim and work towards a system where the entire share is distributed to the farmers in a fair way of the product as per the market rates. Another measure could be to harvest those crops that yield more in terms of both produce and money.

Climate change is a terrible problem, and it deserves a huge priority. In the words of Ban-Ki Moon,” climate change does not respect borders, it does not respect who you are – big or small, rich or poor”. This is the reason why the climate and environmental changes are global challenges and require global solidarity. The impending and huge fires in the Amazonian forests also known as the lungs of the earth have had a huge impact on not just Brazil and it’s environment but is hazardous for the global climate.

Forest fires are a very common sight in India and Brazil during the summer months and whatever the reason may be, manmade or natural, the result is exalting. The loss is not just of wildlife and forests, but the air around becomes polluted and the catastrophic results will be a huge burden for the present and future generations to bear. If we go by the latest reports of the UN, we are already late in starting to make a change in our lifestyle and helping the environment in any possible way. But as they say, better late than never, because if mankind has to sustain then sustainable way of life has to be adapted and worked upwards so as to make a difference and see the results and get some respite from the incessant hot and fiery summers to sub-zero winters, from flooded monsoons to raging forest fires and from persistent droughts to melting glaciers.

Saving the planet, lifting people out of poverty, advancing economic growth etc. are the same right across borders. We must connect the dots between climate change, water scarcity, energy shortages, global health, food security and women empowerment. Solutions to one problem must be solutions for all and these solutions should have been out yesterday with their implementation being done today. Since we as a global community are already running late, it is high time that leaders of the growing economies take charge of their nations and allies and work towards a sustainable future.

The growing population is taxing the present stock of non-replenishable sources of energy at a rate that will wipe such sources for bad pretty soon. To overcome the loss of fuels of each and every kind, we are tapping on the renewable resources of energy, but the pace is still slow and we have a long way to keep up. In terms of monetary expenses, research and development a lot of studies have been done on optimizing the use of renewable resources. Yet, we are not as accomplished as we should have been.

One of the reasons could be that such sources although present in abundance are difficult to harness and even if we are economically capable, we are not yet technologically sound to develop and exploit the resources for our use. In India, although sunlight and rainfall and wind are abundant, yet we haven’t tapped the solar or wind energy to its full efficiency nor have we worked on the rainwater harvesting systems across the country. A significant reason is that India as is Brazil is largely dependent on the manufacture of solar-powered goods from other nations and haven’t yet produced a single indigenous wire related to the same. Thusddroughts and floods are a common sight. With regular bilateral talks and trade agreements being signed on agriculture and environment between the two nations, the first step should be towards building and manufacturing the material for renewable energy.

Secondly, both the countries should tap their natural resources such as deserts and rivers and wind farms that can be used as an alternative source. Thirdly, the investment should be more towards the research and development of renewable resources using AI and both nations should collaborate on this.

India and Brazil are not only strong allies but share a deep history and cultural ties that go way back. The traditions and heritage as they pass on from generations and are shared through cultures make the nation as we know them today. But in this dynamic and global era, a plethora of changes need to be advocated on education and technology and harness them not just for a bilateral benefit, but for global use and betterment of all mankind.