Singapore Convention on Mediation: An attempt to halt trade wars? 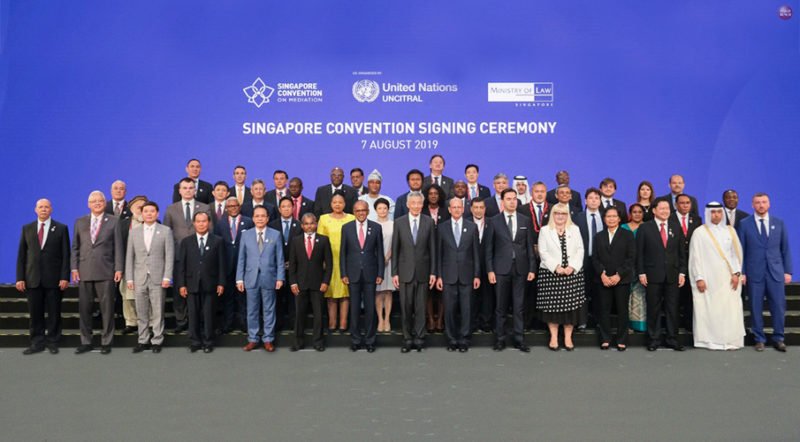 The emergence of Singapore as a viable, neutral and favourable spot globally is the hallmark of success, it has achieved in recent times. Its geostrategic location, friendly and transactional relations with neighbours, regional powers and great powers, crucial trading hub and investment destination have transformed this city sate into a truly global cosmopolitan place. In the backdrop of the political demonstration at Hong Kong, a rival contender of Singapore in terms of business output and activities is rapidly losing its acquired formidable position. But the Chairman of Hong Kong’s electronic Business related Arbitration and Mediation Centre, said that the naming of convention and establishment at Singapore doesn’t pose much threat to Hong Kong. He expressed confidence in Hong Kong current drafting of local mediation and apology ordinances, as well as the setting up of an accreditation agency. He strongly believes that Hong Kong would remain the leading international resolution dispute centre in the Asia-Pacific region. Also, Singapore has recently hosted a negotiation cum meeting between US president and N. Korean leader Kim Jong-Un. The signing of a convention on meditation named after Singapore and signed on 7th of august is certainly another notable achievement of this city-state globally.

A total of 46 countries including two economic giants locked in a trade war, US and China together with two rival neighbours Japan and South Korea and India all set to signing Convention of Singapore mediation. European Union is supposed to sign in the next phase. With the signing of the treaty, it would be easier to enforce mediation settlements across borders. Singapore has established itself as an international dispute resolution centre and has set up the Singapore International Arbitration Centre and the Singapore International Commercial Court. Also, the UN’s Commission on International Trade and Law has signed a memorandum to establish an academy in international dispute resolution in Singapore. The signing ceremony for the United Nations Convention on international settlement agreements resulting from mediation will be held in Singapore. It will be co-organized by the UNCITRAL and the Singapore Ministry of Law; this globally significant event will open with a formal address by Singapore PM Mr Lee Hsein Loong and United Nations secretary for legal affairs Mr Stephen Mathias. The signing ceremony is a continuation of a series of events related to dispute resolution taking place from 2-8 of august. Speaking at the event, Singapore PM said the protocol demonstrated that the countries are capable of achieving consensus through effort and creativity, and are open to binding commitments. Also, he did mention the contemporary challenges facing multilateralism, “existing multilateral institutions are not perfect, many are in need of urgent reform, suffer from a loss of confidence, or have practices and structures that are no longer fit for purpose. And the solution would not be to abandon these bodies but to improve them through reform and bringing them up to date.
Stephen Mathias added that the agreement helped unify mediation rules and remove uncertainty in enforcing mediation agreement.

The real aim behind this convention is to ease global commerce and promote’ effective and alternative resolution’, it will involve only commercial settlements agreements and countries that sign it will have to enforce the mediation agreement in courts. A priority is to keep commercial disputes out of local courts, where litigation would be costly and could be in favour of local operators.  Singapore Home and law minister K. Shanmugam said: these are large economies, they have very big investments overseas and I think they understand the significance of making sure that there is an international rules-based mechanism for dealing with disputes.  This new treaty was adopted in December last year when the 73rd session of the UN General Assembly passed a resolution to adopt the UN Convention on International Settlement Agreements resulting from mediations. This will provide a uniform and efficient framework for the enforcement agreements resulting from mediation and for allowing parties to invoke such agreements. The convention will be in the complementary the previous agreements like the Hague Convention on the choice of court agreements and the New York Convention on the recognition and enforcement of foreign arbitral awards (1958). It will certainly give business and investors more assurance and will also help international trade flows by making it easier to enforce high-value, complex, cross-border commercial dispute settlements. Also, to be noted that the convention defines two additional grounds upon which a court may, on its own motion, refuse to grant relief. Those grounds relate to the fact that a dispute would not be capable of settlement by mediation or would be contrary to public policy.

According to Indian official statement, signing of the convention will boost the confidence of the investors and will provide a positive signal to foreign investors about India’s commitment to adhere to international practice on alternative dispute resolution mechanism and thus helped in ease of doing business ranking. With the aim to achieve 5 trillion economy sizes, fast and feasible resolution of dispute is the need of an hour, corporate lawyers mentioned. Also, the future prospects of mediator community to grow exponentially with the tune of changes.

The blueprint of the convention was firstly suggested by the US in 2014, and its development assigned to a working group of the UN’s Commission on International Trade Law.

Analysts believe that mediation is a faster and cheaper way to resolve commercial disputes than arbitration, which has been the preferred method of dispute resolution over the years. In arbitration, decisions can be imposed on quarrelling parties by the arbiter, but in mediation, the parties involve voluntarily agree. In this way, Mediation preserves the business relationship, because at the end of the day you come to an agreement through consensus.

At present, parties who conclude mediate settlement outside the context of the court proceeding or arbitration can generally only enforce the settlement as a contract. This involves first obtaining a court judgment for breach of contract and then enforcing the judgment in a chosen direction, which is certainly a time taking and costly process.

The proposed Singapore Convention excludes personal consumer disputes and those relating to family, inheritance and employment law. It also excludes settlement reached and enforceable as part of arbitration judgment or award. Despite a range of apprehensions and closed observations by experts, the convention has the potential to expand as a powerful tool to expand its usage around the world.