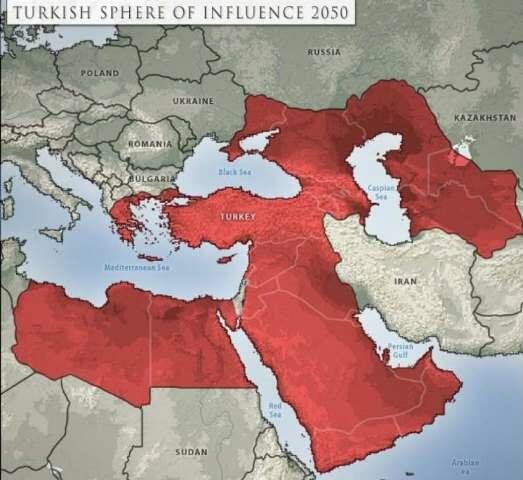 EXECUTIVE SUMMARY: A nationalist Turkish television station with close ties to President Recep Tayyip Erdoğan has dug up a 12-year-old map that projects Turkey’s sphere of influence in 2050 as stretching from southeastern Europe on the northern coast of the Mediterranean and Libya on its southern shore across North Africa, the Gulf, and the Levant into the Caucasus and Central Asia.

Buoyed by last year’s defeat of Armenia by Azerbaijan, TGRT, a subsidiary of Ihlas Holding, a media and construction conglomerate that has won major government tenders, used the map to advance a policy that has long constituted the agenda of some of Erdoğan’s closest advisors.

The broadcasting of the map, first published in a book authored by George Friedman, the founder of Stratfor, an influential American corporate intelligence group, followed calls by pan-Turkic daily Turkiye, Ihlas’s daily newspaper (with the fourth-largest circulation in Turkey), to leverage the Azerbaijani victory to create a military alliance of Turkic states.

In a country that ranks second only to China as the world’s foremost jailer of journalists, Ihlas Holding would not be pushing a pan-Turkic, Islam-laced Turkish regional policy without tacit government approval at the very least.

The media group’s push reflects Turkish efforts to capitalize on the fact that Turkey’s latest geopolitical triumph with Azerbaijan’s Turkish-backed victory is already producing tangible results. The military victory has positioned Azerbaijan, and by extension Turkey, as an alternative transportation route westward that would allow Central Asian nations to bypass corridors dominated by either Russia or Iran.

Turkmenistan, recognizing the changing geopolitical map, rushed in January to end a longstanding dispute with Azerbaijan and agree on the joint exploitation of Caspian Sea oil deposits. The agreement came on the heels of a deal in December for the purchase from ENI Turkmenistan of up to 40,000 tons of petroleum a month by the State Oil Company of Azerbaijan Republic (SOCAR).

The agreement could boost the completion of a Trans-Caspian natural gas pipeline (TPC) that would feed into the recently operational Southern Gas Corridor (SGC), bypass Russia and Iran, and supply Greece and Bulgaria via the former Soviet republic.

Last month, Azerbaijan agreed with Turkmenistan and Afghanistan to develop the Lapis Lazuli transport corridor, which would link the war-ravaged country to Turkey. At about the same time, Kazakhstan began exporting copper cathodes to Turkey via Azerbaijan in a first step intended to capitalize on the Caucasian nation’s position as a transit hub.

Azerbaijan and Turkey’s newly found advantage has rung alarm bells among Russian and Iranian analysts with close ties to their respective governments even though the TGRT broadcast may have been primarily intended to whip up nationalist fervor at home and test regional responses.

Russian and Iranian politicians and analysts appeared to take the broadcast in that vein. Nonetheless, they were quick to note that Friedman’s projection includes Russia’s soft underbelly in the northern Caucasus as well as Crimea, while Iranians noted that the Turkish sphere of influence would border on Iran to the north, south, and west.

In recent months, Turkey and Ukraine have agreed to cooperate in the development of technologies with military applications related to engines, avionics, drones, anti-ship and cruise missiles, radar and surveillance systems, robotics, space, and satellites. Turkey has refused to recognize Russia’s annexation of Crimea, home to the Crimean Tartars, and criticized Russian support for Ukrainian rebels.

Most Russian commentators sought to downplay the significance of the map, leaving Andrei Krasov, deputy chairman of the defense committee of the Russian parliament’s lower house, to warn, “If they [the Turks] want to test the strength of the Russian spirit and our weapons, let them try.”

With Iran excluded from TGRT’s and Stratfor’s projection of Turkey’s emerging sphere of influence, Iranian officials and analysts have largely not responded to the revival of the map—yet Iran’s actions on the ground suggest that the Islamic Republic had long anticipated Turkish moves even though it was caught off guard by last year’s Azerbaijani-Armenian war.

For one, Iran has in the past year sought to bolster its military presence in the Caspian Sea and forge close naval ties with the basin’s other littoral states: Russia, Azerbaijan, Turkmenistan, and Kazakhstan.

Viewed from Tehran, TGRT’s broadcasting of the Stratfor map was the latest in a series of provocative Turkish moves.

They include Erdoğan’s recital of a nationalist poem while attending a military parade in Azerbaijan that calls for reuniting two Iranian ethnic Azeri provinces with the former Soviet republic, and the posting on Instagram by state-run Turkish Radio and Television’s Arabic service of a map depicting Iran’s oil-rich province of Khuzestan, with its large population of ethnic Arabs, as separate from Iran.

The Instagram posting came days after the disclosure that Habib Chaab, a leader of the Arab Struggle Movement for the Liberation of Ahvaz, or ASMLA, had been kidnapped in Istanbul by an Iraqi Kurdish drug baron in cooperation with Iranian intelligence and transported to Iran.

“Those who have greedy eyes on the territories this side of the Aras River had better study history and see that Azerbaijan, specifically the people of Tabriz, have always pioneered in defending Iran. If Iran had not helped you on the night of the coup, you would have had a fate like that of former Egyptian President Muhammad Morsi,” protesters chanted in front of the Turkish consulate in Tabriz, the capital of Iran’s East Azerbaijan province.