The impact of the US-China Trade war 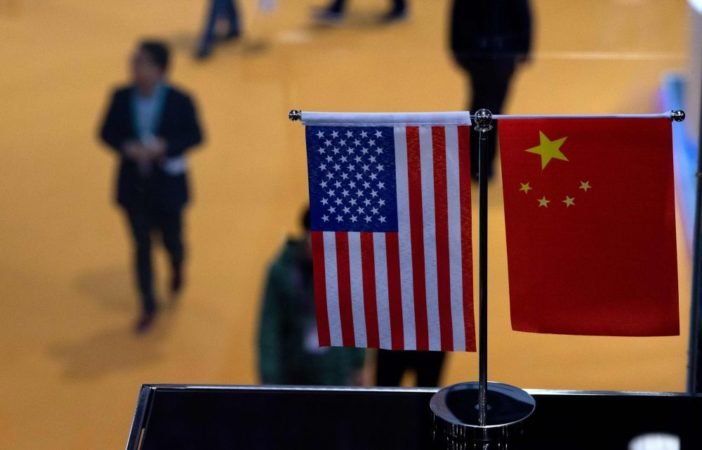 (FILES) In this file photo taken on November 6, 2018 a Chinese and US flag are displayed at a booth during the first China International Import Expo (CIIE) in Shanghai. - US-China trade talks aimed at ending a damaging tariff war will resume from February 19, 2019 in Washington, the White House has announced. (Photo by Johannes EISELE / AFP)
PDF Button

It is highly unlikely, that any tangible solution to the Trade war between Beijing and Washington will emerge in the short run. In May 2019, Trump increased the tariffs on commodities worth 200 Billion USD, from 10% to a whopping 25%. So far, the US has imposed tariffs of about 250 Billion USD on China. While China has retaliated with tariffs on US goods estimated at well over 100 Billion USD (110 Billion.)

It would be pertinent to point out, that trade disputes have not been restricted only to Washington and Beijing.  The imposition of tariffs has been a bone of contention with US allies including Japan.

In response to tariffs imposed by Washington, New Delhi retaliated and has imposed tariffs, estimated at 200 Million USD, on 29 commodities (including Apples, Almonds and Chickpeas). India’s decision was a response to US’ decision to impose tariffs, of 10% and 25% on Aluminium and Steel in May 2018. Last year, New Delhi refrained from imposing tariffs but did raise import taxes on a number of US goods to 120%, after Washington declined to exempt New Delhi from higher steel and aluminium tariffs. The key propelling factor for India’s recent imposition of tariffs was the US decision to scrap the Generalized System of Preferences (GSP) for India from June 5, 2019. India benefitted immensely from this scheme, as it allowed duty-free exports of up to $5.6 billion from the country.

Even though no solution is in sight, there are a number of lobbies in the US, especially Trade groups and US businesses which have been repeatedly urging the Trump Administration to find a solution to the current impasse with China.

Only recently, for instance, 600 companies, including Walmart in a letter to the U.S. President Donald Trump urged him to resolve trade disputes with China, stating that tariffs were detrimental to the interests of American businesses and consumers. The letter was sent as part of the ‘Tariffs Hurt the Heartland’ campaign.

To underscore the detrimental impact of trade wars on the American economy some important estimates were provided. The letter stated that tariffs of up to 25% on 300 billion USD worth of goods, could lead to the loss of 2 million jobs. Costs for an average American family of 4 would also rise to an estimated 2000 USD, if such tariffs were to be imposed.

A number of surveys and reports illustrate the profound challenges which the US economy is facing as well as a drop in FDI from China.

According to a survey released by the China General Chamber of Commerce USA,investment by Chinese companies in the United States has witnessed a significant decline since 2016 ( including a sharp drop in 2018 and early 2019)

A number of important events have been held recently, where efforts were made to draw more Chinese investments to the US. One such event was the Select USA Summit. Speaking at the Summit, US Commerce Secretary Wilbur Ross stated:

‘We welcome investment from any place as long as it’s investment that poses no challenges for national security,”

US states and FDI

What was clearly visible at the Select USA Summit was the fact, that a number of US states pitched for expanding economic ties with China, and drawing greater Foreign Direct Investment.

The state of North Carolina sought to attract investments in areas like IT, Aviation and biotech. The US headquarters of Lenovo is in the state of Carolina. Trump’s trade wars have hit the state in a big way, and one of the sufferers have been Soy bean farmers. As a result of a 25 percent imposition of tariffs, the price of a bushel of Soy bean has dropped to 8 USD, from 10 USD in 2018.

Other US states brought to the fore the impact of tariffs on their respective economies. According to a senior official from the state of Louisiana for instance, Don Pierson, secretary of Louisiana Economic Development the state it has suffered immensely as a consequence of the imposition of tariffs. Agricultural commodities from Middle America to China are imported through export terminals in Louisiana. Pierson said that the agricultural economy of the state, as well as the logistics economy of the state, have taken a hard hit as a consequence of the trade wars. Pierson also spoke about the possibility of exporting LNG from Louisiana to China. Major investments in the state of Louisiana include Yuhuang Chemical Group (Shandong’s) decided to invest US$1.85 billion in a methanol production complex (this was one of the largest Chinese direct investments in the US). Wanhua Chemical Group invested over 1 Billion (1.2) USD in a chemical manufacturing complex in South Eastern Louisiana

A number of Chinese companies have also begun to realise, that there is need to adopt a nuanced approach too are still tapping certain US states for investment.

Another important event was the Select LA Summit. The Los Angeles Mayor Eric Garcetti and Lenny Mendonca, chief economic adviser to the California governor assured overseas investors of all possible support from the town of LA, as well as the state of California.

US States and Chinese Provinces have been at the forefront of improving economic ties between both countries. Both are likely to suffer as a consequence of not just the trade war between both countries, but also the US ban on Huawei. The tech company, according to a report published in 2016, contributes 7% of the GDP of the town of Shenzhen (Guangdong Province). Affiliates of Huawei provide employment to an estimated 80,000 people while a research facility in a nearby city of Dongguan, provides employment to well over 3,000

In conclusion, it is important for all stakeholders, not just businesses from both countries, to play their role in resolving economic and technological disputes between China and the US.  It is also important for Chinese Provinces as well as US states to play a pro-active role in reducing tensions. Both governments while realising the importance of federating units have set up official dialogues and set up other mechanisms for sub-national exchanges. It is important that these platforms now contribute towards reducing the divergences between both countries. While all eyes are on the political leadership of both countries, it is important to realise that the stakeholders in the US-China relationship are not restricted to Beijing and Washington DC.

Tridivesh Singh Maini is a New Delhi-based policy analyst associated with The Jindal School of International Affairs, Sonipat. He can be reached at [email protected]