Modi 2.0: Neighbours in the south 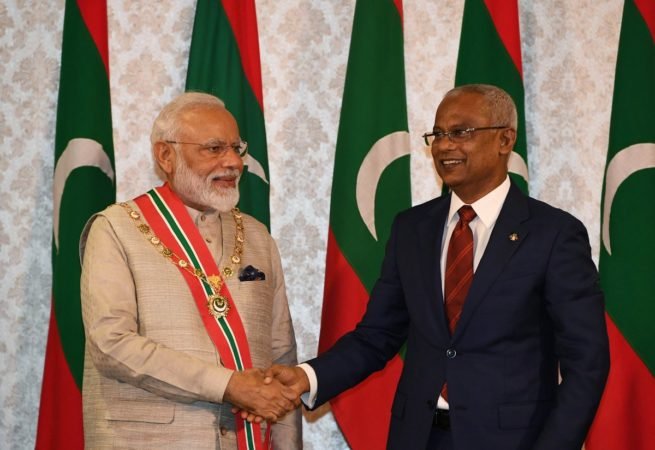 Indian foreign policy under the Narendra Modi administration has arguably undertaken an approach that deviated from the Nehruvian era and the desire of the Congress to adhere to the same pacifist principles that led to minimal engagement with the neighbourhood. Prime Minister Modi’s first foreign visits after getting re-elected to the office of the Prime Minister exhibited this phenomenon, by making it clear that there is increasing significance given to countries like the Maldives and Sri Lanka to achieve the aim of increasing regional influence. In the words of the Indian Foreign Secretary, Vijay Gokhale, who stated in a media briefing on June 6, 2019, “The choice of two neighbouring countries, Maldives and Sri Lanka, underlines the continued emphasis that the government lays on the Neighbourhood First policy.”

Prime Minister Modi paid a state visit to the Republic of Maldives on 8-9 June 2019 at the invitation of President Ibrahim Mohamed Solih. This was a continuation of several top-level exchanges between the two governments in the past eight months, with President Solih choosing India as his first destination for an official visit in December 2018 after getting re-elected. The importance of a state visit cannot be undermined; a status usually reserved for the Heads of States and therefore, a gesture of utmost respect that was extended by President Solih to India and its Prime Minister. The decision to confer Prime Minister Modi with the Order of Nishan Izzuddeen, the highest award that is given to foreign nationals clearly signifies the importance that President Solih places on maintaining close relations with the Indian leader. If that is not indication enough, Prime Minister Modi also addressed the Majlis, the Parliament of the Maldives. In a media briefing on June 8, Foreign Secretary Gokhale “reiterated that the first act of this Majlis after they were sworn in earlier this year was to invite the Prime Minister.” While the visit was an opportunity to review the growing bilateral relationship between the Maldives and India, the Prime Minister also undertook a short but meaningful visit to Sri Lanka on 9 June at the invitation of President Maithripala Sirisena. This was the first visit by a foreign leader following the terror attacks of 21 April 2019. Serving as a clear message of solidarity, the visit represented India’s commitment to stand against terrorism in the region and with the victims through their tragic times. While the visit was short, it was also an opportunity to review the partnership between both countries and express the intent to commit to a way forward based on building mutual trust, confidence and sensitivity.

The Prime Minister’s address to the Majlis consisted of five important messages, as outlined by Foreign Secretary Gokhale in the briefing. The first was ‘democracy is a common goal for both countries’, and a celebration of the conclusion of the elections in both countries wherein the strengthening democracy has contributed to development and stability. The second was prioritizing the Neighbourhood First policy, for which he claimed the mantra of his government “Sabka Saath, Sabka Vikas aur Sabka Vishwas” (together with all, for the development of all and with the trust of all) was not merely applicable only to India but rather was the “cornerstone of the government’s foreign policy and approach in the larger world, especially in the neighbourhood.” The third was tackling the common problem of climate change, working together to mitigate problems and ensuring environmental sustainability. The fourth was the challenge of terrorism and calling for “meaningful and result-oriented discussions” on the same, and he declared that “state sponsorship of terrorism is the biggest threat.” The last was focusing on the Indian vision for the Indo-Pacific and referring to the S.A.G.A.R. Doctrine, which stands for Security and Growth for All in the Region. Stressing on the principle of inclusiveness, he stated that India will “endeavour to develop the capacity of other countries in the region, to reach out to them in times of disaster with humanitarian assistance, and work for shared security, prosperity and a bright future for all.” The address to the Majlis was an honour and an opportunity and Prime Minister Modi used it as a platform to establish clearly India’s desire to emerge as a “capable, strong and prosperous” country that will be a “robust pillar of peace, development and security not only in South Asia and Indo-Pacific but in the entire world.”

The existing role of China in the region will continue to be a threat and motivator for Prime Minister Modi to continue pursuing the Neighbourhood First policy with such vigour and zeal, keeping in mind that China is the greatest hurdle in India’s path to achieving its foreign policy objective of rising as a dominant regional power. Dr. Shishir Upadhyaya, a former Indian naval officer, noted that “by 2018, China’s influence in Sri Lanka, the Maldives and Bangladesh had expanded significantly” which could be seen when the pro-Chinese government of Maldivian President Abdulla Yameen asked India to remove its gifted helicopters and crew from the country and ‘banned’ Indian workers from entering the country and when the Mahinda Rajapaksa government of Sri Lanka in 2014 openly hosted a Chinese submarine and established deep economic ties with China. The unchallenged influence of China can be seen to have pushed India to become active in the region and while the political environment has changed considerably, Prime Minister Modi’s visit emphasized the urgency and significance of the Neighbourhood First policy for Indian interests. One could clearly observe this when Prime Minister Modi, in his address to the Majlis, stated that “our [India] development partnerships are to empower people, and not to weaken them. Nor to enhance their dependence on us. Nor indeed to impose the impossible burden of debt on the shoulders of generations yet to come.” It does not take much to link that statement to the Chinese practice of debt-trap diplomacy, which has put both the Maldives and Sri Lanka in vulnerable positions and threatens Indian strategic interests in the region. Dr. Upadhyaya claims that “Modi’s visit to the Maldives and Sri Lanka clearly demonstrates a strengthening of India’s position and a redeeming of political authority in the region, an effort at reversing the strategic influence gained by China in recent years.”

With dialogues largely revolving around counterterrorism, security and economic development, the success of Prime Minister Modi’s visits to Sri Lanka and the Maldives should be seen as an opportunity to expand Indian influence in the Indian Ocean region as opposition to Chinese dominance. Committed security and developmental partnerships with countries in its neighbourhood like the Maldives and Sri Lanka seems like the only sustainable form of maintaining influence in the region and a return to Nehruvian principles or a disregard for prioritizing the relationships with countries in the region will simply result in the overshadowing of Indian ambitions and desires by the return of unchallenged Chinese influence. India’s position in the region is stronger than ever before and it will be interesting to observe how Modi 2.0 undertakes initiatives to achieve long-term goals in the region.