Can INS Vikrant be a game changer for the Indian Navy? 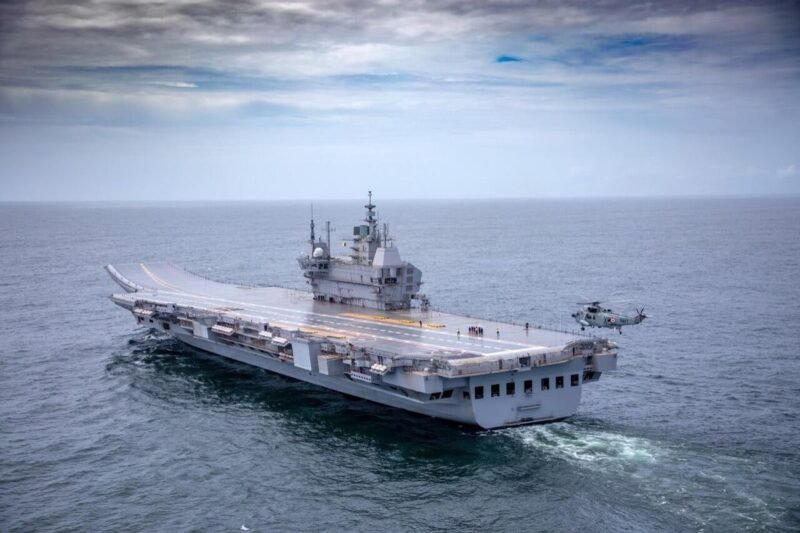 The Indian Navy on Friday added significant firepower to its arsenal by commissioning the aircraft carrier ‘INS VIKRANT’ in an event held in the Cochin Shipyard Limited in Kerela. Prime Minister Narendra Modi inaugurated the aircraft carrier with officials from the three-armed forces and other dignitaries present during the event. The addition of the new ship takes the number of operational aircraft in the Navy to two, the other being the INS VIKRAMADITYA.

The INS VIKRANT marks many firsts in the history of India’s Defence Forces. The new 45,000-tonne warship is the first to be designed and developed Indigineously in the country with a cost of ₹ 20,000 crores. The aircraft carrier is 262 meters long and 62 meters wide with a maximum speed of 28 knots and potential endurance of 7500 nautical miles. The ship has 2,200 compartments, designed for a crew of about 1,600, including women officers and sailors. The carrier is designed with a high degree of automation for machinery operations, ship navigation, and survivability. The page is equipped with the latest state-of-the-art equipment and systems. That makes it the largest warship ever built in India.

The aircraft carrier can accommodate 30 aircraft comprising MiG-29K fighter jets, Kamov-31, MH-60R multi-role helicopters, in addition to indigenously manufactured Advanced Light Helicopters (ALH) and Light Combat Aircraft (LCA) (Navy). The carrier group also utilizes the novel method of operation known as Short Take-Off but Arrested Recovery (STOBAR), which enables the INS VIKRANT to be available with a set of ‘arrester wires’ for their recovery onboard.

The commissioning of the INS VIKRANT puts India on the selected list of countries which has demonstrated the capability to design and operate an aircraft carrier of more than 40,000T. Earlier, only the United States, the United Kingdom, France, Russia, and China had such technological prowess to build such carrier group ships. The operationalization of the carrier marks a paradigm shift in the country’s nascent defense industry which is still evolving due to low investment and bureaucratic hurdles since Independence. Prime Minister Narendra Modi has described the achievement as the path to ‘atmanirbharta’ or self-reliance.

A Boost to the Defence Sector

Recently, Indian leadership has been investing substantial resources to give new wings to the still developing defense sector industry. The government has developed the new Defense Procurement Policy (DPP) to streamline the acquisition process for the armed forces. That includes significant public-private partnerships starting from the design to the development stage. Then much talk about the Offset clause has ensured that the transfer of technology is done to the domestic partners in the country to evolve it as per Indian specifications.

INS VIKRANT has around 76% Indigenous content, which is significant compared to earlier projects like the TEJAS or Advanced Light Helicopters (ALH).

For a long time, the Indian Navy has been striving for a second Aircraft carrier to augment its fleet of the single carrier group. This is necessary to keep at least one strike operationalized when the other was for routine maintenance or immediate need. The need for another carrier group was highlighted when INS VIKRAMADITYA had to undergo significant retrofits due to an explosion in its engineering section. This has left a big vacuum for a substantial period in the INDIAN OCEAN REGION.

Former Navy chief Admiral Karambir Singh has argued for India to have a fleet of three aircraft carriers to counter the rising threats in the Indian Ocean and the Indo-Pacific region. But the proposal was thwarted by certain quarters of the Defence ministry bureaucracy and the then late Chief of Defense Staff (CDS) because of the vulnerability of the large carrier strike group on the high seas to direct attack from the enemy.

India sits on a confluence of three major oceans, which is important for its national security interests. The Indian Ocean region has seen significant activities by other state and non-state actors, which has a direct bearing on India’s overall securityThroughgh its Belt and Road Initiative (BRI)China, is making a direct footprint around South Asia, considered a soft underbelly of India. Through its ‘STRING OF PEARL’ initiative, it is developing all-weather sea ports for dual purposes. The string of pearls is seen as a means to encircle the Indian Subcontinent from the Gulf of Kutch to Myanmar. The visit of Wang Yi, the Chinese research vessel to the Hambantota port in Srilanka, has again raised the important issue of addressing the changing maritime balance of power in the Indian Ocean. The three aircraft carrier formulae are necessary to match and neutralise Chinese activities. The PLAN has three aircraft carriers in its battle group, i.e., Fujian, Shandong, and Liaoning. But the PLAN is deploying its carrier group to deter American action in the Taiwan straits and the Pacific region. So, there is an immediate need for India to move to the development of the third aircraft till china is busy engaging with the USA.

Finally, India being a large and significant player in the Indian subcontinent region means it has numerous roles to play in the area. In recent times India has undertaken various humanitarian and disaster rescue missions (HADR) in times of need for the sake of humanity. The 2004 Tsunami has seen the Indian Navy as the first responder during the crisis. India also deployed its resources in the Maldives during the water crisis in the island country.

A good start but a long way to go

The commissioning of the INS VIKRANT in the naval forces will significantly enhance its reach across the region. But India has to invest substantially in its niche defence industry’s foundations by promoting public-private partnerships and academic collaboration. The recent Ukrainian crisis has demonstrated an important lesson for the states to develop their domestic armaments to cushion against any future geopolitical and supply chain shocks.