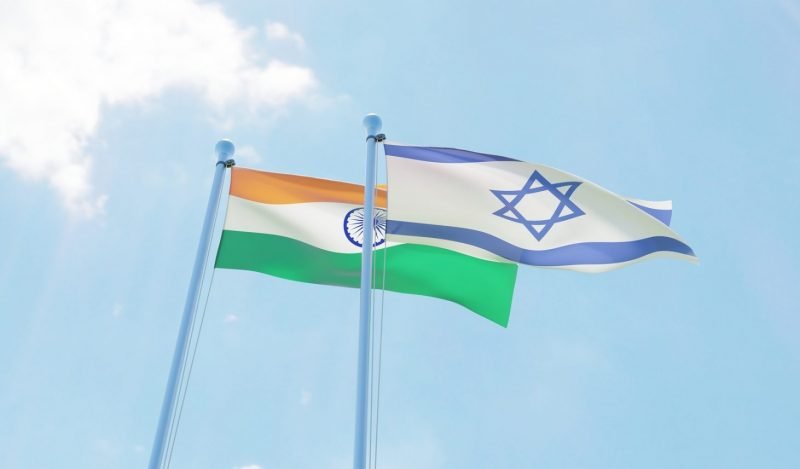 From the Mediterranean Sea to the Bay of Bengal, there are only two countries that have remained democratic and have a total commitment to democracy since the day they were formed. There are only two countries-In India and Israel. Both states face a common threat of terrorism and have difficult positions to explain with respect to their national security. These similarities make them natural allies or partners. However, in 2019, it was the first time that India changed its decades-old position on the two-states theory; it denied observer status to a Palestinian body at the United Nations (UN). For decades, India has observed both Palestine and Israel as separate countries. This instance was a landmark shift by India from its two-state theory, signalling India’s growing relations with Israel. A significant evolution in India’s policy can be seen with respect to Israel, from being pro-Palestine to balancing between the historic ties and decades-old friend Israel. And now in recent years, India’s closeness with Israel and its string of bilateral relations are perceived as pro-Israel.

The Israeli state was formed in 1950 and was recognised by India, but diplomatic ties were not established. India observed that both Israel and Palestine were separate states. There was always a cold shoulder from India toward Israel. For India in recent years after its independence, close ties with the Arab world were necessary over-friendly relations with Israel. India was the only non-Arab state to vote against the uN-partition plan of Palestine and to recognise the Palestine Liberation Organisations as the representatives of Palestine, thereby establishing diplomatic ties. However, even after a strong inclination towards Palestine, Israel and India remained friends at an unofficial level.

During the 1962 Indo-China War, then Israeli Prime Minister David Ben Gurion wrote to the Indian Prime Minister Nehru, expressing Israel’s “fullest sympathy and understanding” and even offering to provide arms to the Indian army. These letter exchanges were discovered from the Jeuresalm archives, which also showed that India had asked Israel for weapons during the war of 1961. But Nehru requested to deliver the weapons on a ship with no Israeli flags, in order to not upset Arab world allies. However, Ben Gurion said ‘No flags, no weapons’, but then the weapons were sent in an Israeli ship flying the Jewish state’s flag. These archives reveal that India had good connections with Israel even before formal ties were established.

India’s foreign attitude towards Israel was a result of the ongoing post-WWII dynamics. The world was divided into two major blocs—the socialist and the capitalist. India at that time was heading the Non-Alignment movement. Furthermore, India could never openly recognise Israel due to its own territorial disputes. The Israeli state was created by dividing the state of Palestine among Jews and Arabs. So, if India supported the creation of Israel, it meant India encouraged the partition of territory, creating severe repercussions on the Kashmir issue.

A departure from Nehruvian policies

In 1992, India officially established diplomatic relations with Israel. This balancing act was a result of a series of domestic and world political changes. At home, P.V. Narasimha Rao became the Prime Minister who moved away from the Nehruvian policies and is referred to as the “Father of Indian Economic Reforms”. On the other hand, the world’s political dynamics changed with the break-up of the Soviet Union and the 1990 Gulf War. All these events combined contributed to India’s changing position against Israel. Additionally, the Palestine Liberation Organization had disrupted its image on the global level by siding with Saddam Hussein in his invasion of Kuwait, which developed a sense of resentment among the Arab world for the PLO. However, even after establishing diplomatic relations in 1992, the hypocrisy in India’s nature against Israel continued.

At the same time, India opened an embassy in Tel Aviv in 1902; at the same time, it opened a representative office in Gaza. Despite the split between the Palestine movement and India, the PLO supported the PLO and accepted the two-state solution. The two-state solution entails a self-sustaining state of Israel and an independent state of Palestine to the west of the Jordan River. Furthermore, in a series of UN resolutions, India supported Palestine. Ranging from the 2003 UN vote on Israel’s construction of a separation wall; to the UN vote in 2011 on granting Palestine full UNESCO status; and then a co-sponsored UN resolution on granting Palestine a “non-member” observer status. All these actions went in parallel with India developing its relations with Israel through defense corporations and growth in agricultural, scientific, and technological fields. Under the Vajpayee administration, India first bought search drones from Israel, as India understood that Israelis were the masters of the finer aspects of security. This was a realist foreign policy, indicating a positive turn. During this phase, it was the first time an Israeli leader-Shimon Parez-came to India for an official visit, four decades after recognising Israel. This new policy shift was welcomed, and a series of meetings between Indian and Israeli leaders took place. These changes in India’s foreign policy indicated that the IFP post-Cold War was pro-India rather than anti-capitalist. After decades of non-alignment and pro-Arab policy, India established ties with Israel.

Israel is India’s third largest defense partner. Even after a growing and strong defense partnership, India had cut off arms sales to Israel.To cater to this complaint by Israel, the Modi government developed the de-hyphenated policy. Under this policy, India maintained strong relations with Israel and struck a balancing act between Palestine and Israel. A historic move under this policy was the UN abstentions at the UNHRC and at the ECOSOC, where India voted in favor of Israel. The de-hyphenated policy was observed during Narendra Modi’s visit to Israel, where he became the first Indian Prime Minister to visit Israel but did not visit Ramallah. New Delhi’s policy indicates that it will deal with the two states separately.

The de-hyphenated policy is complemented by the Arab world’s establishment of ties with Israel. Sudan, Morocco, Bahrain, and the UAE signed agreements with Israel establishing diplomatic relations in 2020. And Israel maintains full diplomatic relations with its Arab neighbors—Egypt and Jordan. The policy is an exemplary example of a balancing act whenever the situation demands India’s shift from one side to another. This was seen in India’s position at the UN vote to recognise Jerusalem as the Israeli state’s capital, where India voted against Israel. This balancing act is a policy work in progress. India is trying to use its policy for its own advantage first. This policy is not necessarily pro-Palestine, like in the Nehruvian phase, nor is it explicitly pro-Israel, but this policy of striking a balance between the two nations is pro-India.

For too long, India’s policy was anti-apartheid, anti-zionism, anti-west, anti-capitalist, anti-imperialist and not sufficiently pro-India. India’s foreign policy has become pro-India now, post-Cold War. What happens in the rest of the world and what position India takes is defined by what is in India’s supreme interest. This change encourages stronger bilateral relations with Israel. In 2016, it was the first time a Bollywood film was filmed in Israel, opening Israel to the Indian population. This, combined with Israel’s image as a start-up nation, has encouraged Indian students to consider Israel as a study-abroad location. In my view, India’s shift in its policy towards Israel is a welcome change.