G20 Presidency: What could India bring to the table? 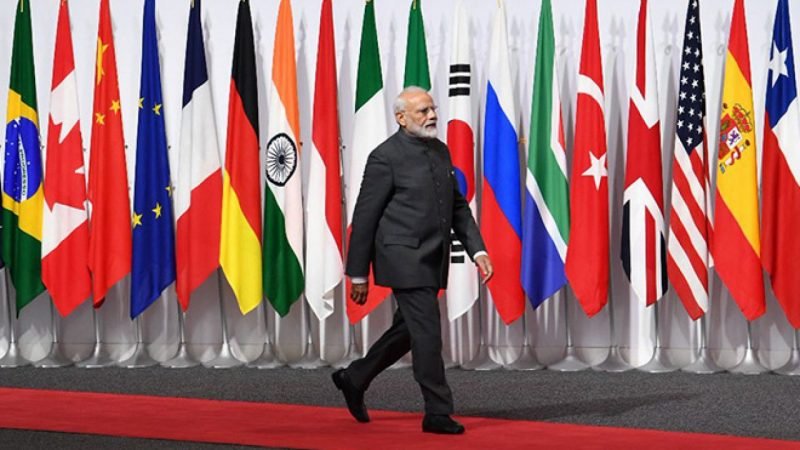 For the first time in the history of the G20, India will host the summit from 1st December 2022 and will convene the G20 Leaders summit in 2023. The G20 or Group of Twenty is an intergovernmental forum comprising 19 countries and the European Union (EU). It works to address major issues related to the global economy, such as international financial stability, climate change mitigation, and development. The G20 members represent; two-thirds of the world’s population, 85% of Global Gross Domestic Product, 75% of international trade, and 80% of global investment in research and development.

India was supposed to be the G20’s president in 2022, which would have coincided with the country’s 75th anniversary of independence. It had worked out a swap with Italy, which was set to chair in 2022 but decided to take over in 2021. India made another swap with Indonesia at the G20 Summit in November 2020, with Indonesia taking over the leadership for 2022.

The Group of 20, often known as the G-20, is an organization made up of Finance Ministers and Central bank Governors from the world’s largest economies, including many developing countries as well as the European Union. The G-20, which was founded in 1999, encourages global economic growth, international trade, and financial market regulation.

G20 was established in the year 1999; post the Asian Financial Crisis of 1997, where the motive was to manage Global Finances. Also, after the 2008 crisis, the head of state of the member countries decided to attend G20 and had a keen discussion to solve not only global finances but various important issues that the world is facing.

During the last five years, G20 was held under the aegis of various nation-states with miscellaneous themes for instance, in 2018, Argentina held the summit under the subject “Building Consensus for Fair and Sustainable Development,” while Japan hosted the summit in 2019 under the theme “Global Economy, Trade and Investment, Innovation, Environment and Energy, Employment, Women Empowerment, Development & Health.” Saudi Arabia had hosted the event in 2020; with the theme “Realizing the 21st Century’s Opportunities for All” The Italian theme for 2021 was “People, Planet & Prosperity,” and Indonesia’s theme for 2022 was “Recover Together, Recover Stronger.”

In a nutshell, over the past five years, every country that hosted the G20 summit majorly covered almost all the important issues the world has been facing together. India, being an emerging power and the voice of 1.30 billion people with a democratic polity, holds water in global governance. Similarly, in 2023, India will be assuming office for the G20 summit there are various contentious issues which need urgent attention that New Delhi could fit into its agenda as a President.

What could India bring to the table?

Firstly, it remains pertinent for the world that escalating tensions between Russia and Ukraine come to a halt. This conflict which started over the piece of land has now taken a different trajectory and emerged as a conflict between Russia and the West. Maintaining its balanced stance, India needs to neutralise this situation by introducing peace talks between the two nations. We need to explore and implement the best possible measure to reduce the friction between Moscow and Kyiv as this conflict not just affects one of the oldest strategic partners but also challenges the root principle of Indian diplomacy. Furthermore, the conflict has affected both countries but has also triggered a global financial crisis post-Covid-19 pandemic. It has been a difficult task for the entire world to sustain post-post-pandemic which has disrupted the global supply chain.

Second, in recent years, trade relations between the United States of America and India have been strong. Russia and Ukraine are now involved in a territorial dispute and Moscow being one of New Delhi’s most trusted strategic partners, India’s tactical assistance for Russia’s economy might result in a schism between Delhi and Washington. Former President Donald Trump referred to India as the “tariff king” during a campaign rally, and afterwards withdrew India’s GSP (Generalized System of Preferences, which allows a limited number of items tax-free access to US markets) status. This is a major source of concern for Indian traders, and it might have a negative impact on the Indian economy. India needs to find cheaper alternatives of commodities it primarily imports from the USA. Nevertheless, ‘Make in India’ initiative alongside the ‘Go Local’ policy could help in bridging the trade gap during this crisis. India needs to hitch knots with various countries in this fragmented world to fill the trading gaps.

Many members of the G20 have been a victim of terrorism for the past few decades. Attacks like 9/11 in the USA or 26/11 in India’s Mumbai are a few examples of such activities. In the present scenario where the world is orchestrated by ideologically rigid leaders and countries are on of each other’s throats countering terrorism is a matter of utmost importance as this will act as a latch towards attaining interests. Ways and forms of terrorism have evolved over the period of time with rapid advancements in the field of digitalisation.

Organisations such as ISIS, Taliban, Lashkar-e-Taiba & Jaish-e-Mohammad are haunting goals of world peace. G20’s collective stand on countering terrorism has been exceptional in nature. With changing dynamics of terrorist attacks around the globe its time when emphasis shall be given to a collective platform for cyber security. India could add its IT infrastructure in this sector to counter digital terrorism. It would be like hitting two birds with one stone i.e. it will help in reducing terrorism across the world and will also create employment for a large group of youths. Skills like ethical hacking, toolkit maintenance & strategy designing could also be promoted through national and international competitions which will not just upscale their skills but will also help in filtering the best individuals possible for the job.

Apart from this, there is a dire need for a robust and nuclear-free world. In January 2022, P5 members reaffirmed what Ronald Regan had once articulated that “a nuclear war cannot be won and should never be fought”  which is now contradictory to the immediate nuclear threats declared by Moscow on a non-nuclear state. It has been predicted that China will establish benchmarks for its vertical proliferation i.e. it is going to increase the count of its nuclear arsenal thrice to its present count by 2030. This is a matter of grave concern as China has been the least transparent member among the P5 about its nuclear proliferation. Beijing’s low yield test in its Lop Nor testing site in Xinjiang province still lacks clarity on her intentions on top of which, one of China-bound cargo ships was asked to leave Hambantota port in Sri Lanka when it was found containing Uranium hexafluoride Such unanticipated moves of China have left the world to ponder upon the fact that  we are moving away from a nuclear-free world

Therefore, It is important for us to understand that if the count of the nuclear warheads keeps on increasing that day isn’t far when they will be used. Therefore, the members of the G20 summit shall work together for total disarmament to make this world free from nuclear weapons and protect its citizens from the horrors of the nuclear holocaust. India’s former Prime Minister Rajiv Gandhi proposed an “Action plan for ushering in a nuclear-weapon-free and non-violent world order” for complete disarmament in June 1988 which aimed to attain complete disarmament of the nuclear weapons by 2020 by a step by step process. This goal can still be achieved if the entire world works together as one under the aegis of India’s presidency of the G20.

Also, the repercussions of the Covid-19 epidemic must be studied. Global trade ties have changed drastically since the pandemic which has impacted practically every country’s economy and produced the world’s largest economic setback in history. This is a source of significant concern not just for third-world countries suffering from economic and social crises, but also for developed countries such as the United States and the West.

It’s about time for India to raise its voice in support of a transparent New Economic Order and building a prosperous and just world. Unreasonable bans on certain commodities from various countries limits commerce between states when trade liberty exists. Extraordinary taxes and levies on items should not limit their use by the common man, resulting in an overall rise in the world’s standard of living. India will also need to continue trying to increase its competitiveness and ease of doing business under the aegis of G20 as a presidency.

Finally, health and well-being is one of the most significant SDG goals set by the United Nations. Every G20 member must work together to achieve this aim, especially in the aftermath of a pandemic, since an individual’s health is critical, especially given how many people have lost their lives as a result of the covid-19 pandemic. India emerged as a reliable ally to count upon amidst crisis and has provided medicines and vaccinations to those countries in need, demonstrating to the rest of the world the true meaning of Vasudhaiva Kutumbakam. India wishes that all of its fellow members would follow suit.

In a nutshell, India has a long way to go, despite the fact that it has enormous potential to turn the tables on the international stage due to its political, diplomatic, and democratic influence. India’s presidency has the ability to assist states in hardship as they emerge from the dreads of the covid-19 pandemic, as well as to accept diverse perspectives and opinions about the important concerns that remain. India may also provide a formidable platform for India’s national interests and global development aspirations to be promoted.

Neekur and Shivangi are students at Babasaheb Ambedkar College of Law, Nagpur