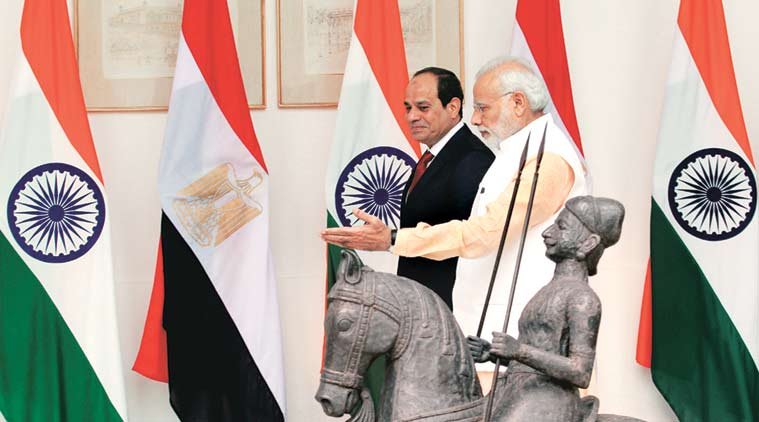 Substantiated by multiple archaeological and historical evidence, relations between two of the world’s oldest civilization, India and Egypt have witnessed a long history of close contact from ancient times. The relationship in modern times starting from the joint correspondence between Mahatma Gandhi and Saad Zaghloul, in their joint venture of getting rid of colonialism, blossomed into an exceptionally close relationship under the leadership of Gamal Abdel Naseer and Jawaharlal Nehru, leading to a Friendship treaty being signed between the two nations in 1955. The mutually beneficial and warm bilateral relations have been characterised by the shared visions of Afro-Asian solidarity and Non-Aligned Movement.

Experiencing very similar predicament and faced with a shared set of developmental challenges, has been instrumental in bringing two nations closer to equally learn and grow in their individual trajectories. Relations based on historic roots have been constantly nurtured and sustained by close political understanding and have reached to the significant level of comprehensive multi-faceted engagements.

The recent telephonic conversation between Prime Minister Narendra Modi and President Abdel Fattah El-Sisi, in wake of COVID-19 pandemic assuring India’s all possible support to ensure availability of pharmaceutical supplies during these difficult times and both the leaders agreeing on the utility of continuous exchange of experiences and best practices, in order to learn from each other, is a reflection of the close bonds that both the nations share and the substance attached to the bilateral relations. However, the momentum in relations and a shared desire to take it to a higher level needs to be emphasized in order to mitigate the looming crisis.

Located between the countries of Africa and Asia, Egypt has been the centre of trade and enterprises in the Middle East and remains the crossroad between the east and the west. The trade relations based on ‘Most Favoured Nation‘ clause between both the nations have been on the consistent rise and the substantial presence of Indian projects and ventures in Egypt enhancing mutual stake and benefits in between, underline the existence of a range of broad potential in trade engagements. According to the Egyptian Central Agency for Public Mobilization and Statistics (CAPMAS), India was Egypt’s 10th largest trading partner in the year 2017-18. It was the 7th largest importer of Egyptian goods and the 11th largest exporter to Egypt for the same duration.

However, amidst rising concerns about the grave economic implications of COVID-19 particularly on developing economies, greater engagement on the economic front between both the nations appear compelling. Both these developing economies with their interest in greater investment flows, foreign capital and in quest of being a manufacturing hub are going to be severely affected by the International business environment which is likely to be characterised by protectionist tendencies and inward-looking policies in Post-COVID World. This convergence of interest calls for the greater cooperation & understanding on bilateral front exploring new areas of cooperation and in their effort to shape the global business order amicable to their interest. Adequate interactions among Govt. bodies, Private sector, Policymakers and Think Tanks with an efficient mechanism in place can be of great help in this regard.

The fact that Covid-19 pandemic has made us aware of every touchable surface that could transmit the disease, it is expected that more contactless interfaces and interactions, with automation and digital fundamentals driving the business, will follow in Post-COVID world and this provides scope for cooperation on capacity building training programmes to leverage the rich demographic profile of both the nations and adapt to the paradigm shift in the business world. There is also a need to strengthen cooperation on building digital infrastructure in both the nations and India with its experience in an initiative like ‘Digital India’ must take the lead.

As outlined by the then India’s Ambassador to Egypt, Sanjay Bhattacharyya in an interview to an Egyptian media house in 2017, “India and Egypt can work much more to diversify the trade basket such as agricultural commodities and manufacture and other items help in boosting trade exchange between the two countries.” The trade basket between both the nations needs to be diversified by tapping on the untapped potential and mechanisms like Joint business forum must be given their due space to explore the scope of cooperation.

Faced with the twin challenges of terrorism and growing radicalisation, cooperation in counter-terrorism operations through efficient institutional linkages between the two military establishment, joint training & military exercises, information sharing mechanisms needs to be strengthened for further tangible advances on this front. Deeper cooperation in the fields of the defence industry and R&D, including the joint production of defence equipment which were part of the discussion during the visit of the then Defence Minister, Nirmala Sitharaman to Egypt in 2018 needs to be carried out through regular exchanges.

The recent attempts to create discord in the relations between India and the Gulf by various Twitter handles impersonating Arab personalities reminds us of the threatening dimension of social media and cyber world, and calls for greater cooperation at all levels to curb such new-age menace, as an individual nation can never be the right framework to deal with these global problems. Also equally appealing is the need to strengthen confidence-building measure for greater resilience in the relations between both the nations.

Being among the ten largest troop and police-contributing countries in United Nations missions, India and Egypt have been at the forefront in the maintenance of international peace and security, and have been a consistent votary of rule-based global order. The shared commitment to achieving a comprehensive reform of the United Nations, including the revitalization of Security Council, require intensification of bilateral relations at all levels with regard to issues pertaining to the work of global governance. With multilateralism facing worst of its crisis in terms of diminishing credibility, a wide political consensus between both the nations acknowledging the set of global problems that humankind faces or is likely to face, have the ability to raise the diminished profile of multilateralism by working on a range of complementaries in different multilateral fora. These two stabilising force in their respective region with the shared history of the Non-Aligned Movement have a larger responsibility to work towards shaping agendas and developments at the regional and global level. Therefore, given the understanding based on a long history of contacts and cooperation on bilateral, regional and global issues, India and Egypt have a much significant role to play in the unfolding new world order.

Aman Mehrotra is a Former Research Intern at The Kootneeti. His areas of interest include Indian Foreign Policy vis-à-vis, Africa.