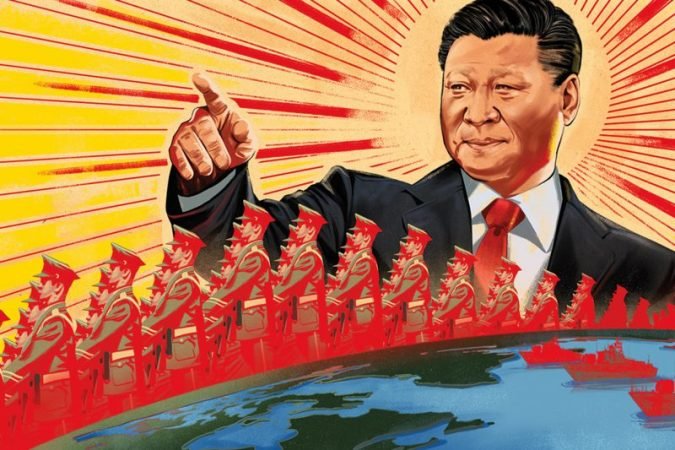 China’s growth in the world marked a stunning shift from Western-dominated geopolitics to Asian-dominated geopolitics. The Chinese claim that the Asian continent has been resolved into artificial topographies. A new world order based on the European imagination will be settled by the Asian century, according to China. A dramatic change in the ultramodern transnational system, the Belt Road Initiative aims to rewrite the world’s boundaries. (YEOH, 2009)

China’s advent into South Asia has challenged India’s dominance. For example, Beijing did not have a delegacy in the Maldives until 2012, when it offered $63 million in infrastructure subsidies. The Chinese investment in the Maldives aims to protect its commercial and energy routes, which pass through the Gulf of Aden into the Strait of Malacca. China would benefit from a strong presence in the region, while India would suffer. Maldives’ frugality is fluently told by Chinese plutocrats For $4 million, China acquired an uninhabited islet near Male for 50 years. (Georgetown Journal of International Affairs, 2021) As for the CPEC (China-Pakistan Economic Corridor), Beijing has invested $21.5 billion in Bangladesh’s infrastructure and $62 million in Gwadar’s security. (EurAsian, 2021)

Interactions between India and China reflect the contours of a looming power struggle in the 21st century, according to Indian diplomat Shyam Saran. China’s successful expansion into South Asia is now reaching India. The issue is geo-economic. With the BRI, India’s neighbours have benefited from Beijing’s economic boost, for example, China had surpassed India as Bangladesh’s main trading partner. Between 2009-13, China was sending vital government supplies without any customs problems. According to the Stockholm International Peace Research Institute, China bought 82 percent of all defence and arms. (SIPRI). Bangladesh was also a key buyer of Chinese arms and defence products worth $25 billion. (Indian Express, 2020)

Shyam Saran also stated that China’s rapid diplomatic and economic development has harmed India’s relations with its neighbours. For example, in Sri Lanka, China moved to provide economic, military, and diplomatic support to the government in its fight against the LTTE (Liberation Tigers of Tamil Eelam). The largest source of foreign direct investment and lending power in Sri Lanka is China, which acquired Hambantota, a crucial piece of infrastructure in the Indian Ocean. China’s strategic investment in Sri Lanka is over $15 million. (Bhat, 2018)

Bhutan is China’s Bet. The Chinese offered a startling $10 billion assistance package for grants and direct investments at low-interest rates. Bhutan is a landlocked country, whereas Nepal sought help from both India and China. Nepal has often accused India of being a regional big brother. Nepal changed alliances to lessen reliance on India in trade and security. (The Diplomat, 2021)

The expanding Chinese presence in the region enables tremendous economic potential. Chinese economic might has already invested $150 billion in the last decade, and more is promised under BRI. China claims BRI is a strategic debt. China thus has a clear objective for regional economic unification. It is now apparent that China has never intervened militarily in the region. For these reasons, China is still a valued partner in most South Asian states. It upsets the structural power balance in the region, which India controls. China’s expansion in South Asia has hampered Delhi’s economic and security interests. The failure of India to emerge as a major economic locomotive in the area, along with its complex history, has spurred China’s economic expansionism. China has benefited from the region’s democratic weakness. Indian aspirations for liberal values to take root in the region never materialised. Identity politics and nationalism raged. We can assess China’s position in the region by looking at Myanmar. The UN resolution condemning Myanmar’s action was defeated in Myanmar. China keeps pouring money into the region. (Pal, n.d)

In the past, China’s principal purpose was to obstruct Beijing has also used a variety of tools to build partnerships with minor regional countries in South Asia, preventing larger powers like India from gaining regional agreements. This economic expansionist toolset is explained as follows: (The Economic Times., n.d)

Further, South Asia has all the ingredients for the Chinese economic model: densely populated, developing economies comparable to China a decade ago. The toolbox for the same is as follows: (Pal, n.d)

Instead of engaging in organic indigenous processes, Beijing’s design of integrating Asia Africa Europe tries to destroy South Asia’s eventuality as an independent indigenous expression and India’s dread of influence. China aligns low-income countries’ structures and trade initiatives with its built-in road network. This enables China to pursue economic opportunities in the global value chain. BRI allows these governments to lessen their reliance on the Indian market. Rather than a sprinkling of vital customer countries like Pakistan and a system of profitable patronage with countries like Bangladesh, Nepal and Sri Lanka suit its global security and marketable interests. The South Asian subcontinent is only one component of China’s Eurasian vision. Beijing cannot tolerate regionalism because it would jeopardise its role as Eurasia’s principal security supplier. China Due to its location at the crossroads of international Asia and the Indian Ocean region, both countries have long collaborated on the Bangladesh issue. This lucrative China-Myanmar route would connect Kolkata to Kunming in southeast China. (The Diplomat, n.d.)

The China-Pakistan Economic Corridor has shifted Pakistan’s geopolitics. A prosperous China-Pakistan route between Kashgar and Gwadar. Gwadar, a vital port across the Strait of Hormuz, sees approximately one-third of the world’s canvas trade travel through it. The plant structure design would run through Gilgit Baltistan, a disputed border between India and Pakistan, causing significant anxiety in India at the time. Rather than a sprinkling of vital customer countries like Pakistan and a system of profitable patronage with countries like Bangladesh, Nepal and Sri Lanka suit its global security and marketable interests. (United States Institute of Peace, n.d.)

In Sri Lanka, Shyam Saran refocused on China carving up a separate international marine sphere for itself in Asia, consigning India to a Chinese late Asian order. Beijing is willing to change Asia’s bold landscape and normative framing. Despite the inclination for India, the Hambantota harborage was hampered by a significant date commitment of approximately worth of loans from China. Between 2005 and 2012, China advanced Sri Lanka only 2% in direct subventions, the remainder through loans at commercial interest rates, putting a strain on Sri Lanka’s foreign debt, which grew to 94 percent of GDP by 2015. (Bhat, 2018)

Quad’s birth ushered in extraterrestrial might. It was reactivated after India declared vocal opposition to the Belt Road Initiative in May 2017 before the Trump administration reassigned an old National Security Council member to the Belt Road Forum. The Quadrangle was formed in November 2017 by India, Australia, Japan, and the US. Many bells and roads are expected in a globalised world. Tillerson slammed China’s raptorial economics in Asia and acknowledged that the US had quietly challenged the BRI. The US is allowing the flow of private assiduity capital into the region’s development mechanisms. An Indo-Pacific Quad normative and profitable vision is formerly taking root, as evidenced by recent India-Indonesia ties. The quad itself is still muddled by variations in geographical compass, military capability, and political will that hinder collaboration. The Quad has met three times since 2017 as trilateral and bilateral platforms and exercises gain. In South Asia, for example, India and Japan are collaborating closely under the Asia-Africa growth corridor.  (Rudd, 2021)

By institutionalising values through local platforms like the Bay of Bengal Action for Multi-Sectoral Specialized Economic Cooperation and the Indian Ocean hem association, India must walk the talk. It will also have to review its relations with China. It must be applauded that China’s long-term political problems prepared to respond to China’s ferocity in the medium term and seize China’s benefit in Despite decades of economic surpluses and profitable interdependence with the US, India has not forgotten that the US controls a long-term geopolitical foe. However, South Asian developing nations are unlikely to reject BRI investments, despite certain fiscal recriminations. (Rudd, 2021)

Arjoma Moulick is a student of masters of arts from Jamia Millia Islamia, New Delhi.